"Well!" returned Scrooge, "I have but to swallow this, and be for the rest of my days persecuted by a legion of goblins, all of my own creation. Humbug, I tell you! humbug!"   –   A Christmas Carol, by Charles Dickens.

Since the Victorians re-invented Christmas, we've been inundated with fake folklore. Holly and mistletoe, repurposed from the Druids. Tree worship, ditto. Candy canes and sugarplums (whatever they are, something that rots your teeth), and the bizarre association of toy trains with the celebration of the birth of someone who never owned a railway ticket. Who's to blame?

Why, writers, of course. Writers invented all that fakelore.

Clement Clarke Moore gets 'credit' for inventing the modern Santa Claus. Of course, that's wrong on two counts: 'A Visit from St Nicholas' didn't invent him, it just tarted him up a bit, and – like Thomas Nast, the cartoonist who drew the 'elf' in the 1860s – made him rounder. Oh, and it wasn't Moore who did it, anyway. It was Henry Livingston, Jr. Livingston never sued, though. Me, I would have denied responsibility for all I was worth. Gone into witness protection.

More rapid than eagles his coursers they came,

And he whistled, and shouted, and called them by name;

On! Comet, on! Cupid, on! Donner and Blitzen. . .   –   'A Visit from St Nicholas',
NOT by Clement Clarke Moore, but by Henry Livingston, Jr, who actually liked kids.

Of course, in the 1823 version, the original names of the reindeer included 'Dunder and Blixern', not 'Donner and Blitzen'. We just think we know these things. German writer Erich Kästner, who also liked kids, called the reindeer 'Renner, Tänzer, fliegende Hitz', Sternschnupp', Liebling, Donner und Blitz', in his 20th-century German translation. Cool names.

Who invented Santa Claus, anyway? Well, the Dutch and Germans had St Nicholas, but the American version, the one that comes back to haunt us every year once Macy's puts a parade together, is the fault of Washington Irving. Irving was the biggest humbug of them all – a wiseacre from upper-state New York, a snob who wasn't all that happy about the early republic, the man who penned the snarky Knickerbocker History of New York, mainly to make fun of his Dutch neighbours. 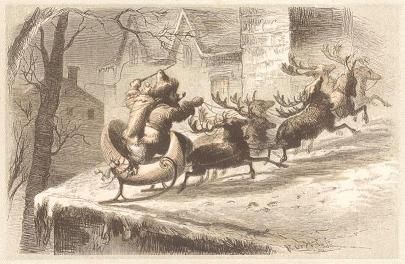 'Nor must I omit to record one of the earliest measures of this infant settlement, inasmuch as it shows the piety of our forefathers, and that, like good Christians, they were always ready to serve God, after they had first served themselves. Thus, having quietly settled themselves down, and provided for their own comfort, they bethought themselves of testifying their gratitude to the great and good St. Nicholas, for his protecting care in guiding them to this delectable abode. To this end they built a fair and goodly chapel within the fort, which they consecrated to his name; whereupon he immediately took the town of New Amsterdam under his peculiar patronage, and he has ever since been, and I devoutly hope will ever be, the tutelar saint of this excellent city.

At this early period was instituted that pious ceremony, still religiously observed in all our ancient families of the right breed, of hanging up a stocking in the chimney on St. Nicholas Eve; which stocking is always found in the morning miraculously filled; for the good St. Nicholas has ever been a great giver of gifts, particularly to children.   –   Knickerbocker's History of New York, by Washington Irving.

See what I mean? According to Irving, it was all about the early Dutch colonists claiming that St Nicholas helped them take over Manhattan. There is no record of what the Lenape thought about Irving's book. Now, that's something I'd like to read.

By the early 20th Century, the red-suited old fraud was well-entrenched in Christmas fakelore.

God give us strength. The New York Sun, you will remember, is the newspaper that printed the Great Moon Hoax back in 1835. In sixty years, they hadn't learned a thing – other than that humbug sells newspapers.

If you grew up from the 1950s onwards, you have probably run across these movies showing the 'true story' about how Santa Claus got that way. Heart-warming bilge, all of it. There's The Santa Clause, for example. Why, there was even one in which Santa, by virtue of being equipped to fly, takes on hostile space aliens. I believe Mystery Science Theatre 3000 made fun of that one, which is at least a bright spot in the holiday fare.

And there was all that folderol about Rudolf. You might argue that Rudolf was a made-up reindeer. After all, he wasn't a real Santa reindeer, one of the original eight, just one some songwriter made up. . .

I'll let you stop and think about that one. When you are sufficiently ashamed of yourself, read on.

You think this Santa back-story stuff is new? Think again. No less a luminary in the world of Kiddie Lit than Frank L 'Wizard of Oz' Baum himself penned a magnificent tome on the 'true origin' of the Jolly Old Whatsit, back in 1903. This version at least has the unusual merit of being well-written.

The work cost him much time, but the evening was long and he had nothing better to do. Finally he gave a loud and delighted laugh at the result of his labors and placed the wooden cat, now completed, upon the hearth opposite the real one.

Puss thereupon glared at her image, raised her hair in anger, and uttered a defiant mew. The wooden cat paid no attention, and Claus, much amused, laughed again.

Then Blinkie advanced toward the wooden image to eye it closely and smell of it intelligently: Eyes and nose told her the creature was wood, in spite of its natural appearance; so puss resumed her seat and her purring, but as she neatly washed her face with her padded paw she cast more than one admiring glance at her clever master. Perhaps she felt the same satisfaction we feel when we look upon good photographs of ourselves.

The cat's master was himself pleased with his handiwork, without knowing exactly why. Indeed, he had great cause to congratulate himself that night, and all the children throughout the world should have joined him rejoicing. For Claus had made his first toy.   –   The Life and Adventures of Santa Claus by L. Frank Baum.

I recommend that story, if you must read about Jolly Old St Nicholas. The cat's a pretty funny character.

Ah, me. What's a folklore fan to do? If you can't beat 'em, join 'em. Write your own Christmas legend, or Santa Claus atrocity, or whatever. Knock yourself out.

In fact, that's what these guys did. Or at least, knocked Grandma out. And made puns. We like puns. . . like 'and incriminating Claus marks on her back'.

We'll let Randy Brooks have the last word on all this heart-warming, glurgy stuff:

You may say there's no such thing as Santa, but as for me and Grandpa, we believe.

Have a very merry, all of you!