This week, let's depart a bit from the usual format, and write a story. Our inspiration will be an old poem and some screenshots.

Halloween was a big event back in 1900. Kids dressed up. People went on hayrides, sang songs, bobbed for apples, ate themselves sick, read scary stories. A Ms Shipman published a book in Cincinnati, Ohio, USA, called The Jolly Hallowe'en Book.

The Jolly Hallowe'en Book contains song parodies, such as one about a jack o' lantern, set to the 'Pussy Song', and poems to recite. One of Ms Shipman's poems got me thinking:

They say that there are other worlds

That are as big as ours,

And maybe people live on them

With all our kinds of powers.


I wonder what they think of us

If they perchance have seen,


I wonder if they try them out.

I know what should be done.

We'd swap them ours for some of theirs,

And then we'd both have fun.

Cool poem. Of course, we're much more experienced with space travel than folks in 1900. So let's throw a Halloween party. We'll invite the cast of Rocky Jones, Space Ranger, from the 1950s TV series. It's in public domain, and they've already got their costumes ready. Here goes. 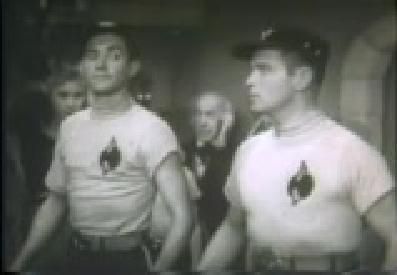 Rocky and Winky are planning to wear their Star Trek uniforms. They haven't quite got the hang of it.

'Er, Captain, are you sure Captain Sisko said something about baseball? And these communicators don't exactly work.'

'Never mind that. What I want to know is – why is Doctor Who sitting on my bridge?'

'Winky to Security! Time Lord on the bridge! Those guys are worse than Q!' 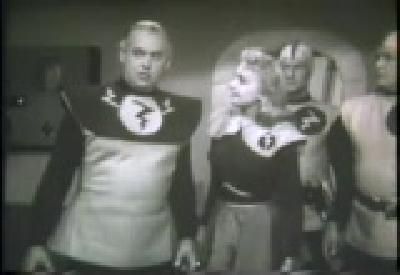 'Schatz, zese are super uniforms! I enjoy ze art-deco OTT-ness of all zis. But ze corset is too tight!'

'Do you zink ve should bob for space apples or space turnips?'

'I zink ve should bob for Knödel!' 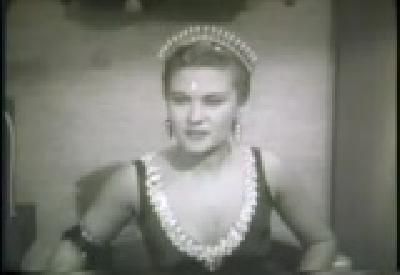 'Oh, okay, Cleolanthe, you can be the Fairy Princess. On you, it looks scary.'

'Smile when you say that, Rocky Jones, or I'll incinerate your spaceship!' 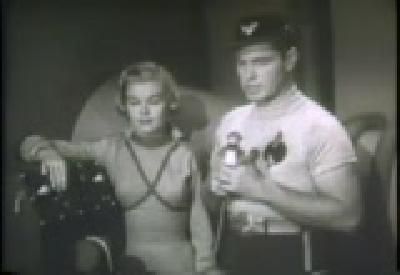 Rocky and his gf aren't quite sure about their costumes.

'Are you sure Morticia and Gomez got started this way, Rocky? It all seems sort of je n'ai sais quoi.'

'Rocky Jones, if you don't stop that, I'm going to set my phaser to 'censor'! Ewww! This is a family show!' 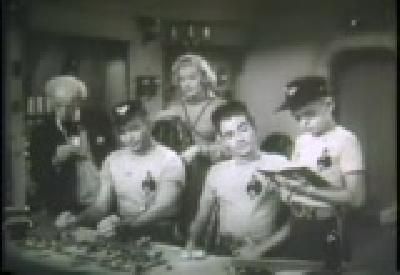 'Hey, Rocky! The manual says: To produce a regulation jack-o'-lantern, first sever a gourd-like squash of the genus Cucurbita from its stem, using a Class Three horticultural implement. Once the squash is removed from its connection to the captive flora, you may begin to carve it. Remember to set your phaser on 'stun'. . . '

'Hm. I suspect those instructions were written by Mr Data.'

'I say, Rocky. We Gallifreyans prefer to use a sonic screwdriver. As Queen Victoria once said to me at Balmoral. . . '

'That's all very interesting, Doctor. But can you get us back to our own time?' 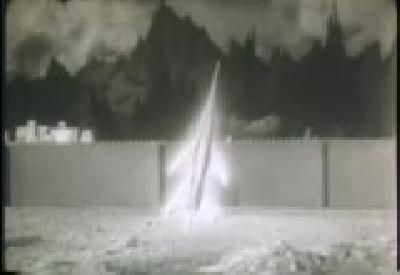 Our space friends do everything differently. After all, they wear space clothes, eat space food, sit on space chairs, and fire space guns. In fact, they are completely spacey.

Thus it is no surprise that they cannot celebrate Halloween without space fireworks. Watch the rocket take off1.

It is an awesome sight.

Happy Halloween, froods and froodettes, from Rocky Jones and the crowd!

1This demonstration took place on a closed course in an asteroid belt. Do NOT try this at home.