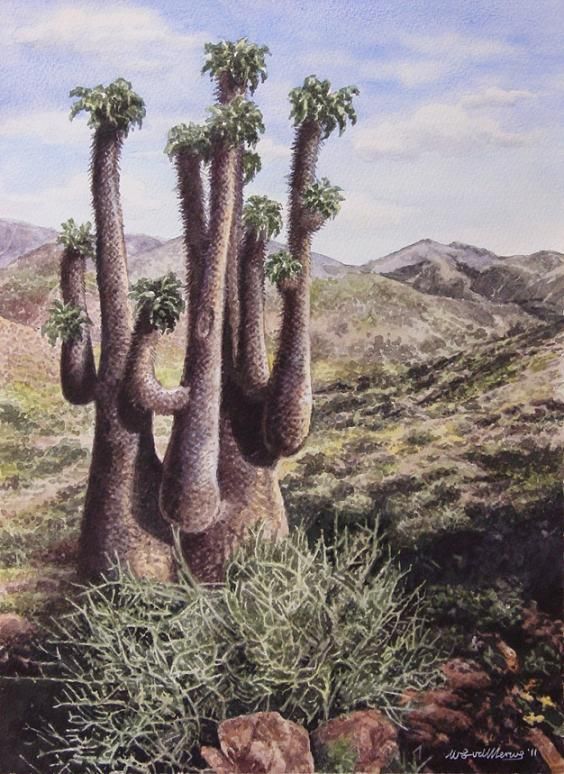 This week’s featured plant is the Halfmens, Pachypodium namaquanum. Note that ‘halfmens’ is in the singular. Sometimes you’ll see these plants called ‘half-men’ which isn’t right. ‘Mens’ in Afrikaans means ‘human’ with no connotation of male or female. So the name of this plant is, strictly translated, ‘the half-human’. In my painting you see a very large multi-headed plant growing in the stony desert hills of the Richtersveld. The tangled shrub at its base is a kind of Euphorbia, often called milk-bush over here.


This plant’s name comes from a folk tale. The people called the Nama, which are still a noteworthy presence in Namibia, are of the Khoi-San stock, which are the branch of the human family tree which split off the earliest from all the other lineages – over 100 000 years ago. The more northerly Namas have exchanged some genes with tropical African peoples, and there has also been a bit of European blood getting mixed in as well, and many of them these days speak Afrikaans rather than their original click languages. But our story goes back to ancient times, probably well before their exposure to Europeans. A particular tribe of Nama were driven out of their lands somewhere in southern Namibia. They moved to the south, which is even more arid than most of Namibia is. Eventually they came to the Richtersveld, a very barren and forbidding region. When they saw the bleakness of this desert, they longingly turned around and looked back towards their homelands to the North. The gods then changed them into plants, and to this day they still look towards the North. They became the Halfmens-plants.


These plants do indeed have their leafy tips tilted towards the North at an angle of 20 to 30 degrees. The reason for this is not completely known, but probably has to do with increasing the sun exposure of the flower buds at the tip of the stem in the Winter, so they could warm up and be fully developed by Springtime. In the southern hemisphere, the Sun shines from the North during the winter, and the angle at which the stems are inclined closely corresponds to the angle of the sun at that time and place.


Another name for these plants is Elephant’s Trunk, because of the resemblance of the stem (or trunk!) to an elephant’s trunk pointing upward. This is more pronounced in very old stems because the spines gradually wear off, leaving the trunk below the tip smooth except for warty knobs where the spines have broken off. Halfmens plants can grow to over 4 m/13 ft in height, such plants certainly being very old. The trunk rarely branches; it does however often form several trunks from the base. Damage to the growth tips can stimulate branches to form higher up. The Halfmens plants are among the tallest and most conspicuous plants in these barren deserts. Their natural distribution is limited to a region around the Orange or Gariep River, close to where it enters the Atlantic Ocean. Most of the time they grow on rocky slopes.


In spite of the resemblance, these are not true cacti, belonging to a different family, the Apocynaceae, called the Oleander or Dogbane family but actually having many members that should be familiar to horticultural enthusiasts. This family is abundant in the tropics and in southern Africa. The halfmens belongs to the genus Pachypodium, which means ‘(having a) thick foot’. This refers to the thick stems of these plants, many of which have an additional swelling at the bottom. The species name, namaquanum, refers to the Namaqua people, technically the same people as the Nama, but inhabiting the northwestern parts of South Africa across the border from Namibia. They also gave their name to the entire region, Namaqualand, a part of which is famous for mass displays of colourful flowers in years of good rainfall.


The genus Pachypodium is actually more characteristic of Madagascar than of South Africa. There are many more species that occur there. This is almost exactly the same kind of situation as with the Baobab Trees. The Halfmens is indeed most closely related to the Madagascan members of the group. There are four other species in South Africa and Namibia, but these differ significantly in the appearance of their stems and flowers. On Madagascar there are about twenty different species. Many South African gardeners get confused. They grow the tree-like Madagascan Pachypodiums thinking they are our own native Halfmens plants. There are indeed differences: the Halfmens is extremely slow-growing relative to the Madagascan species since it is a true desert plant, whereas they grow in a much lusher kind of spiny forest. The Madagascan species also have more robust spines, are generally larger and more robust with longer and more leathery leaves, and bigger flowers. But there are also lesser-known, much smaller Madagascan Pachypodiums. The group displays great diversity all over: here in South Africa two species are small, succulent shrubs with enlarged, mainly subterranean, tuberous stems. On Madagascar one species grows very flat, rarely over 8 cm/3" in height, spreading outwards rather than upwards. In between are a variety of shrubs with bottle-like basal stems and thinner ascending stems; then finally there are the large, tree-like species, some of which branch extensively and reach substantial sizes. These plants in general display a variety of growth strategies and even in a single species can have a variety of different growth forms in different kinds of environment. But all of them have adaptations to store water and survive drought periods, and they are all spiny for the sake of defense. Still, the lemurs that live in the spiny forest of Madagascar have developed a remarkable ability to clamber and jump around in these and other spiny trees without getting pricked!


In nature, the spines of this species serve as defense, but also for providing it with water! Its native deserts are quite close to the ocean, with the cold Benguela Current flowing northwards from Antarctic waters, and cool mists often come rolling inland from the coast. Dew from these mists condense on the many spines, and then drip down onto the ground at the base of the trunk, penetrating into the soil where the roots collect the moisture. These plants usually grow in rocky places, where the sparse rainfall collects and seeps down into cracks, where the roots can get at it. The Richtersveld is extremely dry, with typically 100 mm/4" of rainfall per year or less, so any water that it can get is very precious. In their habitat they often face temperatures as high as 48 degrees Celsius/120 degrees Fahrenheit during the dry Summer period.


Animals and humans make use of this plant. The flowers, which emerge crowded together at the tips of the stems, are tubular, greenish on the outside and red on the inside. They provide nectar for insects like bees and probably also sunbirds, the Dusky Sunbird in particular being a species associated with the deserts of Southern Africa. The flowers are followed by the twin, pointy fruit follicles, which in Afrikaans are called 'bokhorings' (goat's horns). From these the seeds are released, each seed bearing a white tuft of fluff which helps it to float in the wind away from the parent plant. I've seen these tufts in related plants being used by birds as well: they are excellent for making a fluffy nest lining. And for making birds with a beakfull of them look very funny and cute! A variety of insects probably munch the leaves. This plant has a poisonous sap which is clear rather than milky as in other members of its family. But some butterfly and moth caterpillars actually take advantage of this, by forming their own protective toxins from these poisons. Humans have also made use of this sap as one of the ingredients for arrow poison!


I have three little Halfmens plants in pots growing on a windowsill here at home; so far they are doing very well, although they are still quite small. This species is not frequently cultivated; apart from the slow growth rate it is sensitive to overwatering. Also since its natural range is a very dry Winter-rainfall region, it doesn’t do well outdoors in Summer-rainfall areas or anywhere there’s lots of rain. It can also not handle much frost. In cold climates, with the right care it does well indoors provided it gets some sun; even when small it makes an interesting little pot plant. Remember that its growth season is mainly in the Winter. In its natural environment it will go into a rest period and cast off its leaves during the hot Summer. But in cultivation, in lesser extremes of heat and drought, it may retain its leaves and keep growing throughout the year. But if it does drop its leaves, keep it dry until the next Autumn. Water sparingly at all times. Although this species is not considered in immediate danger of extinction, its overall population is fairly small and confined to a small region. Also, its uniqueness makes it very sought after by succulent collectors. For this reason it is protected by law. No plants may be removed from nature, but there are plants currently available in the horticultural trade, that have been grown from seeds. A good part of its natural distribution area is included in conserved areas such as the Richtersveld National Park.


For more information and pictures, you might look at this species' page on PlantZAfrica.