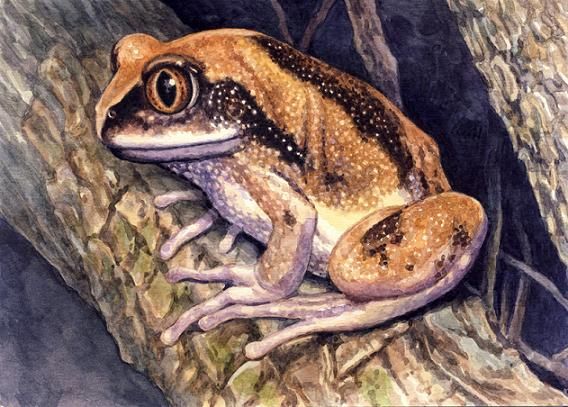 This is a watercolour paining of a Brown-backed Tree Frog, Leptopelis mossambicus. This is a close relative of the Forest Tree Frog. In that entry I mentioned tree frog species having adapted to environments other than forest in Southern Africa … and this is one of them!


In South Africa, true evergreen, closed-canopy forest is very rare, covering less than half a percent of the surface area of the country. Savannah, which is mainly a grassland dotted with widely-spaced trees, is much more extensive. Some savannah areas are more wooded than others, but all are characterized by being open enough for a dense, predominant ground cover of grass. Savannahs also have a very seasonal climate. Summers receive ample rains, while winters are dry, and usually last very long. It is not unusual for savannah regions to experience six to eight months of the year without any rain at all.


Therefore, for an amphibian like a frog, savannahs are a somewhat challenging environment. Frogs have thin, glandular skins that need to be kept moist. Most savannah frogs are associated with water and wetlands. These range from tiny puddles – even the footprint of an elephant filling up with rainwater after a brief shower – to large rivers and lakes. But in savannah regions, most of the water is available only during the rainy season. Seasonal wetlands can be very extensive, such as large marshes and pans, or floodplains where rivers expand beyond their normal banks at times of high rainfall. But all of these dry out completely during the dry season.


So how does a tree frog, evolving from completely arboreal ancestors living in moist forests, adapt to the hot and dry, open savannah? In the case of the Brown-backed Tree Frog, it has developed a semi-terrestrial approach. While the toes of forest tree frogs are long and thin, mostly lacking webbing, but with broad 'sucking-pads' at the tips, the Brown-backed Tree Frog has developed more robust fingers and toes with smaller adhesive pads. But in addition to those it has developed a hard ridge on the heel of the hind foot. This is a development that has evolved separately in a great many different groups of frogs and toads, even though they are not closely related. This is called convergent evolution: because they live in a similar way, their bodies have evolved similar shapes and/or structures. In this case, the ridge on the hind foot is used for digging! It is like a small spade permanently attached to the foot.


So here you have a frog that is both a good climber and a good digger! It is not as good at either of those things as are frogs that are exclusively adapted to either the one or the other, but in this case the 'jack-of-two-trades' approach allow it to exploit a specific niche. During the scorching day, and during most of the long, dry season, the frogs bury themselves in shallow holes, where they are protected from the sun and where the moisture remaining in the soil keeps them from drying out. They use a backwards-shuffle, digging by pushing the soil outward with their rear feet and 'settling' their bodies deeper and deeper into the hole, until they are quite deep and the excavated soil closes the hole up again. During the rainy season, they will come out at night to go a-courtin'. The males will seek out tall trees on or around the banks of large pans, marshes or swamps. Sometimes they will pick trees that are a good distance away from the water itself. They will clamber up as high as they can, and then quack competitively to attract females. This species' call is a double-quack, 'yack-yack', often preceded by a soft buzzing. You can find them fairly easily by following the noise and illuminating them with a flashlight where they sit amidst the twigs.


When the females come, the males will clasp them, and they will descend to the ground. In this species, it seems we don't know exactly what happens next. It is possible that the eggs are buried in the ground, unlike those of the forest tree frog that are laid on the banks of streams, in the shady undergrowth, where they will remain moist enough until the tadpoles hatch and slither down into the water. So we don't know how the tadpoles of brown-backed tree frogs actually get to the water! This illustrates how little we still know about many species on this planet.


This tree frog is fairly widely distributed in Southern Africa. In my country it occurs in hot, low-lying savannah regions from northern Kwazulu-Natal through Swaziland and the Lowveld of Mpumalanga and Limpopo Provinces, through most of Mozambique (its species name refers to this) and parts of Zimbabwe, reaching its northern limit in southern Malawi. It is large for a tree frog, but fairly small for a frog in general, being about 50-60 mm (2" or slightly larger) in length from snout to vent, females being slightly bigger than males. As its name indicates, it is brown above, unlike its mainly green forest cousins, reflecting the drier environment of the savannah. Beneath it is lighter, creamy to pinkish. Most of them have a distinct, horseshoe-like mark on the back, and many have a dark streak through the eye as well. Young frogs are green. Tadpoles are quite large, 60 mm in length, as much as the adult frogs! But they are quite slender of course.


In spite of its wide distribution, this frog is rather poorly known. It is mostly at risk from the destruction and deterioration of wetland regions. It is important scientifically for understanding how species evolve and come to adapt to different habitats. But actually all existing species are scientifically important as every single one of them is unique … a unique solution at living in a certain way at a certain time and place. This tree frog is an 'intermediate' species, caught between the trees and the ground so to speak. There are two other Leptopelis tree frogs in Southern Africa that have also 'come down from the trees' even as our own distant ancestors are hypothesized to have done … and I hope to be illustrating and discussing them soon!