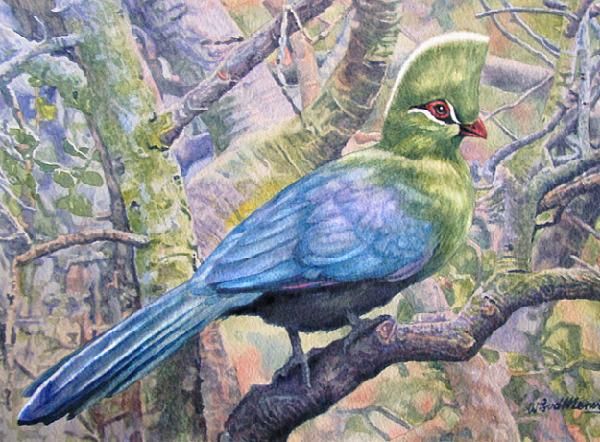 Today's painting is of one of my all–time favourite kinds of bird: the Knysna Lourie (or Turaco), Tauraco corythaix. The scientific genus and common name refers to a West African name for these birds (different but related species), while the species name 'corythaix' means 'with waving plumes on top of a helmet'. This of course refers to its snazzy crest! I have the good fortune to have seen these birds many times . . . and to have heard them many more times! They have a soft, hoarse, cawing call, that is one of the most characteristic sounds of the misty, moist, montane and temperate forests of South Africa, adding to their atmosphere.


But seeing a Knysna Turaco is even better! These birds have a soft, delicate elegance to them. I tend to think of them all as being feminine . . . but there is actually no visible difference between the sexes. All of them have the soft, neat plumage and 'make–up' in their faces: a red rim around the eyes, with black and white lines above and beneath it. They also have bright red bills, and white–tipped crests. Their heads, necks and chests are green, and they have blackish bellies, and glossy blue and purplish feathers on their wings and tail.


But this already beautiful plumage hides something even more striking! Under the cover feathers of their wings, turacos are hiding bright crimson–red flight feathers. These are seen whenever a turaco takes flight. The flash of crimson is almost dazzling, and might have a protective value: a predator might be startled to see the red when his intended prey takes flight – only for it to disappear again when the turaco lands. For a hiker in the forest, the sight of a turaco flying overhead through a patch of sunlight, lighting up the red wings so they seem to be glowing with an inner radiance, is unforgettable.


Unfortunately turacos don't fly a lot. Most of the time they're running, clambering and hopping amongst the branches of tall trees. They can be surprisingly difficult to see amidst the green foliage. But at least in the forests here in my region they are not particularly timid, and will sometimes allow you to approach them close enough for a good view. And in this case it pays to try to get even closer: when inevitably you do scare the bird away, you're treated to its wonderful flying plumage display!


Knysna turacos (as currently understood) only occur in South Africa. They live in tall, moist forests from the George/Knysna/Humansdorp region in the Western Cape, through the Eastern Cape and Kwazulu–Natal, through Mpumalanga and into Limpopo in the forests of the Woodbush region, which is close to where I live. They like cooler forests, so in the more northern regions they prefer the mountain forests, but in the very South they occur at sea level. But in the north of Kwazulu–Natal a related species, Livingstone's Turaco, Tauraco livingstonii, does occur at sea level. Once this was considered to be the same species, but this population – which occurs northward from there into Mozambique and Zimbabwe – is now considered to be distinct. It looks much like the Knysna Turaco but has a longer crest. Another definitely separate species that occurs more widely here is the Purplecrested Turaco, Turaco porphyreolophus. I have paintings of this one too – including of it in flight, showing the red wing feathers – which I hope to soon share here.


The turacos constitute a distinctly African group of birds, separate enough from others to warrant their own family, or perhaps even an order. The number of turaco species depend on details of how the Knysna (and related) turaco complex is classified: they could be seen as a single variable species, or as several somewhat similar but nevertheless distinct species. This gives the genus Turaco anything between ten and fourteen species. Then there are three species of Go–Away Bird, two species of Musophaga–turacos, two species of Crinifer plantain–eaters, the Ruwenzori Turaco, and the Great Blue Turaco. Most species live in forests, but some venture into open woodland or savannah. All are fruit eaters, but most will also eat leaves as well as a few insects they manage to catch. The forest dwellers are typically the more brightly coloured . . . the Go–Away Birds and the Plantain Eaters are mostly grey or brownish.


As for the more brightly coloured turacos . . . they turn out to have unique pigments in their feathers. In most birds, coloration comes from melanin and lipochrome, or from the microscopic structure of the feathers themselves, causing diffraction of light that strikes them, producing colours of certain wavelengths. But in turacos the green and red of their plumage is the result of actual chemical pigments that occur nowhere else in the animal kingdom. The better–known one is responsible for the bright crimson in their wings. It is a copper–based pigment called turacin. This is only found in the Turaco, Musophaga and Gallirex–genera. But the other pigment is the green pigment in their body feathers, called turacoverdin, and all turacos have these, even the grey ones. . . in their case it is 'masked' by other plumage factors.


Athough turacos currently are found in the wild only in Africa, there are signs they might have evolved in Europe first of all. Several fossils from Europe have been assigned to the family, but their identity is not quite clear yet. But there are also fossils from North Africa (where they no longer occur either) that seem to be turacos. In either case, they would have made a significant movement southward, to land in tropical Africa.


It is also not quite clear to which birds turacos are related more closely. Currently they are classified in the Cuculiformes, the Cuckoo order, but they also show affinities to the order of pheasants, partridges, chickens and their relatives, the Galliformes. Sometimes they are put in an order all of their own, the Musophagiformes. I hope to show you a few more members of this group soon.


Lastly it seems that turacos make delightful pets. I am always a bit skeptical about the very idea of keeping animals as pets – unless they've been thoroughly domesticated like cats and dogs. But for what it is worth, turacos can become very tame and are also playful, not to mention being beautiful and having wonderfully soft feathers. They also can be seen in many zoos and aviaries. In captivity they are long living, typically surviving for thirty years or more. I guess that captive breeding might help with perpetuating some of the rarer kinds like the lovely Angolan Red Crested Turaco. But there are other species that are severely threatened, like Bannerman's Turaco and Ruspoli's Turaco. The Knysna Turaco is, fortunately, quite safe at the moment, being widely distributed and most of the remaining native forests in South Africa being protected.