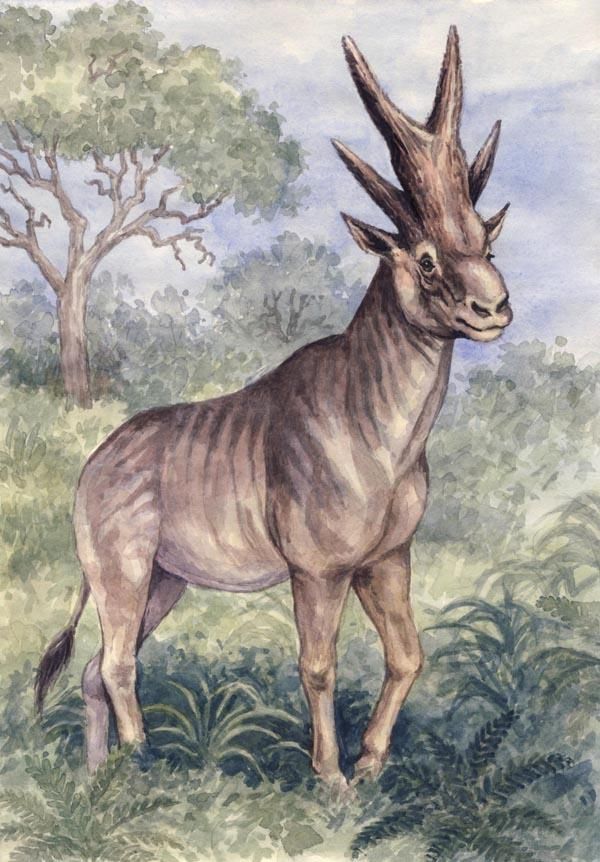 
Now we come to the second part: ancient giraffes! Since I find giraffes so interesting, I've done a lot of reading about their evolutionary history. I've also drawn and painted a few pictures of some of the ancient forms; here are three. The first is a Bramatherium, which occurred in India; the next is a Sivatherium, which had different species living in India, Europe and Africa; the last is a Shansitherium, which occurred as far as Eastern China.


It turns out giraffes actually evolved in South–central Europe first of all. They are relatives of deer and also of pronghorn antelopes which were and still are exclusively American. The very first giraffes were fairly small and deer–like. Climacoceras from Africa might have been closely related to the first giraffe ancestors. This genus had well–developed, branched antlers. The method of formation of these probably differed from the antlers of deer, though. Primarily the difference is that giraffe horns or antlers, properly called ossicones, are never shed, and are usually covered in skin, which in old animals may rub off the tips. Other very early giraffes, probably closer to the true giraffe ancestry, were animals like Georgiomeryx, Canthumeryx and Injanatherium. They looked like long–legged antelopes with sidewards–projecting ossicones over the eyes, sometimes with a thickened boss of bone over the forehead.


Giraffes rapidly increased in size, and also diversity. Most of them remained in Europe while some spread to Asia, and only a couple to Africa. At one stage there were eight different species of giraffe occurring on just the island of Samos in Greece! One of these, Samotherium, is named after the island. It had a short neck and a single pair of ossicones over the eyes. In some species these were short and straight, but in others longer and curved towards the rear. This genus is still poorly known and studies seem to indicate it should be split into different genera. The genus Shansitherium (see picture) which spread to Asia is similar, but in some of its species the ossicones diverged above the eye so that it seemed as if they were four–horned. Other giraffes with fairly simple ossicones included Palaeotragus and Birgerbohlinia. 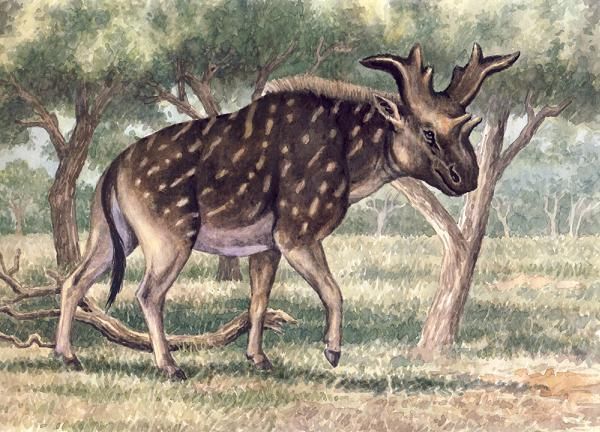 In a number of ancient giraffes the horns, or ossicones, became much more highly developed. These are sadly all extinct today. Giraffokeryx had four long horns: a pair on the middle of the muzzle, and another pair over the eyes. Bramatherium from Asia (see picture) had the front pair of ossicones fused together for their lower half, only diverging into a Y–shape at the tips. It had a second pair of separate ossicones behind the eyes as well. Sivatherium had the most elaborate ossicones of all: the first pair in front of the eyes were short and straight, but the pair behind them were broad and flattened like the antlers of a moose. Sivatherium giganteum, the species I illustrated, lived in Asia, but other species of Sivatherium occurred in Africa and Europe as well. A related species, Helladotherium, lived in Greece. Only a female specimen is known, which was without ossicones, so we don't know what those of the male looked like. Sivatherium was the largest known giraffe ever, probably exceeding two tons in weight. But it was a short–necked, stout–limbed and ox–like species, and would not have been nearly as tall as the modern giraffe. A sivathere, or a close relative of them, used to occur abundantly in the Langebaanweg region of the Western Cape of South Africa, about five million years ago. Thousands of fossils of them have been found.


Most of the ancient giraffes that we know of were relatively short–necked. However, long necks seem to have evolved more than once. Bohlinia attica from Greece had a neck almost as long as that of a modern giraffe. Honanotherium of China was also fairly long–necked, and had a pair of long, stout, widely–spaced ossicones over its eyes. Lastly the genus Giraffa itself, to which modern giraffes belong, became long–necked and had a few extinct species, of which Giraffe jumae might even have been larger and taller than the modern one.


Lastly, ancient giraffes were more diverse in styles of feeding than the modern ones. Those that were fairly tall and slender–limbed were probably browsers. The early antelope–sized species might even have fed in the way used by the modern Gerenuk antelope of East Africa: standing upright on the hind legs, and using the long neck as well as the long forelimbs to get at the high–growing leaves. Of course the large and long–necked giraffes are the highest feeders of all. Most others were in–between feeders, but a few were probably low feeders, such as the stout and short–limbed sivatheres and bramatheres. They might have been mixed feeders, browsing the leaves of shrubs and trees as well as grazing. A few species might have been predominantly grazers.


The fossil record therefore shows that the surviving giraffes, as well as the Okapi, are the last remnants of an assemblage of animals that used to be very diverse and widespread in the past. This is a story that is the same for a great many other contemporary mammal species. If we don't know the fossil record and evolutionary history of our surviving living species, we cannot have an adequate grasp of the concept of biodiversity, nor can we have a good idea of the potential and richness that is inherent in evolution. We also will have difficulty appreciating just what a diversity of lifeforms our planet can actually sustain. We are living in a time in which the diversity and abundance of large mammals is a shadow of what it used to be in the past. The climate instability of the Ice Ages, as well as our own primitive forebears, have already caused a large–scale eradication of species prior to the recorded history of 'modern man'; if we are not very careful, now with global warming and ongoing habitat destruction, we might lose many more. 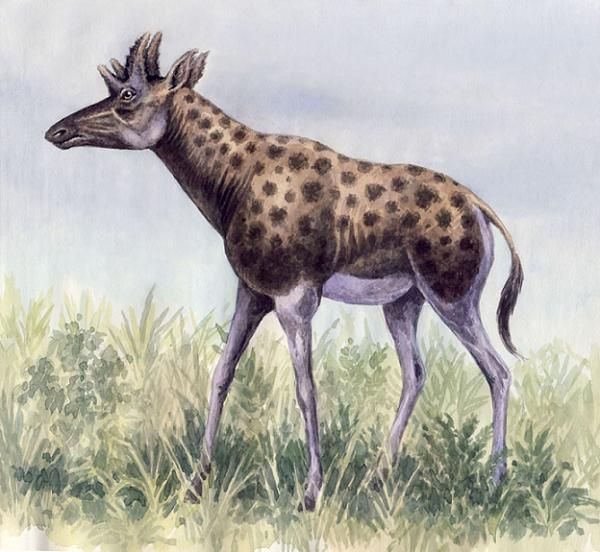 Also, despite all the prehistoric giraffes known, it is still not exactly clear exactly how they evolved. There is a dearth of intermediate forms showing how the long necks of modern giraffes evolved from species with shorter necks. Personally I also really would like to know just how the giraffe acquired its distinctive coat pattern. Did it evolve out of a deer–like pattern of light spots on a dark ground, with the spots amalgamating into lines, or did it evolve from dark spots on a light ground, the spots enlarging and elaborating? Where there striped patterns involved as well? The living Okapi has a pattern of dark and light stripes on the legs, very different from the coloration of giraffes. What other patterns might the ancient species have had? In my illustrations I imagine some of the possibilities. And speaking of the Okapi, while it seems similar to many of the other short–necked, simple–horned extinct giraffes, it is not clear exactly which one it might be descended from. Also it might turn out to be quite different from them though being superficially similar. . . it has its own unique features in the skull and horns. In short, there is still a great deal that we don't know about these unique and fascinating animals.