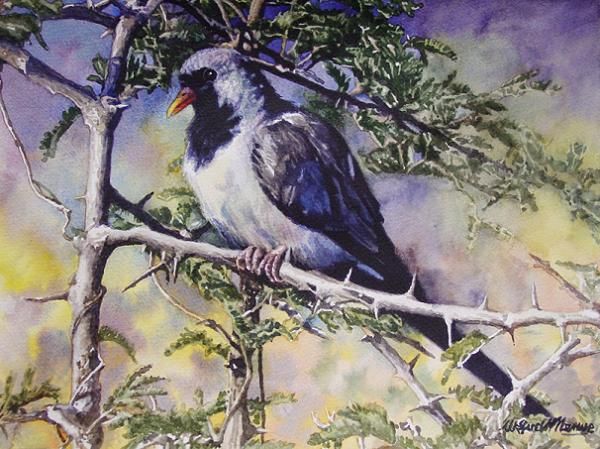 This time our picture is a Namaqua Dove, Oena capensis. The scientific name 'Oena' comes from the Greek 'oenas' which means a wild pigeon the colour of a ripening grape – in other words not a very appropriate name. The species name 'capensis' of course denotes the Cape, where this species was seen first.


This is the smallest, and perhaps also the prettiest, of all the pigeons and doves in South Africa. Although its long tail makes it longer than the other small doves, the Tambourine, Green-spotted and Blue-spotted Wood Doves, its body is smaller and it is the lightest in weight. It is comparable in shape and size to the popular pet parrot the Budgerigar, or Budgie.


I am familiar with these doves as they are not uncommon in the region where I live. They are never abundant like the turtle doves or the laughing dove though, and don’t come readily into town, preferring the wilder surrounding regions. They are also very quiet and unobtrusive. Their calls consist of a variety of soft coos, but are rarely heard. Many times you only glimpse them as they fly off low and fast after you’ve stumbled upon them – but you recognize them by the long tails, and also the bright reddish-brown flight feathers of the wingtips.


If you can get a good view of them, you can appreciate their delicate beauty. The male alone has the black face mask and the yellow-tipped red bill, but both sexes have the long, narrow, pointed tail. Females and males can often be seen together. Sometimes they form small, loose flocks; at drinking sites in dry regions you might be fortunate to see large numbers of them.


'Namaqua' is a name referring to a region and a people. When the Dutch landed in the Cape, many of the indigenous Khoi people, to avoid conflict with them, moved up northward into the arid and rather inhospitable northwest corner of the country, and became known as the Namaqua, with the country itself called Namaqualand. The people living there today are still the ones with perhaps the 'purest' Khoi genes (this people has generally blended in with the other peoples and so no longer survives as a distinct, pure ethnic type). But they no longer speak their original languages, most today speaking a form of Afrikaans, although with very interesting local words and phrases.


The Namaqua Dove, though, is by no means restricted to this region. It is associated with similarly dry areas over most of its distribution, but also occurs in wetter habitats, such as grassland or open woodland, as long as the vegetation is not too lush. It lives on the ground a lot, walking slowly and leisurely over open patches of soil or in very short grass. Here it pecks up small seeds of grasses or weedy herbs such as amaranth. Where the grass is longer and thicker it will use man–made open patches such as the edges of roads, or footpaths, old farmlands, or gardens and farmyards in rural areas. Similarly it will use areas where large mammals have reduced the grass cover by grazing and trampling, or where recent fires have burnt down the grass. It avoids places densely populated with humans. It doesn't seem to like bustle.


Apart from South Africa, Namaqua Doves live in the rest of sub-Saharan Africa except for the more densely vegetated regions. It also occurs on Madagascar, and extends into southern Arabia and southwest Asia as far as Turkey.


Namaqua doves are currently placed in a genus all their own. Their closest relatives are the previously mentioned wood doves that occur in well developed savannah, woods and forests in Africa. Like the wood doves, they are small in body, have iridescent spots on their wings, and chestnut or reddish brown flight feathers. They have also a very similar head and bill shape, some wood doves' bills also being red and yellow. But unlike the wood doves, they have lengthened tails, and are strongly sexually dimorphic – the males looking very different from the females. The black face and breast patch of the male Namaqua Dove is also a unique feature. Lastly, the call differs from those of the wood doves: all of those have coos consisting of several repeated, strong hoots, often descending the scale. These coos are very characteristic of woodland regions in Africa, while the Namaqua Dove's soft cooing is very rarely heard at all.


There is much we still don't know about these doves. In particular, they have unusual migratory habits. They do not move around every year on fixed routes, like swallows, to and from specific breeding grounds. Their movements are more local and not according to fixed patterns. They do not even seem to be responding to for instance rains: sometimes they'll move into a particular region after it has received good rains, but other times they'll leave an area after it has received above average rainfall. In the same way, its population numbers in any region may fluctuate wildly, many being seen in some years, none in others. Overall, the population of this species seems to be stable and it is not considered to be threatened.