Bluebottle has been commemorating the 70th anniversary of the worst air raid the Isle of Wight faced during the Second World War by waving a Polish flag. Has he gone mad?

The story began in 1935, when the Polish Navy wished to order two of a new class of advanced destroyer. After fierce international competition for such a lucrative contract, Isle of Wight shipbuilders J Samuel White & Co were chosen to build the vessels. J Samuel White & Co was one of the Island's largest maritime companies with a reputation for building high-quality, exceptionally fast warships. First established in 1764, they built ships, especially warships, since 1802, and were based in Cowes since 1814, before closing in the 1960s. They also had a successful aircraft division during the Great War. They specialised in making fast vessels and, when completed, the two Grom-class vessels, ORP Grom (Translated: Thunder) and ORP Błyskawica (Translated: Lightning. Błyskawica is pronounced 'Bwi-ska-veet-za') were the fastest destroyers afloat. They were 114 metres long, weighed 2,782 tons and capable of speeds in excess of 41 knots. 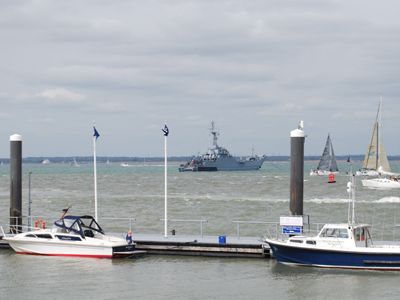 On 1 September, 1939, Germany invaded Poland. Consequently, following the the Polish-British Common Defense Pact, two days later Britain declared war on Germany. During the Second World War Poland and Britain were allies, and before the war started, on 30 August 1939, Operation Peking, in which the destroyers Grom, Błyskawica and Burza (Translated: 'Storm') were escorted past the Kriegsmarine to Britain to save them from destruction. On 7 September 1939 the Błyskawica attacked a U-Boat, the first recorded combat between an Allied and German ship in the war.

During the war the two Grom-class vessels fought with distinction, with the Błyskawica, under the command of Captain Francki, escorting the Queen Mary to Britain carrying American troops through the dangerous Atlantic, the hunting-ground of U-Boats. The Błyskawica was one of the few ships capable of keeping up with the record-breaking Blue Riband winning liner.

Sadly her sistership, ORP Grom, was sunk off Norway in 1940, however Błyskawica remained in service, frequently engaging both enemy U-Boats and aircraft, until spring 1942 when she returned to Cowes for a refit.

During the Second World War Cowes and East Cowes manufactured aircraft, including flying boats3, radar equipment as well as warships4, plywood5 and other shipyards built other vessels including landing craft and motor torpedo boats (MTBs). The nearest purpose-built anti-aircraft batteries constructed to defend against the Luftwaffe in early 1940 were located at Whippingham, manned by 120 men of the 57th Heavy AA Regiment's 213th Anti Aircraft Battery, and four 3.7 inch guns at Rew Street, Gurnard. In addition there were two searchlight positions nearby, at Cowes, manned by 38 men, and Gunville, manned by 30 men, both in 392 Battery of 48 Searchlight Regiment Royal Artillery, armed with Lewis machine guns and rifles. Although these defended Cowes and East Cowes from attacks from the south and west, the approach to the two towns from the north over the Solent was vulnerable.

On 28 April, 1942, six German aircraft attacked Cowes and ORP Błyskawica, almost sinking the ship and destroying the jetty leading to the destroyer's gangway. Among the aircraft was a photo reconnaissance aeroplane, which Francki believed would be a precursor to a major attack. Although his ship was undergoing a refit, with its weapons temporarily decommissioned and many of his crew on leave, Francki applied to the Admiralty for permission to re-arm. Despite his request being rejected, Francki ordered more munitions from Portsmouth.

Six days later, on the night of 4 May, 1940 at 11pm 160 Dornier Do 217 bombers attacked Cowes and East Cowes. They dropped parachute flares to light the town and came in from the Solent at sea-level, below the aim of the few land-based anti-aircraft guns. Defending the towns were Six Free French Chasseurs6 armed with small-calibre weapons, and the ORP Błyskawica. The destroyer left her moorings, headed directly at the attacking wave of aircraft, dropped anchor across the entrance to the river Medina and fired all its anti-aircraft weapons, forcing the bombers higher, reducing the accuracy of the bombing. The anti-aircraft gun barrels fired continuously and grew so hot that the Polish crew was forced to continuously throw seawater raised in buckets from the sea over the barrels to cool them down enough to keep firing, while a smaller boat was dispatched to Portsmouth to bring over more ammunition.

A second wave of planes attacked at 3:45am on the morning of 5th May, and once again the Błyskawica defended the towns until dawn. Although the bombers dropped over 200 tons of high-explosive bombs and thousands of incendiary bombs, killing 837. If it had not been for the Błyskawica, the destruction would have been far, far worse. Local resident Raymond Tarrant remembers,

'The only thing that really saved the town was that Polish destroyer in the harbour. I dread to think what might have happened had she not been there.'

This did not stop Italian newspapers soon after publishing propaganda photographs claiming the 'industrial centre of Britain has been destroyed'(!)

Two months later, Captain Francki received a despatch from the Commander-in-Chief at Portsmouth, Sir William James, congratulating Francki and his crew for 'the good work done [and]... an expression of their Lordship's appreciation of their good service'. He described the lack of significant damage to Cowes as 'a minor miracle'.

Several members of the Błyskawica crew later settled in the town after the war, marrying local girls.

The defence of Cowes and East Cowes has regularly been commemorated. In 1982 the 40th anniversary was celebrated with many of the original crew returning for a commemorative event. In 1992, shortly after the final liberation of Poland and the fall of Communism in 1989/90, to celebrate the 50th Anniversary two Polish vessels, the ORP Kaszub and ORP Wodnik, visited Cowes to mark the occasion. Five years later The Friends of ORP Błyskawica Society was formed and in 2004 Cowes erected a plaque and named a square 'Francki Place' in honour of the captain which was unveiled by Captain Francki's daughter, Nina Doroszkowska.

The Błyskawica itself was invited to return to Cowes, with Isle of Wight Council Leader announcing in 2007,

'2012, as well as being the year of the London Olympics, is also the 70th anniversary of the defence of Cowes by the Błyskawica and the 75th anniversary of the commissioning of the ship. I raised the suggestion during our visit to Gydinia of how wonderful it would be if she could be brought over to Cowes during that year and, while this gained a deal of approval, the cost and the logistics of such a move should not be underestimated. The Cowes harbourmaster has welcomed it and suggested a mooring on the new Parade Landing right in the heart of Cowes.'

Sadly that was not to be, however to mark the occasion, Bronislaw Komorowski, the President of the Republic of Poland said,

'I want to address the residents of [the] Isle of Wight and give credit for their contribution in keeping alive the memory of the Polish destroyer ORP Błyskawica in its defence of Cowes against the Third Reich air force. It forms a very symbolic event in Polish-British relationships.

While Polish territory was occupied by Nazi Germany and Soviet Russia, our destroyer found a new home in the British Isles and during those days in May she was in the very same shipyard where she was built. It was just seven years earlier that she left Cowes to serve under the white and red Polish ensign and then to come back to defend the people of the Isle of Wight.

I offer my sincere greetings to all of you who are gathered to commemorate the 70th Anniversary of the defence of Cowes on the Isle of Wight… [The] Isle of Wight will remain forever a symbol of Polish-British friendship and a symbol of freedom and democracy over totalitarianism and aggression.'

The Cowes-built ORP Błyskawica is still afloat today, the world's oldest surviving destroyer. She is a museum ship in Gdynia dockyard near Gdansk. Błyskawica is the only vessel to receive Poland's highest military honour, the Gold Cross of the Virtuti Militari Order, awarded on the 50th Anniversary of its entering the Polish Navy's service.

1Okret Rzeczypospolitej Polskiej, translated: Ship of the Polish Republic2'Roads' is a naval term for an area, usually outside a harbour, that is safe for ships to lie at anchor and is sheltered from the weather.3Saunders-Roe constructed 454 Walrus flying boats, 417 Sea Otters and developed the SRA1, the world's first jet-powered flying boat.4Twenty-eight warships would be built at Whites during the war, including five escort vessels, a patrol vessel, minelayer, gunboat and tank landing craft. Most vessels, 18, were destroyers. One destroyer, HMS Cavalier, would be the fastest ship in the Royal Navy until she was decommissioned in 1971 and is now in Chatham Historic Dockyard. Another, HMS Contest was the world's first all-welded destroyer. Curiously destroyer HMS Eggesford would later be sold to the Federal German Navy and renamed Bronmy, serving the country she was build to defend against between 1957-1965.5Forty percent of Britain's wartime plywood for the aircraft industry came from Saro Laminated Wood Products in Whippingham, a village on the outskirts of East Cowes.6French naval equivalent of MTBs (motor torpedo boats) designed to protect convoys.7In total 214 were killed in air raids on the Isle of Wight during the Second World War, 92 men, 90 women and 32 children.