Are you a geography whiz? How did you do with our quiz question? 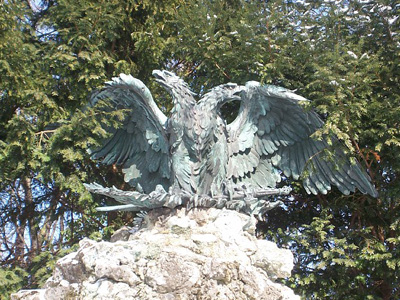 Part 1: the answer is (4). The double-headed eagle was a symbol of the Austro-Hungarian Empire. Tavaron, our expert on all things Austrian, has the answer to the essay part here:

The double-headed eagle was the symbol of the Holy Roman Empire, from the 15th Century. After the end of the Holy Roman Empire Franz II / I 1 adopted the double-headed Eagle as symbol for the Austrian monarchy in the early 19th Century. In the late 19th Century an altered version of the double-headed Eagle became the symbol of the union of Austria and Hungary. It had the coat of arms of the house of Habsburg-Lothringen on its chest (in later days only the red and white coat of arms of the house of Babenberg, the first monarchs of Austria in the 13th Century), a sword and a globus cruciger in its claws and the crown of the empire above both heads. The double-eagle stayed the symbol of the Austrian empire until its end in 1918. It was again used in a different version between 1924 and 1938.

Today the eagle has lost one of its heads and again just shows a shield with Austria's national colors of red and white. It holds a hammer and a sickle in its claws and wears broken iron chains. On its head is a mural crown.

This particular double-eagle statue was put up in 1908 for the 60-years anniversary of the coronation of emperor Franz Joseph I (he dies in 1916). It stands in a park that belongs to the Austrian army (but is used a lot by ordinary people, especially people with dogs). The small forest and fields of the 'park' are the grounds (over 1 km²) of the first military academy of the world, founded in 1751 by Empress Maria Theresia. Here army officers are trained until today, gaining the grade of a Bachelor. The main building of the academy is a castle that was first built in the 13th Century, after the first castle of the city got too small. Legends tell that the money for the first castle came from the ransom of Richard Lionheart. The chapel of today's castle contains the grave of emperor Maximilian I. It was attacked in the first Turkish Siege in the 16th Century and almost completely destroyed in WWII, but rebuilt later.

1II of the Holy Roman Empire and I of Austria