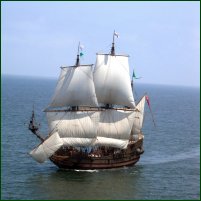 Probably the most famous shipwreck in the waters around the Isle of Wight is that of the Mary Rose.

Work on building the Mary Rose began in 1509, and she was launched in 1511. Named after Henry VIII's sister, she was a large ship, over 100 feet long and 36 feet wide. In 1513, the Lord High Admiral Sir Edward Howard called her "the flower of all ships that ever sailed."

She first saw action in the French War of 1512-1514. France was planning to conquer Italy, and so England and Spain allied against her to prevent this. In August 1512 she was part of a fleet of 25 English warships that engaged a combined French-Breton fleet near Brest, engaging the French flagship Le Grand Luise. The English Fleet under Lord Admiral Sir Edward Howard gained control of the Channel. She also fought in the French War of 1522-1525.

Her design meant that she was initially a very seaworthy, and extremely manoeuvrable, vessel, and the Henri Grace a Dieu, commonly known as the Great Harry, was based on her design. Revolutionary developments in Naval design were incorporated; the Mary Rose was the first ship known to have been designed to carry cannon on a gun deck above the orlop1 deck.

Gunports had been developed between 1505 and 1509, and the Mary Rose had been designed to have gunports from the beginning of her construction. They were cut into her side allowing cannon to be placed on the main deck. This meant that the guns could now inflict damage on enemy ships, whereas before, guns had at most been used against those onboard vessels, or to damage rigging.

In 1522 she carried a complement of 426, 244 mariners, 125 soldiers and archers, 30 gunners and 25 trumpeters and servants. In 1536 the Mary Rose was rebuilt in Portsmouth, with the Mary Rose being increased in size from 600 to 700 tons. She now carried 15 bronze cannon, 57 iron cannon and 70 anti-personnel guns, with her lower gun ports only 16 inches above the waterline.

Although she was one of the first vessels able to fight with the new tactics of using cannon to sink a ship, she retained her medieval castle. Tactics remained to run her prow over an enemy's vessel and then kill all onboard the enemy ship with arrows and early guns before boarding.

When Henry VIII broke from the Catholic Church, the Pope ordered France and Spain to invade England. In 1539, it was threatened that England would be invaded by French, Spanish and Scottish forces.

Henry VIII quickly built a string of castles around the country to defend Britain from attack, and married Anne of Cleves in an attempt to gain allies in Germany. France and Spain, however, were old enemies, and were at war with each other in 1542. Also in 1542, the Scots invaded England, but were defeated at Solway Moss. In 1543, Scotland was attacked in turn; raids in 1544 led by Edward Seymour, Earl of Hertford, by the Navy Royal, resulting in the capture of two of Scotland's galleasses.

Also in 1544, allied with Emperor Charles V of Spain, Henry VIII declared war on France. His 40,000 men quickly captured Boulogne, yet Charles V had negotiated a truce with King Francis I of France, leaving England fighting against France on her own.

On the 3rd January 1545, Francis I announced his intention to invade England "to liberate the English from the Protestant tyranny that Henry VIII had imposed on them."

Francis I gathered a large fleet, 150 battleships, 60 decked pinnaces and 25 galleys, 235 in total, under the command of Admiral Claude d'Annebault. In June, Henry VIII attempted to attack the French fleet before it set sail, and sent his Navy to Le Havre, where the English fleet was chased out of the mouth of the Seine without inflicting any damage on the French fleet.

The English fleet gathered in Portsmouth - 40 large warships, and about one hundred requisitioned merchantmen.

On the 15th July, Henry and his Privy Council moved to Portsmouth to await the invading army. Henry had only the small, part-time, local militias, the Isle of Wight militia, for example, barely contained 2,000 men, and a few mercenaries to fight France's 30,000 men, including over 10,000 professional soldiers.

The French fleet, however, had also had its share of problems. On the 6th July, d'Annebault held a state dinner aboard his flagship, the 800-ton Carraquon. During the meal, the cook accidentally set fire to the vessel; the fire quickly catching the stores of gunpowder aboard, which promptly exploded. d'Anebault was one of the few survivors. He transferred his flag to another ship, the La Maitresse, which ran aground when leaving Le Havre. Despite this, d'Annebault continued in the damaged ship, which later sank outside Bembridge.

The Battle Of Spithead

The French Armada dropped anchor off St. Helens on the 18th July, and on the 19th, with Henry VIII watching from Southsea Castle, began their attack. The 25 galleys, each with a single, massive cannon in the bow which was aimed by turning the ship to face the enemy, moved in on the English fleet secure in Portsmouth Harbour. In reply, the Great Harry and Mary Rose led the fleet to attack the galleys, whose main target was the Great Harry. They did little harm, and were soon chased off by English rowbarges.

The novelty and lack of experience with cannon was apparent when the English fleet moved to attack the French. Sir Dudley, the Lord Admiral, had drawn the fleet up in line abreast, the traditional, medieval, approach to sea battle. In line abreast, only a few cannon were pointing at the enemy, most pointing at other English ships. If the fleet had been drawn in line astern, the ships would have been able to bring about their full broadsides to destroy the enemy.

The Mary Rose, which had over 700 men onboard, fired a broadside, and began to come about to bring her other broadside to bear. During this manoeuvre, by an overwhelming oversight, the gun ports nearest the waterline were kept open. A gust of wind at the wrong moment tilted the Mary Rose too far, and water started seeping in. The ship soon sunk in front of the King, who cried, "Oh my gentlemen! My gallant men! Drowned like rattens, drowned like rattens!" with only 40 of the 700 onboard surviving.

D'Annebault had failed to lure the English fleet out of the protected waters of Portsmouth, and later landed troops on the Island at Bonchurch, Seaview and Sandown, with many of his men, against his orders, also attacking Whitecliff Bay. The invasion failed, and after even the sight of much of the Island ablaze did not enrage Henry enough to attack the superior French force, the French fleet withdrew on the 28th July. The French fleet was later defeated off Shoreham, and in 1546, peace was made with France.

The Mary Rose was raised in 1982, and is on display at Portsmouth Dockyard, alongside HMS Victory and HMS Warrior.

Following the loss of the Mary Rose, ships continued to advance in design, and trade boomed. With important ports like Southampton and Portsmouth nearby, the waters of the Island continued to receive a large number of wrecks.

Shipwrecks Of The Isle Of Wight

1The lowest deck in a ship with 3 or more decks