Sunday morning found us all packed once again for the next change of hotel.

Today's planned visit was Bergama, probably better known as Pergamon. However, first we were brought to a carpet outlet. We were welcomed by the owner of this outlet, in perfect German. I don't recall where in Germany he grew

up. We were given a short tour through a couple of rooms, one where four girls sat and knotted carpets, and the

next room had a barrel with silk moth cocoons in it, and a girl working the spindle to get silk threads. All the

while we were given explanations about carpet manufacture.

After we had had a go at knotting a carpet and had got a cocoon as souvenir, we were then led into the show

room where we were served with apple tea, Turkish coffee and/or Rake. The owner went on a bit about the high

quality of the carpets, how you can tell a hand-knotted one from a machine-made carpet, the good his factory does

for the people working there, the support from government they get for the good work they're doing (they don't pay

Then the show started. Lots of young men came running in, each unrolling a carpet before our eyes. We were

asked to relax, to get off our shoes and walk over the carpets. After a while of awwing over the very beautiful

carpets we had been shown, and after having been told how easy it was to buy a carpet there, and that they'd take

your old carpet back at delivery of the new one (and some more info), we were split into groups and led into

different rooms where one vendour tried to sell us a carpet. I couldn't help it, but I thought they must be the

Ferengi1 of the East.

The vendor was nice (well, it is his business, after all), and the whole sale-talk took ages. We didn't

buy a carpet. For one, our tastes (re: colours and designs) are completely different. Secondly, we wouldn't know

where to put one, and third, we didn't want to buy one. I guess the poor guy who was supposed to sell us a carpet

went home without his commission. 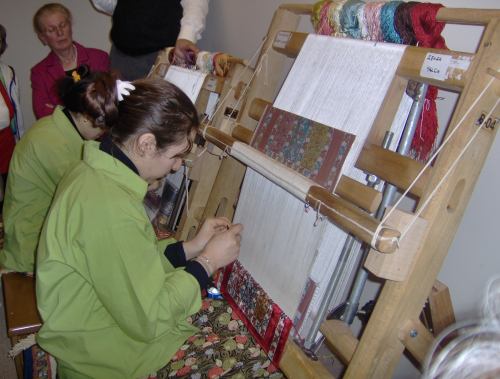 Afterwards we went for lunch in Bergama, and then we went to Bergama itself. It is on a mountain top (or was it

a hill?), and we had to take the chairlift to get up there. The weather wasn't too nice; although it wasn't cold,

there was a permanent fine drizzle, and all was grey in grey.

Well, many pieces of Pergamon aren't in situ. They are at the Pergamon museum in Berlin. Some have been stolen, others have been given to Germany by the Turkish Government.

We walked around for about two hours, saw the things that are still there, then had a tea at one of the many stalls downhill, near the entrance.

After everybody had returned at the appointed time, we embarked on the last stretch to Kusadasi to the third (and last) hotel. This one was very large. It had shops, a hairdresser, swimming pool, Turkish bath, sauna and what have you. Our room was spacious and very nice, the en-suite bathroom was spacious, too. Dinner was very nice, lots of delicious things, and the beer was even cheaper than in the hotel we'd been in before. It had been another great day, but the highlight for many was still to follow: Ephesus.

1For those among you who don't know Star Trek: the Ferengi are a trading people, and they're very clever and successful at that.