The authors are responding to the Post Writing Challenge of advertising the un-advertisable. As usual, they paid no attention to the instructions. (So what else is new?)

As usual, the results are gratifying. Rules be darned.

As usual, we repeat the instructions – not because anybody pays attention to them – but just as a general reference. 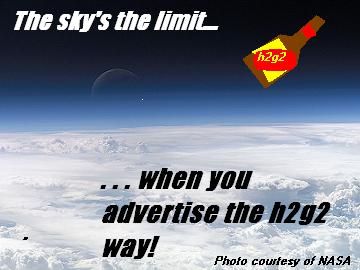 Write, compose, draw or even film an ad. But – and here's the kicker – it has to be something you can't BUY. Something intangible but necessary, such as peace, math ability, or a decent sense of humour. You may OFFER TO SELL this commodity, but only in an impractical way. Take your payment in smileys, hugs, or guru sweat-equity, whatever.

Willem, h2g2's serious artist, has come up with a doozy here. It's fabulous, we'll all want one. In fact, we can't imagine that nobody has thought of it before. Oh, yeah, there was that boring movie I fell asleep in, the one with the velociraptors, but this idea is so much better…

One other note: Willem, I thought I was the champion conspiracy theorist on this site. I was wrong. My tinfoil hat is off to you, buddy. This is majorly wonderful, as the kids say. – DG 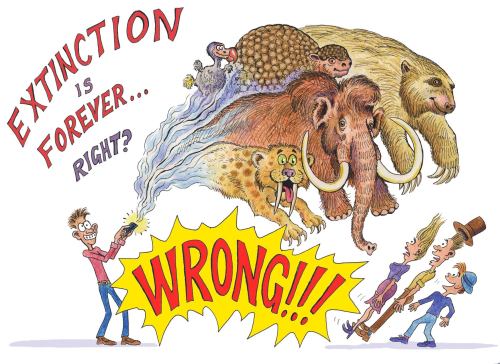 Because now, with the Apogee Extinct Species Restorer, you can, with the simple click of a button, restore any of five thousand extinct species of mammals, birds and reptiles – putting them anywhere YOU want them! Populate your local park with giant ground sloths! Thrill the neighbourhood kids with woolly mammoth rides! Or – for the adrenaline junkies – how about unleashing sabre-toothed tigers on the patrons of the local shopping mall? Fun and games for all – the sky is the limit!

How does it all work?

This technology started some decades ago with secret military research towards producing superior, genetically-enhanced soldiers. It seemed a good idea at the time. But then Osama bin Laden was assassinated, bringing the fear that war and terrorism might soon be a thing of the past – a crisis for us of the military-industrial complex. But of course, 'crisis' simply means 'dangerous opportunity' in Chinese, or so they say anyways – heck, we don't know, we don't speak Chinese. But anyways, Chinese or not, it was dangerous but it was also an opportunity. So, it was decided to make the fruits of our research available to the public, and Apogee Genetic-Mucking-About Solutions was founded. The extinct-species-restorer is merely the first of a whole line of products that we will introduce.

Now, seeing as with the end of war, the next great challenge of humanity is going to be dealing with environmental destruction – of which the worst aspect is the global extinction crisis – our far-sighted and visionary scientists came up with the idea of restoring extinct species. After all, we already have their genes (and yours too, by the way – and we've patented it already, thank you very much!) in our genetic banks. The extinct genomes were put together piece by piece from blood sucked by mosquitoes that were trapped in amber on trees that fell into tar pits and were preserved, until we mined the tar for making extra-carcinogenic tobacco products and junk food (another of our new lines to look out for – contributing to the solution of the human overpopulation problem). The mosquitoes and other preserved thingies were then passed on to our genetic labs where painstakingly the bits were sorted out and compiled into full genomes. Remaining small gaps in the resultant genomes were filled by the bland and generic genes of amorphous and prototypical organisms, namely, members of the British Royalty.

The resultant re-created creatures were put through a full battery of tests to ensure their authenticity. We had a spot of bother with CGI specialists who complained about them not looking angular, awkward and scruffy enough and not roaring every 2.3 seconds for no apparent reason. But after an encounter with some more-than-merely-life-like sabre-toothed tigers, giant short-faced bears, and a pack of dire wolves, they were not complaining any more.

Having satisfactorily solved that problem … what? You say you've heard of this sort of thing before? Ah yes … well, this is something entirely different! This is no theme park on some island who-knows-where, and these aren't dinosaurs and anyways that was just a movie. This is real. Also, we're only using species that actually lived on this planet during the last one or two million years, mostly with humans, both primitive and modern, and the extinction of which was probably to some degree human-caused or human-exacerbated or whatever … bottom line, they were cool, and now they're gone, but we think it would be cool if they were back again. They're our palette, and our canvas is the whole world – we will paint them back into the picture. We're just turning the tables. Restoring the balance. Rewilding. What could be wrong with that? It's environmental justice, man! Get with it!

OK. To get back to the story. Having recreated the genomes and developed a way of easily expressing them phenotypically, we've assembled and packaged it all into a handy application you can download onto your cellphone. Nothing could be simpler to use. It's like taking a photo, only in reverse – select, point, click and presto! A living, erstwhile-extinct creature, right there for you and everyone else to enjoy! And once you get bored with it, merely select another and click it into existence!

Now I am sure you are already bouncing up and down and salivating uncontrollably with excitement at the prospect of making use of this once-in-a-lifetime product. 'How, and how soon, can I get it?,' you ask, 'and what is the price?' Well, I am happy you asked. Simply dial the number '01011001' and follow the instructions for downloading. The full procedure will take less than a minute! The price is … your immortal soul, bwah hah hah! No, just kidding! We already have your genome, and (since Facebook is merely another of our projects) your most intimate private details – which is worth a lot more in practical terms. In fact there's not really anything we want from you since we're already in control of the world. We're already having our fun by playing God. Now you just get this thing already and have your fun with it! We'll just watch (snigger, snigger).