We went to Troy on Saturday. We had debated this trip weeks before we even left for Turkey. My mother-in-law had been there once and didn't want to go again. She said that there was absolutely nothing worth seeing. I said I didn't mind, and I'd go alone; she could stay at the hotel for the day. My husband was with his mum (naturally, he always is), so I said that was fine, he could stay with his mum for the day.

Now the original journey we booked included three excursions, with the option to book three more excursions as well as supper for each day once we were in Turkey. Alternatively, you could book any (or none) of the three additional excursions. I had said I'd happily spend the €45 to see Troy. In the end, we booked yet another package (for an additional €100, so €229 in total which included lunch and supper for each day as well as entrance fees and all guided tours). And so it was that my husband and his mum came along to Troy after all – and they didn't regret it.

After a very good breakfast we left early: Troy was a few hundred kilometres away, so it was going to be a long drive. We arrived at about 11am. We drove through the Ida mountains. I was surprised they were in Turkey, solving crosswords had made me think they were in Crete. Well, there are mountains of this name in Crete and in Turkey! It was a lovely drive along the Mediterranean cost and through (and over) the mountains. During the voyage, Yekta told us the mythology connected with Troy, as well as the real reason why people tried to conquer it: Troy used to lie directly at the sea (it is now roughly five km inland, a fate it shares with so many other towns). Ships which wanted to pass the strait had to wait for a favourable wind before they could go on, and so they lay at anchor at Troy for days or weeks, paying high fees for the privilege of anchoring there. This made Troy a very wealthy town, and so it is not surprising that others wanted to eat that cake, too.

The first thing you see on entering Troy is the Trojan Horse, of course. You can climb it and have your photo taken, and that's exactly what I did. 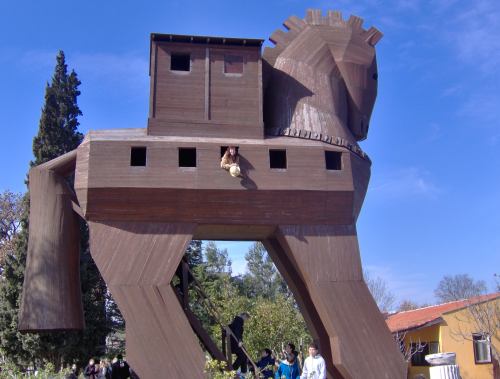 I'm not sure whether it is true, but Yekta told us that one of the first questions American tourists use to ask is whether it is the original horse. I guess it is a joke made at the expense of Americans. I'd like to know what they tell the tourists from other countries about us German tourists. Or maybe it is good that I don't know.

The ruins of Troy are fascinating. So far, they have discovered at least ten different layers from various centuries. Some were built of clay, and when the enemy tried to burn the city walls, this clay turned to brick, making the walls even more stable in the process.

During our guided tour through the premisses, I learned that Heinrich Schliemann had not been a hero, but a barbarian. He didn't even discover Troy, and he wasn't interested in archaeology at all. He was searching for the legendary treasure of Priamos, so he ruthlessly dug and dug to find it. He had not asked permission to dig where he did, so when taken up on it by the owners, he told them he was doing a scientific experiment which the Turkish people would profit from. However, the peasants weren't interested in fame or experiments, but in the large stone blocks Schliemann had dug up, and which they could use for the bridge they wanted to build, and so an agreement was found. Schliemann destroyed an awful lot through his reckless digging. He found a treasure, but it is now believed that the treasure is a lot older than the one he thought he had found. To cut a long story short: you can read up all this and more in books or on one of the various websites about Troy.

We had a very pleasant tour through the area, and we could even spot Gallipoli in the distance, which had been a very important battle site during WW1. I have since learned that Canakkale (where Troy is located) belongs to Europe as well as to Asia, so I was on two continents at once!

After a visit to the souvenir shop, we had lunch in a combined post office/restaurant nearby. This time, it wasn't a buffet, but some plain fare, I forgot how they called it. On enquiring whether it contained meat (which it did), the waiter took away my bowl and I had a nice vegetable dish only five minutes later, without any fuss. Afterwards, I went to buy the booklet Troja by Mustafa Askin, which Yekta had told us about. Conveniently, the author was at the restaurant to sign any copies tourists bought, so mine has a 'personal' note from the author.

On our way back I made a couple of photos from the sea which reached directly to the road we were driving on. It was most impressive. We had a short break at some garage (for those who needed the toilet and a 'burnt offering' as Yekta called it. Here, the bus got a good washing. The bus was kept very clean, btw.

Back at our hotel, I happened upon some members of a football team who had arrived that day, while I was on the patio for my personal 'burnt offering'. Again, communication was difficult as there was only one young man who understood and spoke a little English. Again, one of them gave me his Facebook details. Again, I couldn't find him on Facebook. Oh well, we couldn't really communicate anyway.

It had been a marvellous day, and the next day would find us changing hotels once again, so we had an early night.