Our first day in Turkey wasn't over yet. After we had been to Didím, we went to see Milet.

Milet used to be an important and rich harbour city. Like a lot of other such cities, it lies inland nowadays, roughly five kilometres away from the sea due to the river Meander having meandered in a different direction, leaving its sediments between Milet and the Gulf of Milet, thus cutting the city off its most important trade route – for instance, there was no direct route (over land) between Milet and Ephesus.

Nowadays, most of the town is buried, and large parts are covered in water. We were told that when the archaeological teams come to excavate more of the town in summer, there is a constant noise of water pumps, trying to drain the immediate area of the excavation site. You can see the water in the photo further down.

The loss of trade routes (and thus income) as well as the area turning into a swamp with the ensuing mosquito population causing diseases sealed the downfall of Milet as an inhabited town. The demise was slow, though; the latest building is the Ilyas Bey Mosque built in the 15th Century. 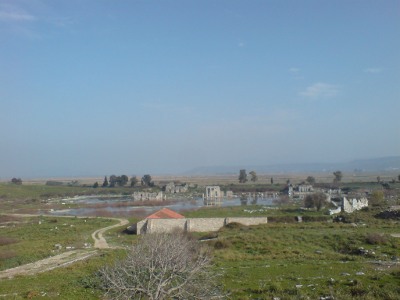 Today, the area around Milet is used for extensive agriculture. It is mainly cotton which is grown here, which adds to the problem of large parts of Milet being under water.

We walked around for a bit, then stopped for a look into the distance, where we could just spot the sea. On our way over to the Faustina Baths we suddenly heard some loud bangs. Our guide stopped and pointed to some spot in the reedy bit next to the path: there were huge tortoises. Apparently two males were fighting for one female. Our guide said it was mating season. I pointed my camera in the direction of the noise and managed indeed to take a photo of two tortoise backs.

We heard the muezzin call, probably from the nearby mosque. It was late afternoon.

I wanted to take a closer look at the Faustina Baths, so my mother in law said she'd go to the bus – she had enough of climbing steps for the day. I took my time, took a few photos (the baths are dry, whereas the nearby gymnasium is under water), then I slowly walked back in the direction of the bus. On my way there I stopped at one of the many stalls lining the street and had a glass of tea. Beverages are generally available at a good price: usually, it's €1 for Turkish coffee, Turkish Tea, or freshly pressed pomegranate or orange juice. The stall owner asked me to exchange her coins for a banknote, which I was happy to do. Our guide had asked us to do this, so the people can bring the notes to the bank and exchange them for Turkish Lira. She gave me a bottle of water as a 'thank you', which was surprising and very generous. They sell those half litre bottles of water for 50 cents in Turkey.

When I arrived at the bus, my husband was there, but no trace of his mum. We asked some others of our group, but nobody had seen her. We were more than just a little worried, because she had been quite absent-minded, and we wondered just where the hell she had gone. I went to have a look in the toilet house. The woman there who charged money for the use of said toilets didn't understand what I wanted, but in the end she let me go to call my mother in law without charging me money. No mil there, so back to the bus. No mil there, either. Now my husband was really worried, and he went back the way we had come. Turned out, she had wandered off a bit and stopped at one stall to have three glasses of orange juice.

Next to the buses, the photographers who had pursued us in Priene had prints of the photos they had taken for sale. At €3 per photo they weren't expensive, so we bought one photo of each of us.

Our purchases done, and with everybody having got back to the bus, we drove 'home' to our hotel. Our guide told us that we had to be at the bus at 8.15am the next morning, suitcases and all, since we were going to a different area and another hotel the next day. Breakfast was available from 7am and dinner from 7pm, so after we had arrived at our hotel, we had time for a shower before going down for dinner. The buffet was marvellous. Turkey must be a vegetarian's paradise, because most of the dishes are vegetarian (although there are some with meat, too). The desserts were my downfall, I just couldn't resist them.

After all the walking and climbing (and getting up very early) that day we were exhausted and went to sleep at 9pm, after we had made sure that our luggage was ready for departure the next day.