Max and Friend appear to be having a Steinbeck moment here. Even if you're not literary, we think you'll enjoy this story.

Some Terrible Figs Been Happening 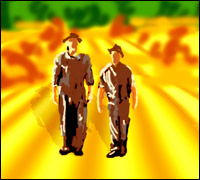 That Spring, Max had his bunk in the harness-room, a little shed that leaned off the wall of the barn. He had accumulated more possessions than he could carry on my back. He possessed several pears, a pair of rubber gloves and a single barrel. And he had books, too. A tattered copy of Lawrence and Hardy: Literary Laughter and all of Barbara Cartland's code books. He had a few dirty magazines in a box labelled 'Secret' hidden on top of his bed. A large nail hung from a pair of gold rimmed spectacles he wore over his eyes.

It was Saturday night. Max sat on his bunk. In one hand he held a bottle of liniment, with the other he rubbed his trunk. Noiselessly, I appeared in the doorway.

Max said sharply: 'You got no right to come in my room. This here's my room. Nobody got any right in here but me.'

Outside, the little evening breeze blew over the clearing and the leaves rustled and the wind waves flowed up the green pool.

Max said craftily: 'Tell me like you done before.'

I said: 'Guys like us got no family. They make a little stake an' then they blow it. They ain't got nobody in the world, not even robots.' I clambered on the bed and kicked Max to the floor so as I could get a better look at the back of his fat blue head, at the place where the spine and skull were joined.

'We'll have a cow,' said Max, 'An' we'll have maybe a pig an' chickens. An' down the flat we'll have a little piece of alfalfa.'

I raised the gun and brought the muzzle to the back of Max's head. I pulled the trigger. Max jarred and settled slowly to the sand.

After I'd cleared him up and taken the bins out, I wrote a letter to his mother:

He didn't have no fun. And he stank to beat hell. I shot him for you so that it wouldn't be you that done it.

The Big Time was snapping its fingers and asking for Max.