Thanks and a tip of the tinfoil hat to Cactuscafe, who – like Triandafyla – has a way with words. 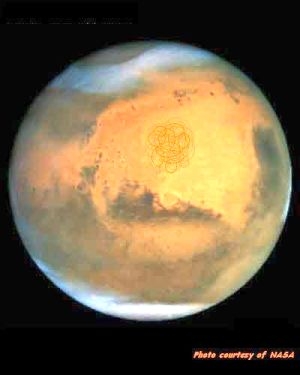 The Rose of Mars was about to bloom, and I was not about to miss it.

Mind you, it had been a rough slog getting there. My dune buggy broke down three times. The old junk heap was held together with bubblegum and bobwire (literally), as I'd been out of work so long there weren't enough creds in the account to pay for extensive repairs. Lots of people were hard up, due to the system-wide recession, so I wasn't out of place in the scruffy crowd that gathered in patched jeans and worn t-shirts to pay homage to one of the universe's natural wonders.

The Rose bloomed once every 500 years, so it was no wonder the early telescopes didn't pick it up. Anybody from the early days of exploration who saw the phenomenon would have rubbed his eyes and sworn off that hot toddy before hitting the observatory. Now that the periodicity was recognised, the usual suspects – scientists, newshounds looking for filler on a slow day, and space hippies like me – gathered around, hoping for an insight, a story to tell, or the inspiration to keep going. We hoped the Rose would speak to us, tell us something, or lead us in the right direction.

The scientists said the circles in the sand, made by rapidly forming grooves, were due to some sort of shifts in the weak Martian magnetic field affecting the minerals. The reason for it was still not adequately explained. Now, at Camp Schiaparelli, the folks with the oscilloscopes were out there measuring. I cared not. I parked my buggy with the other space trash, and went in search of the beer tent.

Venusian mead was being peddled by a fellow in long braids, while his sound system played Magic Carpet Ride. His prices were reasonable, so I snagged a bottle, grinning at him. "Nice music."

I took my mead over to the shade of a paragum tree, enjoying the sensation of still soil beneath my rear rather than a vibrating buggy-seat, and surveyed the crowd. My kind of people: Long-haired, unkempt, dirty. Most of them with smiles on their faces. Some of them with paint on their faces. All with a live-and-let-live philosophy. Over at the edge of the encampment, past the do-it-yourself habitats and the port-a-johns, some Wiccans were making a sandpainting, a model of the Rose as it unfolded. They were chanting something to themselves. I don't speak Wiccan, but I caught the word "Evoe". That's about all the Wiccan I know.

I dozed the afternoon away, not too worried about shelter come nightfall. I knew somebody would take me in. As the day got later, everybody trekked up the hill that provided a view of the growing Rose. The sun, low on the horizon, would highlight the Rose pattern in the red sand. I went to worship with the rest of them, stepping carefully on the path to avoid sandworms, It was bad luck to crush one. The gingery soil crunched beneath my boots.

The sight was worth it. Miles and miles of overlapping circles made the Rose, dark red in the shadows, bright red in the afternoon sun. We held our breaths, and then even the scientists applauded. Ain't Mother Nature grand? The Wiccans started singing, something Egyptian, I think.

It was then that I saw her. Her bronze skin shone in the late sunlight. Her eyes twinkled – literally. She smiled at me and said something in Martian greeting, and I was hooked.

I should point out that I'm human. But unlike a lot of my species, I'm not much of a Lookist. An extra pair of arms just means more to love with, and I've seen green or purple skin that will outshine alabaster or ebony, any day. Triandafyla was 100% Martian, but as I saw her, backlit against the Rose, I could see her aura – red and gold, with a band of electric blue – and I had never seen anyone so beautiful in my life.

I stammered a reply. My Martian accent is horrible. She laughed a musical laugh, asked my name. I thought I must look unappetising – dirty, anyway – but something in the flash of those faceted eyes gave me more hope than I'd had in a month of First Days. We found a couple of rocks to sit on, she offered me a toast from her flask of Martian brew, and we watched together as the moons came up over the Rose.

Triandafyla's people are welcoming. They don't need much cash, being pretty self-sufficient. What they can use is a mechanic, and I'll do in a pinch. I'm still learning the language, but I'm pretty sure my lady and I jumped the broom a couple of weeks back – at least, if I understood the priest correctly. Either that, or I was elected dog-catcher, but since the dogs are telepathic, I don't think I'd be any good at it.

The Rose will be here for a few more weeks, then it will begin to dissipate. Triandafyla and I go out every evening to sit and watch it, holding hands, me wishing I had a couple more to offer. When the Rose goes, so will the tribe. We'll move on to other hunting grounds.

Last night, though, Triandafyla whispered the best secret to me, just as Deimos rose in the sky. My vocabulary's still weak, but I think I understood her.

I think I'm going to become a father.