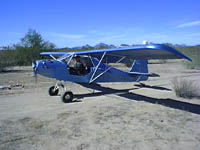 It started with Dean Wilson, who set up Avid Aircraft and designed the Avid Flyer. Dean's ingenuity kicked off the whole folding wing, light aircraft industry; working alongside Dean was Dan Denny a marketing guru.

Dean and Dan later went their separate ways and Dan Denny set up Denny Aircraft, which produced the Kitfox.

The next step in the evolutionary trail led to the Sky Raider, designed by Kenny Schrader who had been working with Dan Denny on the Kitfox.

However, skimming through the press reviews it appears that the Sky Raider is being compared to Piper Cub, that immortal, glorious, tandem two seater first built in 1931 by the Taylor Aircraft Company. Over 40,000 Cubs have taken to the skies over the last 70 years.