Factoid of the day #1: There is currently a trend in Egypt for novelty covers for car headrests. I've had pairs of Minnie Mouses (Minnie Mice?) grinning out at me and a couple of very disconcerting panda heads. It's all rather odd and not a little creepy.

Got up hideously early – 6am (or 4am to you and my body clock). Instead of booking an expensive P&O tour that went to places we'd already been, we booked something independently, courtesy of the 'tinternet. We were met by Mohammed and Mahmud and their nameless driver in a little minibus-type thing at 7am. The drive into Cairo and down to Memphis took four hours, almost exactly. The roads are bumpy, to say the least, even the tarmac ones, and the suspension of the little minibus was extremely soft, which made for a rather disconcertingly bouncy journey. Sleep catch-up was NOT an option.

Factoid of the day #2: Mido is short for Mohammed. When Mahmud told us he has an eleven-year old son, I very knowledgeably said, "So his name is Mohammed?" (all firstborn sons are named Mohammed). "No," says Mahmud, "it's Mido". "What does Mido mean?" asks I. "It's short for Mohammed," he says. *sigh* He was very chuffed that I was a Spurs fan and knew who Mido was!

Memphis is very odd. It was the first capital of Egypt after the two kingdoms were united, but virtually nothing remains. There are the ruins of the temple, but you can't go to them, as they are fenced off behind some houses. So you get taken down the road to a "museum" of bits they found. This is sort of like a miniature sculpture park, only some of the sculptures are 30 foot tall limestone statues of Raamses II. There's no context, there's no explanation or history or even little signs to tell you what you're looking at. If your guide doesn't know, you're stuffed! Luckily ours did. There's also a small sphinx whose face is still in tact. It looks very different to the big one at Giza! There is also a building which is called the Mit Rahina Museum. It's a one room building and contains precisely one artefact: an absolutely massive statue of Raamses II. This one is lying down, because he's lost his legs, but he is absolutely colossal in scale. That's the museum. One item, in one room. I tell you, it's a good thing the Trade Descriptions Act doesn't cover Egypt!

Factoid of the day #3: Cairo traffic jams really should be a Wonder of the World. We were on a clearly painted three-lane road. In FIVE very neat lanes of traffic. In Cairo, the width of the lane is the width of your vehicle, if you're lucky. Those who undertake and overtake will give you just that amount of space, no more, no less. No need to go into a whole other lane just to get past you who takes up less than half, now, is there? Didn't see any cyclists all day. Not surprised, they've probably all long since been squished between over-friendly car manoeuvres. Lots of donkeys and carts, however, who have the sense to stick to the hard shoulder. So would I have done, give half a chance!

From Memphis to Dahshur to see the Red Pyramid (which isn't red any more cos someone nicked all the red sandstone covering it) and the Bent Pyramid, two of the oldest pyramids found. Then to Saqarra for lunch. The itinerary said we would return to Cairo to eat at the Hard Rock Cafe but we begged for this not to happen (!), and instead we went to the Restaurant of the Pharaohs in Saqqara. The food was superb, surprisingly Mediterranean (lots of aubergine and things in yoghurt). There was also a barbecue of chicken and beef with rice (no risk of accidental pork here!) which was yummy. There was a band of three men playing traditional instruments. However, this mostly consisted of the one with the oboe-type instrument (you know the one – the one you see in pictures of snake charmers) blasting it til your ears bled ONLY when you were walking right past them. The rest of the time, they were virtually silent. My ears are still ringing, six hours later!

Then round the corner to Saqarra, which was what it was really all for. The Step Pyramid of Imhotep is believed to be (at least currently) the oldest pyramid on Earth. We were astonished to find that, instead of just a pyramid, there was a whole complex of buildings leading to it – including a dramatic colonnaded entryway, a courtyard with other buildings and, underneath, 28 feet underneath, no less, the tombs of the high priests and those who held positions of authority. Imhotep was the architect, not the occupant. I think his name was King Zoser, but don't hold me to that. It was hot and windy and there was a lot of sand in my eyes and ears at the time! 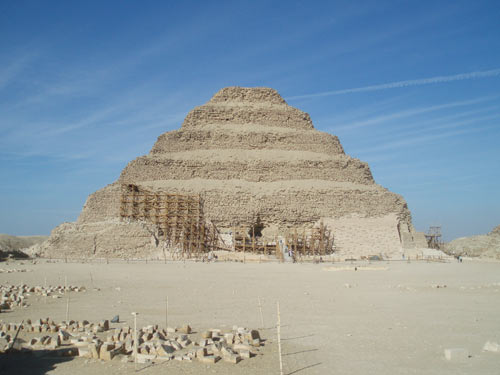 By now our body clocks were chiming tea time so we retired to the J W Marriott Cairo for tea and cakes and posh loos (most important!) before beginning the two hour drive back to the ship. When we got back, I had a shower (sand, lots of it) and then we had dinner in the Orangery (the self-service cafeteria on the top deck that currently isn't self-service to reduce the risk of the noro virus being re-spread around). And now, here I am, uncertain whether I need to pass out or go out, but definitely leaning towards the former as of now... Oh, did I mention it was 24 degrees in the shade today...?