We didn't have a "To Do" list for Piraeus. We've been to both Athens and Piraeus before. We went to Carrefour (French supermarket chain) and M&S, had a cup of coffee in a bar and lunch snacks in another (I didn't eat anything cos I feel like poop - am somewhat hungover, I'm afraid). Then we wandered around the marina for a while, looking at the boats. All different sizes, from itty bitty to OMG! Then back to the ship. 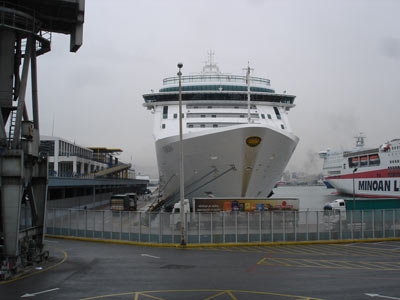 I may have hit a new personal best today. I bought two Christmas presents. On January the 12th. Oh yes. Trouble is, I didn't think to bring the Christmas present book with me, so I can't note down what I've brought for whom. I just hope I can remember when I get back in April!

Walked a mile and a third today. Would have done more but I hurt my knee doing the twist last night, and it started to complain. Got to be fit for Egypt tomorrow, so I had to give in. It's 18 degrees now, which is very nice indeed. Just right. 24 tomorrow in Cairo, so I'll have to dig out the sun cream tonight. I wonder if I need mosquito repellent. Can't remember.

We will pass through the Gulf of Aden, pirate country. So we have a safety drill. I have an inside cabin, so I get to stay in bed! The announcements go on, so eventually I give up and pop my head out into the corridor to see what's going on.

I hear a woman down the corridor telling her cabin steward in no uncertain terms (I think I can use "imperiously" quite safely here) that she will only turn off the lights on one side of her cabin as she has "checked" and the other light cannot be seen from outside.

Now, firstly "turn off your lights and close your curtains" doesn't seem like the most invasive and demanding of requests, at least to me. It's hardly arduous, is it? What's the big deal in just doing what you're told? Secondly, unless you can FLY, you can't see whether your lights show on deck B. It's about 90 feet from sea level or about 75 feet from ground level. You just ain't that tall, love. Even if you could, you can only get outside the ship during daylight hours, so you can't see what it looks like in the dark. Thirdly, seriously, just give it a MODICUM of thought. If they can see a light, they can FIRE AT IT. You stupid woman. Seriously. How complex a set of ideas is this, really? They have speedboats, AK-47s and rocket-propelled grenades. Why would you want to leave a light ON?! This from someone well old enough to have lived through the war and who must surely understand the concept of the blackout. I swear, these people are going to give me an ulcer.

I went to reception and told them what I had heard and the girl I spoke to thanked me for telling her, but she wasn't surprised. She said that I would be amazed at some of the complaints she had received, particularly that there wasn't enough seating in the corridor during the drill. It's a drill. In a corridor. It is important to remember at all times that it doesn't require any amount of intelligence whatsoever to have the money to go on a cruise. Repeat after me...any idiot can afford a cruise, any idiot can afford a cruise, any idiot...

Just to be clear, don't worry, I'm pretty sure we are armed to the teeth (although they would never come out and say so) and we saw them testing the water cannons yesterday. I'm not that worried. It does happen, but they have a system in place. Spare your thoughts instead for the inhabitants of Haiti instead. Their need is greater than anyone else's. 7.0 is a big quake. The scale only goes to 8, doesn't it?

A quick P.S. re: Piraeus. Non-smokers should not go there. Ever. Under any circumstances. All Greeks smoke. Everywhere. Constantly. I honestly believe that the smog in Athens isn't car pollution, it's lung output. Absolutely DEEEEEEEEEEEEESGUSTING. Bleurgh.

PS: Answer to the question posed in the last article: Black Books (said by Simon Pegg at his most supremely creepy).