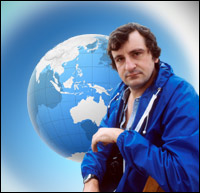 We are very pleased to announce that Professor Marcus du Sautoy will be giving the Eighth Douglas Adams Memorial Lecture. He will be giving a talk on a very Douglas themed number – the number 42!

Marcus du Sautoy is the Charles Simonyi Professor for the Public Understanding of Science and Professor of Mathematics at the University of Oxford and a Fellow of New College. He has been named by the Independent on Sunday as one of the UK's leading scientists. In 2001 he won the prestigious Berwick Prize of the London Mathematical Society awarded every two years to reward the best mathematical research made by a mathematician under 40. In 2004 Esquire Magazine chose him as one of the 100 most influential people under 40 in Britain and in 2008 he was included in the prestigious directory Who’s Who.

The Duke of Dunstable