Well, here we are. All aboard. Seriously the toing and froing necessary to get from your front door to this sofa is quite astonishingly arduous. Not only dealing with minicab drivers who have no idea where South Mimms Services is, but then standing in the freezing cold and slush guarding 14 pieces of luggage until the driver has finished his bacon butty and comes back to unlock the coach. Then the journey with quite nauseatingly soft suspension, way worse than a rough sea! Then mum wants a bag from the coach hold to carry on herself which takes an eternity to find because the whole idea is that you don't see your cases til they arrive at your cabin. Then the queue and security and passport and ticket and sign a piece of paper saying you're not ill and haven't been for two days and have your photo taken and sign your cruise card and hand over your credit card and then put the bags through the x-ray machine and walk through the scanner, but then you have to do it again because, oh, I don't know, it's a day with a y in it.

Then you heave up a rather steep gangplank, show your cruise card for the third time since you signed it and find a lift. Then have to find your cabin. Then realise you're walking down the evens and you're in the odds, which is completely the other side of the ship, so go back down the corridor and start again. Then I get to my cabin and the door handle is so stiff, I hurt my hand trying to get in the room! Which is annoying, because it means your cabin steward's first experience of you is a complaint. Not ideal. He's very sweet, Daniel, although the idea that a person never drinks hot drinks clearly threw him completely. They very kindly put out a kettle and tea and cups and milk and spoons, all of which are rather noisy in rough weather, not to mention mobile in some cases, so, as I don't need them, I always ask for them to be taken away. He was flummoxed. He looked at me like my skin had turned green and I was beeping at him. Absolutely floored, he was. Bless. But I have a rose in a vase and free gunk in the bathroom (you know, eye stuff, skin stuff, blah blah) and some sweeties and a free (small) bottle of water and I've turned the air con down from sauna to breathable, so, so far, so good. I think the layout of the ship (Aurora) is fairly similar to Oriana, but I'm going to go and have an explore anyway. Bye for now, my snow-bound chums.

Walked a mile today round the deck after lunch (three times round the Promenade deck) – mum did a third of a mile with me. It was a bit blowy but it was good to clear the cobwebs. The inside of the ship is very warm and stuffy (to compensate for it being apparently somewhat parky out) and I've been feeling quite headachey as a result, so the fresh air was very enjoyable, even if I did get a little numb in places! Took some photos of the distant rain/ snow clouds while we walked. Just hope they stay distant! 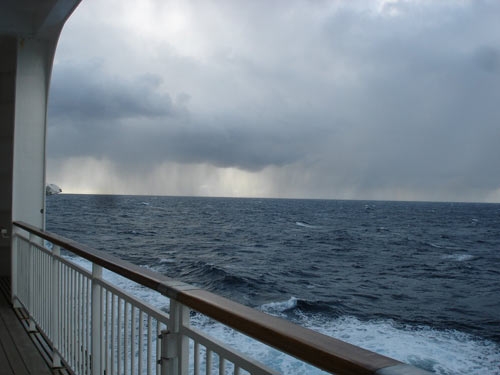 I have bumped into a couple of familiar faces so far – one nice, one not so. In fact, she sat at our table at lunch and it wasn't until after she'd gone that I could point out to mum that she was the rudest person we'd ever met and she'd made me cry on Oriana some years ago. She just randomly insults people. She's obsessed with being thin and just tells people how fat they are, even if they aren't especially. Friends of hers, complete strangers, anybody. She's an absolute cow. And frankly, being 82 is no excuse for bad manners. Luckily she held her tongue today, although she told her friend she should go to the gym with her because she's fat. If she'd said anything to me, it could have got very nasty very quickly. Personally, if one of my friends spoke to me like that, I'd chuck them over the side and be done with it, but, hey, whatever floats your ship, so to speak. If you want her as a friend, that's your lookout, but I'm staying well away from her, thank you very much. Horrible old bag.