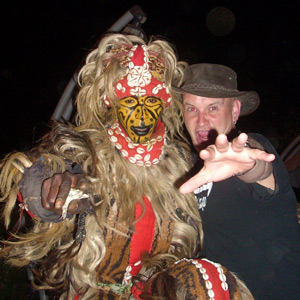 Toubab - A term used by Gambians to refer to Europeans; believed to originate from the old colonial practice of paying messengers two shillings, or two-bob, for their work.

We ate our first ever meal in The Gambia out on the street, outside a little cafe-cum-restaurant called Boss Lady. As we waited for our food, a group of kanturang dancers arrived. Ranging in age from pre-teens to 50 or so, they quickly got in place with their djembe drums and tribal dress, and set about an intense rhythmical onslaught accompanied by some energetic dancing that left few of the toubabs watching unmoved. The stars began to gleam above, our spicy food arrived, and the bush taxis threw up great clouds of dust that gently wafted over to us on the sea breezes. If we were now in any doubt that we had arrived in Africa, the lights suddenly went out all over the Kombos and, accompanied by a yelp from the darkness, a lump of tree fell onto Lainey's head. Welcome to The Gambia.

Djembe drummers are the most obvious of The Gambia's musical traditions. These single drums, usually beaten with the palm, and varying in size from foot-wide bass drums to higher-pitched instruments just a few inches across, are ubiquitous. Perhaps it is their portability, ease of learning and low cost that make them so popular; it is rare to sit on a beach and find there is not one in sight somewhere. Djembe shows, with and without attendant dancers like the one at the top of this column, happen regularly and often spontaneously, and the least one can expect in a restaurant is that a couple of old hands will accompany your meal with their own slant on a few Bob Marley songs. There used to be a wonderful and occasionally dangerous bar right on Kotu beach called Domino's, where djembe drummers would turn up and start playing on an ad hoc basis; it was always fun to watch the tourists jump up and join in with the local dancers, and after one too many beers it was always all too easy to get caught up in the festivities. Domino's is gone now, but the drummers are all still around, and some of the better troupes play in the local hotels and outside Boss Lady on a regular basis.

Djembe drumming might sound a little unsophisticated, with the same 'tune' often going on for half an hour or more without a break, but though the theme may be repeated each part varies regularly; it's rather like a small percussion orchestra. And there's no denying that the drummers are exceptionally talented, while the dancers lend a manic edge to proceedings. Drum lessons often take place on the beach, which I find a little odd – who do they get together with to perform back in Humberside, Helsinki or Hamburg? 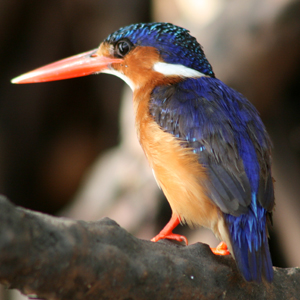 More melodically, The Gambia, and Brikama in particular, is known for its kora players. The kora is a kind of a cross between a lute and a harp with over 20 nylon strings; the player strums and picks to produce melodies, percussion and chords all at once. The kora is a more difficult instrument to play, and masters of the art are usually prefaced by the title of jali – our friend Jali Suso, who by one of those weird coincidences that tend to follow life around at every step taught Lainey's sister the kora back in Devon a few years ago and who is playing at our wedding next year, is actually named Sorry Suso (you can hear some music he recorded here in the UK on his MySpace page). Jalis are quite common in hotels and restaurants, though it is a shame that most perform a kind of gently cheeky comedy routine intended to slightly embarrass their listeners; most, like Sorry, are incredibly talented musicians. Our hotel's resident jali makes very little from actually playing his instrument, and makes most of his money selling little replica koras like the one that sits proudly on my mantelpiece. It's a bit like Vanessa Mae making a living by selling mini-violins door-to-door.

Most of the entertainment in the hotels is a kind of crossover between local influences and what the hoteliers imagine Europeans want to see. There's a bicycle acrobat, who turns up with a bicycle and hops around on one wheel for an hour or so. There are local bands who play UB40 and Bob Marley. Occasionally, there will be a troupe of djembe dancers or a kora player going around the tables, but the trend seems to be for hotels to book more and more European-style acts.

This is a real shame. The less-sophisticated acts are an echo of the early days of tourism in The Gambia, harking back to a romantic era when the hotels really were shacks on the beach and entertainment was provided by anyone who had any vague sort of talent. I'm wary of anyone who uses a phrase such as 'The Real Gambia', as if the need for a few home comforts somehow devalues the experience, but there's a real charm and a sense of cheeky fun in the performances given by the people who don't have the resources to get into the hotels. One of my favourite acts is a group of three old drummers who sing very odd versions of reggae and 1960s blues songs over their irregular rhythms.

None of the groups you see outside the hotels get paid for their work, so if you go make sure you have a few dalasis in small change to tip them with. They don't make a great living, but it's important that they make enough for it to be worth their while. If local musicians are making money, then making music will continue to be a viable career, and the more they can earn the more incentive there is for them to practice and improve. It's important that young locals have enough ways of making money from tourism to accommodate as many workers as possible, and anyone who has been hassled by a bumster will tell you that the fewer of those there are around, the better.