The majority of this write up has been unashamedly lifted from the page of the wonderful Abi... all additions are down to the editor and placed in italics!

Christmas is not complete without an h2g2 party and though it came early this year, it turned out to be a storming occasion none the less. 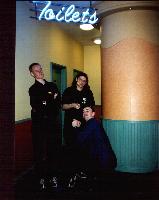 For those who only venture into South London en masse, arrangements were made to meet Abi under the clock at Waterloo. Abi claimed to have not to have realised that Waterloo would be packed full of rugby players as England were playing Argentina at Twickenham that day. The incredulous looks on several Researchers' faces, however, told a different story.

Braving the Northern Line, the intrepid bunch of front runners arrived at the Elephant and Castle Superbowl, to find the others waiting. Introductions were made, old friends greeted each other warmly and members of the 'Celibacy' thread chose their targets for the evening.

Allocating Researchers to lanes was a little laboured, but those who were there to support grabbed a drink with a view and proceeded to ignore the bowling. In the true tradition of h2g2, this year's achiever of the hallowed bowling score of 42 was Coelacanth who was later awarded a T-shirt for her achievement. At the start of the bowling Ashley looked a strong contender. Asked for a quote he said:
'I've been playing with balls for most of my life'.

a remark which did not pass without some amusement from those present. TowelMaster avenged himself on Mark Moxon by scoring one more then Mark did at their previous encounter and then followed this up with a magnificent 193. Some you win, some you lose eh Mark?

The Meet was, as one would hope, graced by the presence of the incumbant Virtual President of h2g2, Peregrin, who was only too happy to pose for photographs with his Vice, Bluebottle and a graceful-in-defeat Demon Drawer.

Also present was the Post Team... represented by Pastey and Shazz, both modelling a new line in Tshirts... the extremely exclusive Post New Look.

Tigerlilly's command of logistics could not be faulted as she engineered moving over forty people over the river to the Wellington pub. Unfortunately the same cannot be said of the pub manager who had failed to reserve the seating area the Community Team had negotiated. But when people had finally intimidated the rest of the pub into leaving and had a beer in their hand it was time for the roistering to begin. Demon Drawer and Fashion Cat did their now world famous impression of Charles and Di kissing for the crowd while everyone else was dazzled by the refraction coming off the diamond in the engagement ring.

Pastey did his best Chris Tarrant impression while Abi grabbed the opportunity show off the wink and the attitude problem she had been practising all week as she took on the role of Anne Robinson for the pub quiz.She was, however, outdone by Ashley who definately had the attitude and the 'look' off to a T, but not the wink! Mark Moxon was uncanny as Bob Holness as he took charge for the round on the Editorial team. Winners by a short head after a dramatic tiebreaker were the Ancient and Pissed Team comprising of Lucinda, Niz, Mrs Pastey, Shazz and TigerLilly.

It was at that point that Pastey's body physically gave out and he went to sleep on a table. Understandable when you consider he had been up since 3am.

After that the evening wore on into drinking, drinking, more drinking... Many friends were made and old friendships rekindled, there was much yelling of
'You look exactly like I thought you would!'
and whispering and stroking of legs.

Infamous throughout the evening was the seating dubbed 'perverts corner' or just 'that corner'. Many researchers braved entering the fray... the result was always the same. Limbs everywhere and plenty of amusing photo-opportunities.

Some researchers had to leave early, but most stayed to the bitter end until the usual tradition of 'getting thrown out of the pub'. Even then, events still continued as everyone spilled out onto the pavement.

Thanks to everyone who made the meet up such a success. We hope you enjoyed it as much as the Editorial Team did!

We all most certainly did Abi!

This write up and a full list of attendees may be found on the Community Social write-up page, but why not drop over to the following sites and marvel at the pictures: 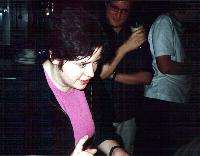