Before school started all the other Wzungu returned to Kilimatinde. Peta
was teaching English at the school, and her son Reuben was teaching
Chemistry and Physics and helping to set up the new science labs. They and
Joanne are all working in Kilimatinde for a year. Matthew and Bill only had
2 weeks left in Kilimatinde when I arrived; Bill was teaching some English
and History, and working on a development plan for the college, and Matthew,
an engineer, was building 2 new water tanks at the college, and assessing the
situation surrounding Kilimatindes former dam, which the Trust is raising
money to rebuild. 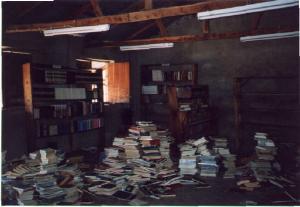 I started work on the library first, giving Christchurch, Kilimatindes
Anglican church, a week to organise the basis of the Kindergarten... primarily a building and a teacher. When I arrived, St John's College library
was crammed into a tiny room, full of rickety shelves, and numerous unknown
and damaged books. I was working with Rose Malugu, a lay sister who speaks
almost perfect English, and has a long running dispute with the Bishop as to
whether she should be allowed to go and study for a theological degree (he
thinks she will want to be ordained if she gets a degree and he disapproves
of women priests, while she maintains that she just wants the further
education). Lovely though she was, Sister Rose had very little idea of how
to run a library. So I borrowed VSO's book on setting up and running a
library from Peta, and set to work.

First we arranged for the library to be removed into a larger room, the
second year bible student's classroom, while the 10 of them were to move
into the old library. We really needed to have new shelves built, the
existing ones were unstable, and of varying heights, creating problems when
it came to arranging the books on them. However, if we had waited for the
college's general handyman, Mr Mdoma, to make the shelves, we would probably
never have got started on reorganising the books, so one afternoon we let
chaos loose.

Imagine you want to move a few hundred books from one room
to another, you would naturally want to keep them in some kind of order.
The ideal situation would be to move one bookshelf at a time, first the
shelf, then the books, cataloguing them as you go, and then reorganising
them when they are in the new room. Ideal situations do not occur in
Tanzania. We were invaded by 20 or so second year girls, with very little
English, and seemingly less patience, and the books were all removed from
the shelves and then unceremoniously dumped on the floor in the new library,
in even less order than they had been in on the shelves. We then had to
negotiate the shelves into the room with the assistance of some of the boys,
trying not to stand on the books, or place the shelves in front of the
window, as we had to be able to open and close the shutters to give the room
some light (there is only electricity at the college from 7-9pm when the
generator is running).

The next stage was to try and group the books according to subject so that
I could start getting them onto the shelves. This went a little bit better.
I managed to communicate that I wanted no more than half a dozen assistants
besides myself and Sister Rose. Then I put bits of paper on the floor
which subject names on them; English, History, Science, Biblical etc.., and
we managed to get nearly all the books into the right piles. There were
naturally a few strays, and also books that defied categorising (a Fiat
handbook and Taurus stars for 1996 were just two) so we ended up with a
miscellaneous section. The organising of any library... even if it's just
the books in your bedroom... is highly individual so, for the rest of the time,
I was effectively working by myself, with some assistance from Sister Rose... much of it in categorising many books written in Swahili, which I didn't
understand.

The work was straightforward, but time consuming, checking all the books
were in the right subject groups, arranging them alphabetically, or
according to certain subject areas... such as periods of history... and then
working out which shelves the books would fit on. This last proved to be
the most complex problem as the design of the shelves meant that you would
suddenly be unable to fit them on the shelf where you wanted them to be.
However in the end the floor was clear and, miraculously, we had one entirely
clear bookshelf just waiting for the library to expand. This was achieved
by putting only one or two copies of each science textbook on the shelf, and
sending all the others over to the new science laboratories for use there.

Then I had to begin to catalogue all the books. In any library each book
needs its own individual accession number, and also to be coded according to
subject. This is what makes setting up a library a full time job, and of
course the library was not a full time job for me in Kilimatinde, as I was
also spending 3 hours a day at the kindergarten. By the time I left I
had managed to number over 2000 books, and was nearing the end of that
chore. I had also planned a coding system, which I left with Sister Rose to
continue after I left. She had the use of Peta's book as well, and also the
advice of Peta who is an English Teacher. The students at the school were
beginning to use the library more regularly... there was always an influx
just before an English lesson to which they had to take a book to read, and
with a borrowing system up and running there is a checklist of who has taken
out books, so hopefully the number of stolen books will decrease, and the
number of students borrowing books to read will increase. 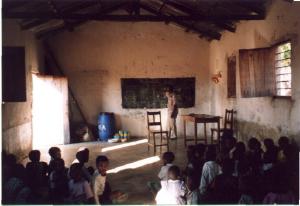