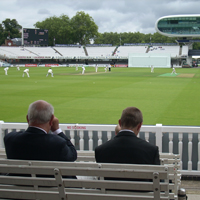 'Hello, my name is Skankyrich. Is that Mr Chairman? Yes, I've been looking on the Lord's website, trying to find out how to get tickets for the Minor Counties Final on Wednesday. I just happen to have the day off, so I thought I'd come along and cheer the lads on. Are they still available?'

'Oh, no, no, no. No advance tickets. Of course, you can buy them on the door. Only ten pounds. Be marvellous to see you.'

'Right, great. I just need to work out how to get there. The train seems rather expensive.'

'Oh, no, no, no, old boy. Wouldn't dream of the train. Get the supporters' bus, leaves Newton Abbot at six. Only twenty pounds. Super deal.'

'Hey, that's not bad. Thanks very much! I'll see you there!'

'Join Devon County. Only twenty pounds. As a member, of course, you'll be allowed into the Pavilion. Long Room and all that. Marvellous. See you there.'

You can feel the wink down the telephone line.

A bald man in a cheap pinstriped suit comes upon the Lord's Pavilion and waves his membership card at a very tall doorman. The doorman frowns, peers at the membership card and breaks into a broad and friendly smile.

The bald man hops up the half-dozen steps and unexpectedly finds himself in the Long Room. He stops for a moment to gaze in awe at the sea of green visible through the huge windows, then turns to find he's been trapped at the side of a table by Devon's opening batsmen. They go through their warm-up procedure, watched by a few MCC members, who have also noticed the stranger stuck behind the table.

WG Grace stares down at him through an oily canvas with barely-concealed contempt.

Lord's is quiet, the crack of leather on willow aside. A few members drift in and out of the Pavilion, more interested in The Times and a chat than the cricket. Of course, they're MCC members; they come to Lord's and watch the Test Matches. Why would they really be interested in the Minor Counties Knockout Cup Final?

A man in a fluorescent yellow shirt keeps distracting the batsmen by moving behind the bowler's arm. He doesn't appear to realise that he's stopping play every time he stands up. The members tut, and one of them is dispatched to have a quiet word. It's just not cricket.

The bald man wishes his Grandad was here. Grandad would be scoring the match with him; he'd have sneaked in a few cans of Guinness; they'd chuckle together when the batsmen missed out on easy runs. The two bald men together are the best cricket-watchers around, he reckons.

'It's such short notice though... the mechanic is coming for the car... I can't really afford it... I don;t like cricket as much as you...'


Grandad, brother, cousins, friends. All left behind. So Lord's is his alone. He opens a can of Tanglefoot, and decides he rather likes it that way.

The bald man has just returned to the Pavilion after a tour of the ground, looking in awe at the Pavilion from every possible angle. He gets his membership card out again.

The bald man is starting to sound more like Blowers every minute.

Then Neil Hancock comes to the crease, and takes over. He batters an unbeaten 53 off just 26 balls and returns to the pavilion unbeaten. After 48 overs, Devon have 239; after 50, 290. One ball clears the grandstand. It's astonishing stuff, and Hancock is given a standing ovation by the members as he walks off.

So they do appreciate cricket after all.

The bald man opens a door high in one of the Lord's stands and finds himself in a very posh restaurant. Not wanting to show he has taken a wrong turn, he wanders nonchalantly up to a waitress and asks to see the menu. Stunned at the prices, which represent the better half of a week's wages, he asks to see the wine list, at which he frowns.

'Thank you, but I won't. Do you serve tea later in the day? I normally take a scone or two around four.'

The bald man is eating his sandwiches with an expensive half-bottle of wine in the stands.

The MCC museum is quiet. Outside, Berkshire are recovering in fits and starts without ever getting the upper hand. The bald man stalks the rows of bats and signed programmes, seeking his prey.

And eventually, there it is. The sparrow hit by a ball from Jehangir Singh out in the middle in 1936, killed stone dead, and now stuffed and mounted for display. He stands and stares at this odd object from cricket history for a while, wishing there was someone he could share the story with.

'Thanks very much. I've seen the sparrow. I'll come back and see the rest another time.'

It's some time before he realises that 'the rest' includes the Ashes urn.

He's spent the rest of the afternoon in and around the pavilion. Well, it would be rude not to, with Pedigree on draught. At one point, he'd swear he's seen Stephen Tompkinson from Drop the Dead Donkey, but quickly dismisses the thought. He's had time for a token Pimms as well and, when the last Berkshire wicket falls with the score on 250, he's as happy as he is bald.

Devon take the trophy and, as they do so, the bald man wanders out onto the hallowed turf. He gazes longingly at the square, wondering what it would be like to bat on. Just one ball. He'd be out for a golden duck just to be there. It'll never happen. Shame.

The Westcountrymen are ecstatic. They're at Lord's being applauded by the MCC. And for a day, the bald man is one of the select few allowed in the sanctuary. After the ceremony, he shows his pass one final time and walks from the pitch to the Pavilion through the MCC gate.

Who has walked here before?

He can't help but shudder. 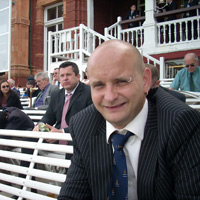