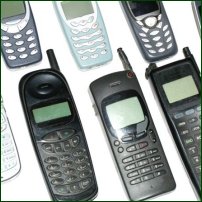 For some years now, scientists have been struggling with the apparent paradox that global warming appears to be affecting the ice caps disproportionately, with polar ice melting far faster than even the worst-case models predict, despite receiving a far smaller dose of solar heat than more equatorial regions. Now, finally, the mystery has been solved. Unfortunately, the blame can be directly attributed to a seemingly innocuous device already mired in controversy over claimed adverse health effects - the mobile phone.

During the war, telecommunications engineers realised that HF radio waves could be 'bounced' off atmospheric layers, and thus sent over far greater distances than conventional line-of-sight radio links. The effect is called refraction and is essentially the same as the bending of light that appears to show a ruler, partially submerged in water, as bent. The angle of reflection is dependent on the frequency of this so called 'Skywave' at the boundary between layers and the relative difference in the speed of light in the two mediums. Skywaves enabled the wartime authorities to communicate across the Atlantic long before the advent of satellites or trans-Atlantic submarine cables, and are still widely used in maritime communications.

A mobile phone, held vertically to the ear, will emit radiation upwards towards the earth's ionosphere. The ionosphere, as seen from any point on the earth's surface, can be considered as the inner surface of a hollow sphere. Any signal pointed at it will tend to bounce around, following a roughly circular path around the inside of the sphere. Traditionally, engineers have assumed that the skywave will travel in a straight line relative to the surface of the earth, and for HF communications in the 3 - 30MHz band this is generally true.

The breakthrough came when researchers realised that the ionosphere, rather than being a perfect sphere, mirrors the earth's oblate spheroid form which has a larger radius at the equator than the poles. This means that the ionosphere can behave a bit like a parabolic reflector - like a satellite dish - and will tend to reflect the radiation in a certain direction, regardless of the angle of incidence. The effect is negligible at HF frequencies where the relative difference in curvature at different latitudes is dwarfed by the signals' wavelength, but starts to become important in the UHF band used by mobile phones. The shorter wavelength increases the refractive index of the ionospheric boundary, increasing the degree of bending. In practice, the skywave no longer travels in a straight line relative to the earth's surface but is slightly deflected by each reflection. Considering the frequency of GSM mobile phone radiation at between 400MHz and 2,000MHz in the microwave band, simple geometry shows that a significant proportion of reflected radiation will be directed towards the poles: the north pole for users in the northern hemisphere and south pole for those in the southern hemisphere.

The earth's landmasses also tend to reflect microwaves, which could typically bounce between the sky and the ground several times before finally striking, and being absorbed by, a suitable medium. The mechanism is exactly the same as the principle of a microwave oven, in which the waves reflect back and forth between the reflective metal oven walls until absorbed by the food. As well as the directed reflection effect, the earth's magnetic field helps to concentrate the beams towards the poles in the same way it channels and accelerates particles from the solar wind through field lines to create the auroras. The overall effect has become known as "geopolar radio frequency lensing", in reference to the tendency of the earth to focus radiation at a particular spot.

The atmosphere is generally transparent to the passage of microwaves except at boundary layers, but polar ice is opaque. Some of the phone signal's power will therefore proceed unhindered to the ionosphere, where it will bounce back down to the ground and up again perhaps several times, with each step taking it further north or south until it eventually encounters polar ice. As water molecules, including frozen ones, are slightly polarised they tend to vibrate and heat up when excited by incident radiation at the correct frequency. Again this is the effect that causes water-rich food to heat up in a microwave oven. Every time you make a call, you are warming the polar ice by a small but measurable amount.

Cellphones are not the only microwave emitters of course and are among the least powerful, but most fixed antennas are high-gain line-of-sight devices that seek to maximise power transfer by directing a narrow beam straight towards the receiver, thus ensuring that very little radiation is wasted. Cellphones also have high-gain antennas that produce narrow, directional beams but users rarely point their phones at the nearest mast, and perhaps more importantly the tightly-focussed beam is not subject to the inverse-square law that severely limits the propagation distance associated with more conventional, isotropic antennas. This unique combination of essentially random direction and long-distance line-of-sight capability ensures that a certain quantity of radiation will be reflected and 'captured' by the geopolar lens, regardless of where the phone is pointed.

To quantify the effect, calculations indicate that of 100mW of power emitted by a single cellphone at 51° 40' north (Greenwich), as much as 20mW may reach the Arctic Circle. One million such phones emitting continuously would dump 20kW of power in the ice; sufficient to raise the temperature at the surface to a depth of about 2cm by nearly 0.5 degrees over the course of a year, discounting seasonal factors. While not catastrophic in itself, when combined with expected levels of greenhouse warming this degree of heating could be sufficient to kick-start a runaway melting of Arctic glaciers, particularly if the radiation is being focussed on particular areas. The meltwater provides lubrication for the glaciers, allowing them to slide more easily into the ocean where warm currents from the tropics finish them off. The calculations are very crude at this stage, but it is worth noting that there are already nearly 2 billion registered mobile phone users in the world and the number is rising by the day.

This very elegant theory also neatly explains another persistent climate change mystery: why glaciers in the Arctic are disappearing faster than those in the Antarctic. This is simply down to far greater numbers of cellphone users in developed countries concentrated in North America, Europe and Asia. The theory now needs fine-tuning to determine whether localised heating effects may exacerbate the problem, and if funding allows, an expedition will be mounted to the north pole to take some real-world measurements. Meanwhile, UK-based campaigners are already lobbying the government to adopt a precautionary principle and place immediate restrictions on cellphone use and the Green Party are expected to issue a press release stating their policy on the issue in the next week or two.