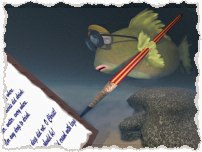 Me and my friend Peter, we used to sit for hours,

well it felt like hours back then, hitting and scraping

a sandstone block that lay in the lane by Gran's.

We were quite happy at the end of an hour, or what felt

like an hour, when all we had was an eggcup of sand.

Back then, at sixes and sevens, we had forever

to make a beach out of an old sandstone block.

It was there already, with the best sandcastles ever

and we'd buried each other, just heads and feet

sticking out, lots of times.

We had fights on occasion, me and my friend Peter.

Really, he did the fighting; I was just obstinate

until he stomped off, red and fizzing

'cause I wouldn't admit the fairies that lived

among roots in the overhang bank weren't real.

And that there weren't any giants

to look out iced-puddle windows in the hill round back.

At sevens and eights Peter went to kick balls.

Me; french skipping and dolls

- never told about fairies or unfinished

But I still say there could be; in the banks

and lanes and hills.

sitting on the stair