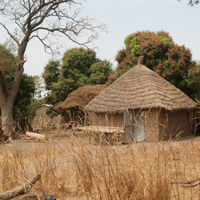 
Head out of your resort, just once, while you're in The Gambia and
cross the Bertil Harding Highway that divides the Westerners in the
resorts from the locals. It's a cliché, of course, but the lives of
the tourists cavorting on the beaches contrast as sharply with those
of the urban poor as the hot tarmac suggests from the air.


Head east and the differences are just as profound.


If there's one thing that irritates me more than anything else, it's
being woken when it's still dark, being expected to shave and have my
breakfast in an unreasonable time, finish my coffee while it's still
hot enough to scald, then realise I've forgotten something last-minute
and have to run back to my hotel room to get it and finally have to
make cheerful conversation with strangers at the start of a long
journey.


Fair enough. That's more than one thing. If it weren't for the fact
that we were travelling with Bob and Sue, I'd have been in a foul
mood, but I rather liked Bob and Sue and wasn't keen on upsetting them
on the first day.


We couldn't afford to go upcountry on our own, so we'd agreed to
travel with Bob and Sue, despite the fact that we'd never met them.
Splitting the cost meant that we wouldn't have to spend all our time
in the resorts, so I took responsibility and told our guide that we'd
be happy based on his assessment that 'you'll like them'. It turned
out to be a rather astute comment.


Two days before we left, I popped into the guides' office for a chat
with Ebrima, and he told me that Bob and Sue were fishing by the Kotu
Bridge if we wanted to meet them. Our first conversation told me all
I needed to know.

'Aye, couple of tiddlers. So you're coming up country with us, eh?'

'Oh, that's alright, then. Only we like to chuff away, and some don't
like it. Right, we'll see you Friday...'

I thought that anyone whose first concern was not whether their
travelling companions were drunks, fascists or sexual deviants, but
whether they were smokers or not, had to be fairly laid-back.


The sun was just thinking about rising when we set off, and I was
quite pleased to be offered the front seat next to Ebrima until I sat
down and saw why. A huge crack almost split the windscreen in half on
my side, and the slightest of accidents would have resulted in my
horrible decapitation. Still, I had a great view.


Tendaba is only about - and it's anyone's guess on Gambian roads - 120
or so miles away from the Kombos, but it takes an astonishingly long
time to get there. It's about the same distance to my Mum's, and that
takes me 2½ hours; exactly right if you remember to add on 50%
to each minute of travelling time spent in Devon. It was quite a
surprise as we headed south to find that we'd be spending almost eight
hours on the road before we arrived.


In the west, we tend to forget that roads are only generally built to
ease, not the flow of people, but the flow of money. In poorer
countries, roads only exist where there is money to support them;
infrastructure costs a lot to build and maintain, so they only tend to
be built where their existence provides a net gain for the government.
There's little point in building a trade route if traders aren't
going to use it. So the north-south highway is superb and provides
great access for traders moving either way into Senegal; try to swing
east towards the poorest rural populations and you soon hit
trouble.


Ten miles or so after leaving Brikama, the road turns pretty shoddy.
It's hard to know which is worse; the sections that consist of dust
alone, or those tarmacked bits that are pockmarked like a lunar
strike. There have been attempts to pave bits of the road, and they
frequently pop up in the middle of nowhere, miles away from anywhere
and utterly, utterly pointless. The further east you go, the worse it
gets. Where the road consists of red dust, it gets everywhere; it
gets in your eyes, your ears and streams from your protesting nose.
The tarmacked sections provide a whole new set of challenges. Barely
maintained, holes large and small open up in rain and baking heat, and
potholes a foot deep look like the abyss when your driver is teetering
on the edge of three of them. As you're negotiating all this, lorries
and bush taxis with more regard for time than safety steam past,
giving you the odd impression that you've been overtaken by all four
Horsemen of the Apocalypse at once. As if all this isn't enough, the
police stop you at every opportunity to try to extort bribes, and the
roads are worst of all through villages where kids see the
toubabs in the wagon and run over to chase you for pens and
sweets, a mere slip from the back wheels. The villages themselves
begin to look like those Bronze Age reconstructions you see popping up
all over the UK, the heat becomes dry and intense, and you begin to
feel like someone is gently scouring your throat with wire wool.


Lainey sat in the back, quietly watching everything going on, being
bounced around and coated in dust, and cursed me, knowing I wasn't
going through the same trials as everyone else. And in truth, I
wasn't.


This really was a Big Adventure, and if I ever doubted the seriousness
of it I only had to look at the rattling, razor-sharp bit of
windscreen flapping in front of me for confirmation. If I'd been able
to hop on a tourist bus and go to Tendaba on a day trip, it wouldn't
have registered as an experience; I'd have gone and taken a look and
been nonplussed by the whole thing. Maybe it's just a kind of
inverted snobbery, I don't know. I just love to travel, and tasting
the red dust made it seem far more real that if I'd been staring at it
from a nicely air-conditioned environment.


It took us all day, but eventually - aching and battered - we got to
Tendaba.