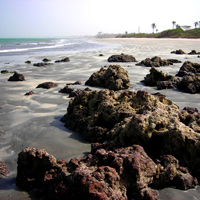 They call us 'crocodiles'. It's quite a cute name, when you think about it; it comes from our habit of lying in the sun all day, occasionally slipping into some nice cold water in order to cool off.

We call them rip-off merchants, con-men, scammers, sharks, touts, fleecers, swindlers and hustlers. These are rather less pleasant names.

We'll call them 'bumsters' in this article. It's a bit of a misnomer; Gambians use it to refer to a particular type of tout, which we'll come to in a moment, and none would ever admit to being one. In fact, it's best to use the term carefully when talking with Gambians, as it can cause offence, but Europeans use it regularly to describe the sort of people who come up to you outside your hotel and around the resorts, trying to make a bit of money.

It's quite easy to be paranoid. The first time you leave your hotel, your pasty-white skin marks you out as a new arrival, and within a few yards someone will be in your ear. In fact, before you even have the opportunity to leave your hotel, you'll probably be warned by your rep to watch out for the 'boys'. This is not necessarily misplaced advice. Some people do get put off by the constant attention and adopt a siege mentality, and some never return to The Gambia after their first visit. Yet this is partly deliberate on the part of the holiday companies, who prefer their guests to stay inside their hotels to spend their money than to go outside with their hard currency. It actually serves their interests to put warnings in their literature such as the one that stared back at us from the page on our first visit:

The boys are waiting outside, and they know it's your first night in town...

To give this a little perspective, the average Gambian earns around $200 per year. By comparison, any European is fairly wealthy, particularly those who can hop on a plane and head to Africa for a fortnight. Add in the fact that the climate is only tourist-friendly between October and March, and you'll realise that you can expect a bit of attention as you walk around with your expensive camera gear.

So who are the bumsters, and what do they want? Well, the 'true' bumster wants to help you enjoy The Gambia by guiding you around and arranging taxis for you, and will invariably expect a little 'present' at the end of your stay. In fact, many want more; the slightly seedier underside of bumstering involves attaching themselves to middle-aged, single Europeans – perhaps surprisingly, usually female – and prostituting themselves in exchange for money or an invitation to the host's home country. It is not uncommon to see.

Most bumsters – moving on to the looser definition that most Gambians would object to - are much more small-time. They're the people trying to sell you goods at over-inflated prices on the beach or asking for money to help replace a broken drumskin. One well-known Kotu bumster claims to be schoolteacher collecting for the local school, when in fact he retired a decade ago. Wise travellers will be aware of the scams, but many are caught out – and it is little wonder that local traders and touts resent being labelled as bumsters.

The truth is that most of the people who approach you outside the hotel are trying to earn an honest living, though this may be hard to believe at times. Shall we meet some of them?

Now tell me: is the fear justified?

The overwhelming majority of bumsters you meet are not really bumsters at all, and most are trying to make a living honestly. The mortal fear that many tourists have is that they will get ripped off for a couple of pounds – yet they are quite happy to walk in Spain among dubious timeshare salesmen, soon to be revealed on Watchdog for fleecing elderly couples of their life savings. I find it very difficult to understand a tourist who shuts himself off from all interaction with locals once he has left the hotel. And for what? Not even to save a few pounds, but to shelter himself from the risk of losing a few pounds.

The people I mention above are just some of the people we met in The Gambia and made friends with2. In fact, we met them all the first time we went in 2007, and had a mini-reunion with a pot of attaya when we returned this year. We met up with Fatou's family again and met her newborn niece, travelled around the country with Ebrima, taught Sanneh how to play pool properly and spent an inordinate amount of time relaxing with the juice-sellers on the beach.

The Gambians are incredible people. In the face of often extreme poverty, they are overwhelmingly fun, welcoming and generous. If you ever go, do open up and have a chat once in a while. You might start out as a crocodile, but it's much nicer to be an honorary Gambian.

1At the time of writing, 42 dalasis were equivalent to £1 sterling.2All have given me permission to use their real names.