And so to the final round. Donington Park, the home of British Motorcycle Racing.

The team all pitched up at the circuit on the Saturday afternoon and set about reacquainting themselves with each other as well as with the bike. The riders were to be the same as the last race, and the whole team were on a high due to the massive steps forward at Snetterton. Also we had Gresham back to run the pit garage, so a least we had someone working on the bike that knew it inside out. Saturday evening was spent tweaking the bike and making it ready to go out and race.

Neither Pete nor Chris had ridden this circuit before, so we were slightly concerned about how we would do in qualifying as well as setting the bike up. Pete went out first, followed by Chris and then Alan. After some suspension adjustments, Pete took it back out for the last session and posted a 1:15 to put us in pole position in the 750cc class. Overall, he was sixth fastest against the 1000cc race bikes.

We decided that the tyres we qualified on wouldn't last more than two hours so a medium front and hard rear slick was chosen for the race. Minor adjustments were then made to the suspension set up and the bike was ready to go. 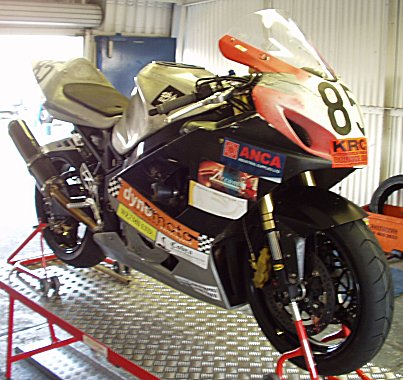 Gooooooooo!
The traditional LeMans start signalled Alan to take the first stint, and after a few laps he settled into his regular race pace of 1:18's.

Uprite were in second place, just 58 seconds down on the reigning
champions, Team Jock. Maximum time allowed on the bike is 70 minutes, and Alan pitted after 68 when called in by the pit crew.

A rapid re-fuel and Pete shot off in hot pursuit of Team Jock, also to put some distance between us and third placed Thistle Endurance, the Championship leaders.

Half an hour into his session he managed to claw back the time, and as Team Jock pitted for a fuel stop, we took the lead!

Pete stayed out for his full session and, by the time he came back in, he had a two lap lead over second place, and three laps over third. Chris jumped on the bike and set off with the sole intention of keeping us in the lead.

As the hour approached, with Chris still in the lead, he signalled the pit wall that he was having tyre problems.

Max left Chris out there to circulate for another two laps while the tyres and crew were lined up for a double wheel change. The new pit crew had had no practice time to do a quick change so this was going to be crucial to our final result.

Chris came in and immediately the crew set about the bike. Rear wheel change was reasonably slick as was the front. Total time from entering the pits to leaving, including both wheels and 22 litre re-fuel was 3:38seconds, not bad for a new pit crew. They know they have a target to halve that time and, over the winter, they intend to be practicing to get it down to sub 1:30. Nevertheless, a fine job, when you watch some of the other pit crews some of them are a hell of lot slower than that.

The tyres were totally knackered, Chris had done well to be able to ride them for the last few laps and keep us in first place.

Alan raced out of the pit lane in pursuit of Team Jock, who had marginally taken the lead.

Alan was just 1:10 behind first place, and forty seconds ahead of third, when the pace car came out.

He was due to pit and we had no option but to bring him in and refuel and then wait at the end of the pit lane for the pace car and the race pack to come back round again. Effectively a whole lap had been lost on the road, as you cannot rejoin the race until the pack comes back around.

Chris rejoined the race with us still in second place, but now two laps down on Team Jock in first, and only half a lap in front of third-placed Thistle Endurance.

Chris held position once again as the pace car came in and out again and finally Chris was called in to hand the bike over to Pete for the last session.

Chris had kept the team in second place and now it was down to Pete to
chase down first position. Team Jock were two laps ahead of us and unless they had to pit with a problem then it would be impossible to catch them on the track. Pete turned up the pressure in the hope that Team Jock would make a mistake, but they replied with their fastest lap during this session. Whatever Pete did, Team Jock seemed to match.

Meanwhile the gap between third place and us had gone from 40 seconds to over five minutes as Thistle backed off, secure in the knowledge that they had won the championship and both Uprite and
Team Jock were riding at a really fast pace.

With the race almost over, the P2 was posted on the pit board for Pete so that he knew to back off and bring the bike home in one piece. The chequered flag was waved as Pete crossed the finish line to a cheering pit wall full of pit crew, time keepers, sponsors, supporters, family and very proud team managers Gresham and Max.

The pictures were taken in Parc Ferme and beer was drunk/sprayed by all involved and as the trophies were presented, more beer was consumed as the team celebrated our best result in two seasons. Next time? First place? We were sooooooo close.

We had completed 255 laps of Donington Park and after six hours were just two and a half minutes behind 1st place and the 2003 champions. A
magnificent effort by all involved.

After the disappointments and setbacks of the early part of the season, this was a brilliant way to finish and to show everyone what we are capable of. We now have settled pit crew and riders and the early
teething problems of the bike have been ironed out. All we need now is for the finances to continue.

Gresham and Max are forever grateful to all our sponsors but especially to Dan at Anca, Rob at Zircom, Kevin at Dyno Moto, Dave at Pegasus and Big Dave at V&J superbikes. Without their help, none of this would have been possible. 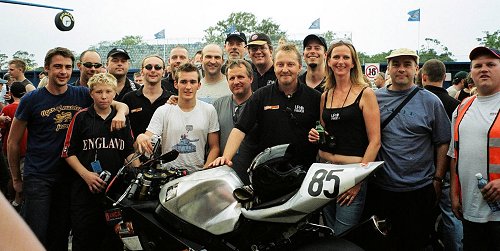