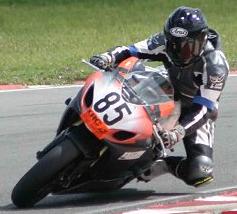 During the previous race, our lovely new bike had been extensively damaged when Simon crashed at over 135mph. The bike had a bent frame, forks, subframe and tank. The race was on to repair the bike in time.

Gresh, who normally prepares the bike, was in Australia, leaving Max to co-ordinate it all. The bike was finally finished two days before the race, and both Max and Gresham would like to thank Jez and Kevin at our sponsors DynoMoto for pulling out all the stops to get the bike ready.

We were also a rider down, as Simon would be out for the rest of the season due to the crash at Pembrey. Enter Pete Spalding. The team had been in contact with him earlier in the season and now that he had his seventeenth birthday a few weeks behind him as well as his national racing licence, he was now available to ride for the team.

We also had a lack of mechanics. Gresh was in Australia, Jez was on Holiday and Phil had to work. Enter long time friend of the team and sponsor Triff from Cobra Engineering to help out with Andy. Pete's dad Mike, who thought that he would only be there to take some photos over the weekend, was also roped into doing some spannering.

The other two riders would be our regular rider, Chris, and Alan who had made his Uprite debut at Pembrey the previous month. This race was going to be an eight-hour event, two hours longer than usual, and none of the riders had done this length of race before.

After setting up, the three riders settled into good morning session whilst just tweaking the suspension here and there. The brakes were a cause for concern as they seemed to be fading, but overall the riders were getting more and more used to the bike.

Late afternoon saw the lads better their morning times as Triff, Mike, Andy and Max made more adjustments to the bike. Then Pete took the bike out and had a spill as the brakes faded completely. Luckily he was unhurt but the bike needed some repairs. A patched up fairing was placed on the bike (to our sponsors, we apologise, as we didn't have another fairing with your logos on. Sorry, it won't happen again).

The brakes were stripped down and new levers and foot pegs were added. The bike was sorted for racing. Or so we thought! 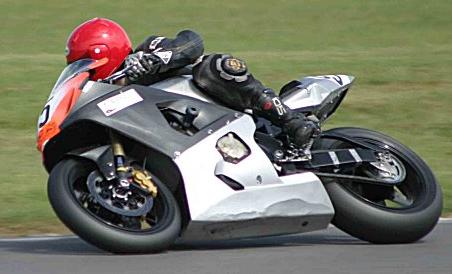 The bike was fuelled up and Pete took it out first. As he bike came past the pit wall, the crew noticed a smoke trail from the rear end of the bike.

Pete pitted and the cause was discovered to be an oversized rear slick rubbing on the swinging arm. The rear sprockets were changed so that the wheel could be moved back, and Alan took the bike out followed by Chris. The brakes were still fading after the strip down. Again they were bled through and Triff crossed his fingers that the problem was now behind us as Pete took it out for the final qualifying session.

With the brakes and tyres thankfully sorted, Pete put the bike on Pole position for the 750cc class, our first ever pole. Big smiles all round from both riders and pit crew, but especially from Max.

Alan started and settled down into a steady rhythm. With no incidents to speak of, the pit crew relaxed whilst Alan did the business on the track. At the end of the hour we were lying in third place in our 750cc class.

Pete took over after a slick fuel stop and started banging in some fast but steady laps. Max decided to run Pete a little longer than usual to gain a slight advantage over our rivals.

The hour came and went, and Pete was still out there putting in consistent laps. While other teams pitted for fuel, Uprite not only took the lead in our class but also moved into 2nd overall of the three classes, beating 1000cc GSXR's and R1's.

Pete eventually came in for fuel and Chris went out do his stint. All was going well with Chris going quicker and quicker until another rider indicated to Chris that there was something wrong with the bike.

Chris came back in and we saw that the exhaust silencer was hanging off, having been slightly damaged in Saturday's crash and which had now worked itself loose.

Alan managed to blag one off another team (whoever you are, thanks. See Max at Donnington for the money!). Whilst in the pits we also changed both tyres, losing a total of nine laps in the process.

When the bike was ready, Alan took over again as the sun beat down on the track making it a very tiring session not only for the riders but also for pit crew and the timekeepers. The team had slipped down to fourth place because of the exhaust problem, so Alan had to try and haul us back up the order.

The hour came and went as Alan continued to cut into the time difference between Uprite and third place whilst fending off Jebbster Racing in fifth place.

Alan came in for a pit stop, but again lady luck was not with us as the brake pads were worn out. As none of the usual pit crew was there, it took over six minutes in this stop to refuel and change the pads.

We had lost almost five laps.

Pete remounted and set off in hot pursuit of the teams in front of us. Despite our unscheduled pit stops, we were still running in 5th place.

Chris took over and continued to chip away at the opposition, putting in consistent laps as instructed.

Meanwhile Max and Triff were plotting tactics in the pits. The decision was made to run the slicks all the way to the end of the race and not change again. The slower lap times would still be better than pitting again.

Alan went out for his final session with the team, one lap down on fourth place. He closed in on the opposition and when he pitted for fuel at the end of his hour, he had brought the team into fourth place, and only six laps off third place.

Nevertheless, Pete stuck in a few 1.13's just in case, causing Mike to go grey at the thought of those tyres losing grip as they were now into their fifth hour. The team also had overall championship points and were lying twelfth in all classes against the 1000cc's.

With only twenty minutes to go, Chris had climbed out of his leathers ready to relax. Max asked Alan if he’d keep his on, just in case something happened...

And it did. As Pete entered a corner before the start finish straight, a Coyote Racing rider in front who was having brake problems sat their bike up and then suddenly chopped in front and caught Pete's handlebar. The bike was down, but in view of the timekeepers, who got Alan to run the 250m from the pit lane to get the bike. He brought it in before the pace car had even done a second lap. Max ripped off the broken screen with his bare hands, Andy got a scaffold pole on the bent gear lever whilst Triff checked the bike out. From crashing to Alan getting out again was just over five minutes. The pit crew deserved a beer for that one!

Alan rejoined the race and we had not lost our fourth place, we were still in the championship points. With no screen and a flapping faring, he still managed to get within three seconds of his usual lap times. Star rider for the effort. Meanwhile Pete was back in the pits totally gutted at the fact he was taken out by another bike so close to taking the flag.

The chequered flag was shown at 7pm, and the whole team stood on the pit wall waving and cheering as Alan rode by. This was the first time we had finished this season with some decent points and no terminal crashes or illnesses.

With this result behind the team, we can only move on to better things.

The race result would have been even better were it not for exhaust and brake pads, and the team should have taken a trophy home this weekend.

One more round to go at Donnington Park in three weeks time and the team are on a real high going into it.