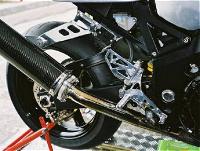 Gresham had been furiously preparing the new bike right up to the hour before the team truck left for Ireland, but it was now ready, and we set off with great expectations. It was during this journey that the first piece in the jigsaw became unstuck. One of our riders, Colm, couldn't make the race due to a serious accident to his partner Michelle, who had been rushed to hospital.

We quickly phoned around a few riders that we knew in the UK but none were available or had an Irish extension to their ACU licences. So, then, we were facing a 6-hour race with two riders: not unheard of, definitely possible, but we suspected that Gresham and Max would get a chiropractor invoice from the two riders at the end of the race.

The sun was shining with a slight breeze; it looked like the team would be racing in the dry for the first time since July last year. The pits were all set with all the new equipment that our sponsors had enabled us to purchase. The bike was fully fettled; the teams were ready to do battle.

Then the bombshell: our rider Simon arrived at the circuit looking like death warmed up. He had been up all night with severe d&v and was in no fit state to race.

We decided with Simon that we would race anyway and he would do the absolute minimum. The pressure was now on Chris. Qualification went fine with both riders told to go out and circulate and not to press for anything. They had to keep up their reserves, especially Simon who kept on disappearing to the toilet in haste. 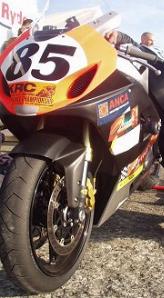 The bike went out with Chris on-board to start the race and he was caught up with ten other riders at the end of the pit lane. Due to a marshal unsure of regulations we had to start from the pit lane rather than the normal Le Mans start. This was of no consequence to us today as the team was out to salvage points and a quick start was not the most important thing to us.

Chris left the pit lane and joined the race and settled down to a constant rhythm. Simon, meanwhile was still very ill, and the team was concerned for him. Elsewhere Chris was picking up the pace and had moved the bike up three places.

On lap 34 at turn 10, just before the start finish straight, Chris was trying to stuff the bike up the inside of another competitor when the front wheel hit a bump off the racing line and dumped him and the bike on the outside of the track. He picked the bike up and restarted it for the short ride into the pits.

The bike had sustained very little damage. A first for the team! When we crash we usually do a terminal one... The mechanics had meticulously prepared the bike and a crash like this really shows the benefit of forethought. The only thing that needed replacing was a footrest, which was soon done, and although we were near the hour mark we wanted Chris to continue out for as long as possible.

The hour came but Chris pitted with something wrong with the bike, which was running on only three cylinders. The mechanics swooped, tore off the bodywork, put it back together, and stood back as a rather ashen faced Simon mounted the bike.

One lap later he was back. The bike still had problems with firing on three out of four cylinders. Again the mechanics set upon the bike and this time the fault was traced to the power commander which was connected to the ECU and the fuel injectors. This was disconnected and a total of 24 minutes had been lost in the pits. Simon remounted, still ill, and set off. Within two laps he had posted his fastest time. Max and Gresham would leave Simon out for as short a time as possible.

Simon pitted and collapsed into a chair in the garage. Chris rejoined the race and we tried to help Simon, who was clearly suffering badly.

Three laps later the race was stopped for over forty minutes due to a serious accident. The team had time to chat to Chris and he was grateful of the rest. The regulations state that no rider can be on the bike for more than 70 mins and that there must be a minimum of 30 mins before that rider can rejoin the race, so we were running Chris at the maximum time and Simon at the minimum.

Halfway point was spent on the start finish straight whilst an injured rider was taken to hospital and, at two minutes past the hour, the race restarted. Chris stayed out another 20 mins and then he brought the bike in for Simon.

Simon had now deteriorated. He was under strict instructions to not push the bike hard. In fact the team had given him the option not to ride at all, but he felt he would be ok to do 30 mins. Just before the hour he pitted and Chris again swung his leg over the bike for another 70 mins on the bike.

Simon, meanwhile, was in his chair in much pain. The bumpy surface was aggravating his stomach and he was in no fit state to race any more. Max and Gresham decided that rider safety was more important than the race and he would take no further part in the race. Simon was glad as he felt he wasn't capable of racing again either.

Chris held our position and, due to our lengthy pit stops and other teams' crashes, we were in ninth place, but the team behind us was more than forty minutes behind and so we couldn't lose a place in the half an hour while Chris took a mandatory break.

The hour mark passed with the bike in the pit lane and Chris rehydrating. He had never before raced for so long in one day. At 17.20 he mounted the bike for one final session; his pace slowed a little, which was to be expected, but we had time to spare.

The end of the race came and the whole team stood on the pit wall applauding Chris who had completed over 150 laps during the day. The team was glad to complete a race and we had some points in the bag with a 9th place.