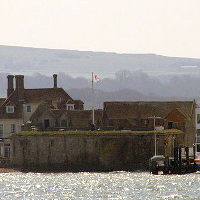 When King Henry VIII left the Catholic church in 1538, there was, in Britain, a very serious threat of invasion. Francis I of France and Emperor Charles V of Spain signed a treaty, and the Pope encouraged both nations to invade and
attack. Although internal matters in both nations prevented them from invading straight away, the threat remained. So in the 1540s, an extensive campaign to fortify England was begun, with many of these forts on or around the Isle of Wight.

In 1497, the first Drydock in Britain had been built in Portsmouth, and this made it the home of the Royal Navy. It also made it one of the prime targets for invasion, and Henry VIII's strategy was to defend all harbours, and to deny the enemy any harbour or anchorage that could be used to establish a base from which to organise a more serious assault. Four castles were built on the Isle of Wight; Sandown, East Cowes Castle, West Cowes Castle, and Yarmouth, with Sharpenode blockhouse built over the Needles Passage. On the Mainland near the Isle of Wight, Hurst Castle, Calshot Castle, Southsea Castle, Netley Castle and St. Andrew's Point blockhouse were built to support this.

Not to be confused with Sandown Castle in Deal, Sandown Castle, Isle of Wight, was built between Sandown and Yaverland on the Isle of Wight. Sandown Castle was built to defend the only bay on the southern side of the Island where a fleet could succesfully land. Sandown Castle's design was simply that of a square, with two squares in the corners, and was started in 1544. It was still being built during the French invasion on 1545 - when the Mary Rose was sank, and French invaders reportedly fought defenders over the foundations of the castle. However, the castle was built too near the sea, and by the 1580s was unusable, and was abandoned. It has since been eroded by the sea, and the
remains of it can sometimes be seen as a pile of rocks on low tide, opposite Fort Street, a road named after it.

In 1540, the Earl of Southampton took a boat into the Solent to note where the wind and tide influenced ships, and from this determined the sites of Calshot and East and West Cowes Castles. East Cowes Castle was abandoned only seven years after it was finished, and no longer exists. West Cowes castle - a round tower with short, single storey rectangular wings to the east and west, forming a D to the front with a rectangular walled ditch to the back - is now part of the Royal Yacht Squadron clubhouse, and is visible on the promenade.

On the West side of the island, the Needles Passage was also defended. Mainly by Hurst Castle on the mainland, built on a shingle spit that extends into the middle of the Solent. It was one of the biggest castles of its time, with it
being a twelve-sided tower with three half-round bastions projecting beyond salient angles of the curtain wall. On the Isle of Wight, the Passage was defended by the existing Worsley's Tower, built in the 1520s, which had a squat, octagonal structure and was described by the Earl of Southampton as "one of the worst devised things he'd ever seen." Sharpenode blockhouse was also built to defend it, and that was a square with two acutely angled triangular
salients at either corner of the landward side.

Yarmouth Castle was built to defend the port of Yarmouth on the Isle of Wight, and originally was built as a square, walled enclosure surrounded by a ditch, with a triangular angle bastion on the south-eastern corner. It was expanded in
the 1560s, but it is the earliest surviving angle-bastioned fortification in the British Isles1.

Southsea Castle was built to defend Portsmouth and the surrounding area, and has a square keep with two expanded gun platforms on either side of the keep, extending from the corners. It was built in 1544, and commanded the channel between Spit Sand and Portsea.

1It is open to the public most days.