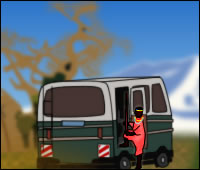 This trip stems from a promise that El (my better half) and I had made to ourselves - when her exams were over we would take off for a while, travel the world, have a little fun. The aim was to do a wide variety of stuff – some touristy things, some mountains, see some friends and family. Most of this journal dates from notes I took in the evening - I have allowed hindsight to creep in in some places though...

Our taxi, perhaps predictably, arrives late and we board the luxury Kampala to Dar bus at the last possible moment. It's called Scandinavian bus - no sign of any blond Olafs around, so maybe the name is a testament to the fabled efficiency of our northern neighbours? The coach is fairly comfortable really - you get a film, biscuits and water at various stages in the 8 hour journey. Aside from a handful of tourists, the bus is full of locals. Embarrasingly, my heavy bag falls from the rack onto a sleeping lady. This has happened to me on two occasions, and I know it's not a pleasant experience. We arrive in Dar in the afternoon and quickly feel the temperature difference. It's got a big city bustle to it, with traffic jams and noise.

We also notice the change in dominant religion. The women are not covered from head to toe, but finding a cold beer proves tricky. A short amble from the hotel in the evening demonstrates that street signs and lighting are not Dar's strong points, so we cut the tour short and head for the first open restaurant. Tasty lassi nearly makes up for the total absence of beer.

By 9:30, when we head out, it's already hot on the streets of Dar. Not so many touts here, but a few unlicenced money changers furtively show us small bits of card with their rates on. We privilege the shady side of the street as we walk around the crowded pavements. Dar hasn't got a lot of architectural character but the odd colonial era building or Arab influence stands out amongst concrete mediocrity.

We go to the National museum on the grounds that it's cheap and in a nice area. The museum is currently hosting an exhibition of AIDS related photos, useful in a country where 1.5 million out of a population of 30 million are estimated to be HIV+. Some of the permanent collection is a little dusty and the fish in the biology section look like they are about gasp their last. The history section is better but with little on independence and virtually nothing on Tanzania's experiment with African socialism and 'Ujamma'. Perhaps still too recent?

Feeling confident now, we ignore the bit in the Lonely Planet about not walking on the road by the Indian Ocean. The thrill of breaking an interdiction and all that - it is a little isolated, but worth the risk for the colour of the sea and the dhows sailing tranquilly across the natural harbour. We pass by the fish market on the way out - the little kids there hassle us for a while but go away when shooed off.

The plan for the afternoon is to visit the Tsinga-Tsinga centre, on the Msasani peninsula. The centre is named after the local painter who invented the eponymous distinctive style of painting - wide eyed, bright colours, oil on cotton and a lot of detail. The place is a real treat. There must be 50 painters in and around the centre. Indeed, much of the more imaginative work is being done outside the centre itself, leaving the standard cute hippos and elongated Masai behind, to deal with more contemporary or alternative themes. We buy three big paintings for £50 total - one a village scene, one a surrealist/Hieronymous Bosch style depiction of a witch doctor's hut and dreams and one painting of a modern fish market.

On the way out we meet some African street artists/comedians who proceed (I guess) to take the piss out of us. Both artists are dressed as fat men - one presents himself as Mr Nika Nika - this causes gales of hilarity among the crowd that has assembled. They have blackened their faces and are carrying foam batons. We don't really get the references but it seems good natured enough.

We arrive bright and early at the port. It's Sunday, so the streets are very quiet but the port is (and I expect it always is) manic. The first boat is already full as we get there so we get a couple of hours to observe port life in action. Peanut sellers jostle for space with a few pathetic ticket touts. 'You can give us cheap tickets as part of a group?' – Yeah right.

Every possible ethnic grouping seems to be represented. Muslim men in blue and white hats, round and flat, one chap with a fez, a couple of Masai, women from the interior in brightly coloured kangas and others in black shawls.

When we finally get on the boat we meet a nice French couple. They have been doing the full budget experience, not always easy for a lot of what Tanzania has to offer. To our surprise, the boat develops a distinct rolling motion for the first 30 minutes of the trip - perhaps because it's a catamaran? Lying on the floor helps keep breakfast down. Quite a few of the locals are looking queasy, and black plastic bags are handed round, but not, luckily, used.

On the ship's TV we are treated to, in succession, 45 minutes of a man chanting surats of the Koran to an appreciative audience whilst swaying and occasionally looking like he's going to keel over, 10 minutes of CNN and an hour of the worst sub-Rambo film you've ever seen. It comes complete with flashbacks to the hero's ju-jitsu apprenticeship in Japan, a fight in a bar, a torture scene with a sadistic Hispanic torturer, a buddy relationship and many forms of small arms and unarmed combat.

After we arrive we are immediately struck by the relaxed nature of Zanzibar. After finding a hotel, we get lost and unlost, coming across a mosque, a school, a little beach and many of the brass studded doors for which Zanzibar is justly famous. We'd been hearing about possible tensions between mainland and island and even eventual Islamist attacks but we felt in total security on the island, before and after dark. The one exception to this is the possibility of being knocked over by a cyclist or a moped as they zoom through the narrow streets. At one point I end up eyeball to eyeball with a cyclist, fortunately one with good brakes.

At night we stroll through the Forodhani Gardens, meeting point par excellence for Zanzibaris and tourists alike. We chat with a young guide who would like to sell us a tour. We tell him that we've already booked a spice tour with Mr Muti, the famous guide mentioned in the Lonely Planet no less. His reply is simple enough, but gives food for thought.

'Mr Muti is very rich - why don't you come with me?' Good question in fact - the main reason being that we don't know whether he's any good or not. There doesn't seem to be much of a certification scheme in place so if you take a guide off the streets you run the risk of paying for a crap time. It's a shame, because everyone has to start somewhere. The second chap we get chatting to is a manic street vendor. He comes from Mto wa Mbu but came to Zanzibar to sell curios after, in his words:

'I killed an antelope - I thought I was a man - I drank gombo and smoked a lot - I upset my mama.'

Between that and the chronic malaria he did indeed seem slightly unstable but swore that he was keen to give up the drinking and return home to get married and be a hunter again.

Time Out in Africa Archive