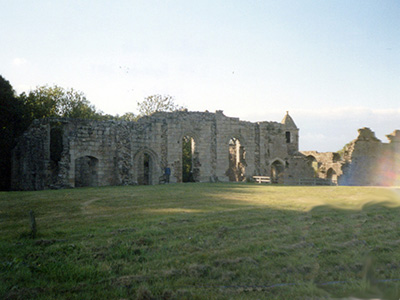 Spofforth Castle, midway between Harrogate and Wetherby, is the remains of a fortified hall that was built on the site of a medieval castle.

The basement was originally rib-vaulted, and is slightly narrower than the floor above. Most of it is a cellar, but there are two private rooms on the North side as well as a partition dividing the hall from the furthest south end of the hall. Half-way along the castle's East wall in the main hall is a flight of stairs leading outside of the building altogether.

The ground floor above is mainly taken up by the hall, although there are again two rooms in the North side. One of these is believed to have been a chapel, whilst the other was probably used as a solar. The remains of a fireplace can still be seen in the North wall, whilst a latrine exists on the East side.

The most distinguishing feature of the castle is an octagonal tower on the castle's North-East side that contained a spiral staircase between the two floors.

William de Percy was granted five estates in Yorkshire by William the Bastard after the Norman Conquest, and built a wooden manor on the castle site.

Although the original Percy line died out in the late 13th Century, the last Percy heir, Agnes, married Josceline de Louain, Duke of Brabant. One of the conditions of the marriage was the adoption of the Percy name.

In 1309 their son Henry de Percy built the first castle after getting a licence to crenallate from Edward II in 1308. Soon after work was begun Henry purchased Alnwick in Northumberland from Anthony Bek, Bishop of Durham, and so his work on Spofforth was never fully developed.

In 1377 Henry 4th Baron Percy of Alnwick was created Earl of Northumberland. His son, Henry Hotspur, is believed to have been born at Spofforth Castle. They led a rebellion against Henry IV1 in 1403.
Henry Hotspur lost at the battle of Shrewsbury, and Henry, Earl of
Northumberland lost at the battle of Bramham Moor. These events are described in Shakespeare's Henry IV: parts I and II.

After the rebellion, their Yorkshire lands were given to the Sheriff of Yorkshire, Sir Thomas Rokeby. On his death the Percy family regained Spofforth Castle.

During the Wars of the Roses the Percy family supported the House of Lancaster. Henry Percy, 3rd Earl of Northumberland and his brother Richard were both killed at the Battle of Towton less than 20 miles away, as well as Spofforth Castle's steward, Sir William Plumpton. Richard Neville, Earl of Warwick "The Kingmaker" of Middleham Castle, was given the castle. As the Neville's had been the Percy's rivals in the North of England, both of whom were old, powerful families, Warwick had Spofforth Castle destroyed.

In 1470 the Percies were allowed to regain Spofforth Castle, although it was not until 1559 that another Henry Percy was given a new licence to crenellate.

By 1600 the new hall, which is what remains today, was abandoned by the Percy family and given to the castle's steward in 1600. In 1604 the steward died and the castle was allowed to decay. Although it was not fortified, the castle was vandalised by Parliamentarian troops. It has been allowed to decay since then, until it and its grounds were recently bought by the people of Spofforth for use as a public park.

1Who had been Henry Bolingbroke of Pontefract and Pickering Castles and had usurped the throne from his cousin Richard II, whom he had murdered at Pontefract Castle.