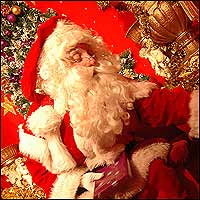 Ye Editors have suggested that, what with the festive season almost upon us, the great Post readership (this means you) might be interested in hearing about what form the holiday takes here in Japan. There is indeed a fascinating and illuminating article just waiting to be written on this subject, but until someone does so, we'll just have to make do with what I can cobble together1.

It's almost too obvious to be worth saying, but in Europe and most of the English-speaking world Christmas is still ostensibly a Christian festival. This makes the Japanese attitude to it a bit odd at first glance. Christianity's popularity was at its peak in Japan nearly 400 years ago; it was virtually stamped out during the period the country closed itself to the rest of the world. The vast majority of Japanese people are perfectly happy with Buddhism and Shinto, neither of which is strictly a religion comparable to one of the Judaeo-Christian traditions or Hinduism. (Although regrettably enough this does seem to make the local Jehovah's Witnesses even more relentlessly dedicated.)

Most Japanese people don't even know that much about Christianity. They're slightly better informed about it than most Brits are about Shinto, but they're generally vague about what it's about, who founded it, and what the main events of his, er, life were. The cross, as a symbol, has a markedly lower recognition level round here than the golden arches or the shield of Krypton.

And yet they go crazy about Christmas. The decorations festooning every convenience store and shopping centre, the kitsch tat on sale everywhere, all of it is indistinguishable from what I regularly used to see in Britain at this time of year. They even play many of the same Christmas songs, although some hardy UK perennials are unheard of here (Noddy Holder and Slade are obviously too hairy to find a place in the Japanese heart). But they're incredibly fond of Last Christmas by Wham! (George Michael is still massive here) and of course Merry Christmas (War is Over) by John Lennon (Lennon is as close to being adopted as an honorary Japanese as any westerner has managed since the unpleasantness of the 1940s, mainly because of Yoko Ono one suspects). The children here are all familiar with Santa-san (as he is of course referred to), probably due to the tireless efforts of St Nick's PR people at a well-known coca-related drinks company。 On the face of things, it's an anomaly.

But of course, there are telling differences. Christmas Day is not an official national holiday here - for most folk it's just another day at the office. （Don't worry, your correspondent gets a nice long break anyway.) They don't do Boxing Day at all - Xmas is over and done with by midnight on the 25th. And looking more closely at the trappings of the Japanese Christmas, it's just trees, and snowmen, and the odd reindeer, and various other things that you would expect to the well-documented Japanese soft spot for anything cute and slightly bizarre.  There's a distinct lack of angels, stars, shepherds, wise men, or little drummer boys (pa-rup-a-pum-pum). Santa's status as a minor Christian figure (patron saint of prostitutes, pub quiz fans!) is the only connection with the religious element of the festival, and you can bet well over 90% of the population aren't even aware of that. In short, they haven't adopted the Christian elements of Christmas at all, just the older traditions from Saturnalia and the Midwinter Festival which Christianity later assimilated. In other words, it's an almost exclusively commercial enterprise in Japan - and once you understand this, the resemblence to Christmas in the English-speaking world becomes much less surprising.

On a less cynical note, New Year over here is different again. New Year is a genuine religious festival here in Japan, with three million people visiting the Imperial shrine in Tokyo over the holiday (it says in my guide book), hoping for good fortune from the divinities there. This would be the equivalent of over a million British people visiting the same church or cathedral for the Christmas services (only a rough equivalent, but still telling). There's very little point trying to travel, as everyone is heading home to see their family, and the price of tickets skyrockets. Apparently the tradition is to sit round the TV on New Year's Eve watching a big pop concert and eating noodles for good luck and long life. It sounds a bit more wholesome than the British New Year if you ask me. Whoops, cynicism creeps in again...

This of course puts a whole new spin on the 'Christmas is too commercial' complaints I always heard back home. Here, the complaint is not that the commercial elements of the festival are eclipsing the religious aspects, but that an entirely secular holiday (Christmas) is overtaking a genuinely religious one (New Year) in popularity. It's not a debate I feel qualified to have an opinion about, never having made a committment to Shinto, but I find it amusing that the same arguments resurface all over the world with only minor changes.

So there you go: it's Christmas, Jim, but not as we know it. Unlike many of my colleagues I'm staying in Japan over the holiday break. I have no great expectations for the holiday, but if nothing else I will appreciate it more next year, I think. I hope that, if you keep it, you have a good Christmas this year. Gawd bless us, every one!

1Apologies to any Japanese people or expats of longer standing than myself who may be reading this. I can only call it as I see it.