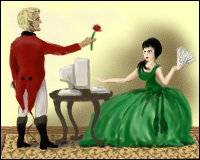 Today is my fourth anniversary on h2g2. I signed up for this amazing site when browsing in September 1999 and, after a great deal of chatting, realised that I liked the site so much that I wanted it. Sadly, I couldn't afford to buy the company; we're not all Victor Kyam you know. So I settled for working here instead, and joined the Community Team in January 2002. I've been extremely happy here since then.

When I realised that the restructuring of New Media meant that the roles on h2g2 would change because the number of Editors was going to change, I began to think about what I enjoyed most about my job, and what I wanted out of my time with the BBC. A career was zooming in on me - I couldn't avoid it any longer.

I've found that the best things in life are free, including h2g2 membership. But my experience of communities is valuable, both as a user and as a bruiser (ahem, I mean as a Researcher and as an Editor), to the BBC. I was recently1 offered a chance to share those skills, to use them in other ways, to help other people across BBCi. I said yes, and yesterday my last hours on h2g2 began.

What I do on a day to day basis isn't going to change that much. I'll still be making sure that everyone has a good time, that everything runs smoothly, and that any queries are answered as soon as possible. But I'll be doing it from the other end of the office, and although there might not be so much time for me to have a cup of

, I'll still be talking to friends old and new. I just won't be doing it as Mina.

I'm not planning to leave h2g2 anytime soon. I'll have to hang onto my Editor status for a while, as things settle down and there's a panic as we realise that I've still got half the documentation needed on my hard drive, and I've forgotten that half a dozen things I was working on need to be finished or passed on, but there will be a time when I switch the lights off. I imagine that it'll be a bit like when the Christmas lights are turned off in the local town centre. A bit of an anti-climax that nobody notices and nobody misses. You can put your hand in the water and do as much splashing around as you like. But when you take your hand out and the ripples are over, it's like you were never there...

But before you all start hoping that the door doesn't hit me in the backside on my way out, remember that I still have a pre-Editor account that's been hanging around, patiently waiting to remind me that work is a fine thing as long as it doesn't take too much of my spare time.

PS I've learned a lot from being on h2g2. It can be summed up thus: Accept that some days you are the pigeon, and some days the statue.