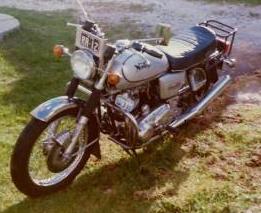 I think the first thing that people wonder is why did he do it, but then people often say I wish I had done something like that.

I spent the next 3 years working in Norwich and considering what I would do next - the trip in Australia was good but what I would have liked to do was to return using a sponsored bike, perhaps on a specified route chosen by the sponsoring company.

The bike arrived in Norwich in March 1977 and I began working on it, fitting new parts in order to get it looking better. It was then that I finally found out why I had so many punctures... This was due to the inner wall of the front tyre being split but it was hard to find as the canvas was intact. Every time the front wheel hit a bump or pothole it pinched the tyre and damaged the inner-tube.

Also during this time I had to get the bike an MoT (Ministry of Transport Test). As I was taking it to the dealers in 1978 I had the cylinder head gasket blow and it started to exhaust though the gasket. The hot air blew near my left leg and it made it hard to ride - it also made quite a noise! The motorcycle dealer removed the cylinder head and barrel and once the cam follower was also removed the problem was easily seen. The left exhaust cam lobe had worn almost round not allowing the valve to lift open. This problem meant a major engine rebuild by a motorcycle shop in Norwich. I used the Norton for some time after that but was not really happy with the work done. 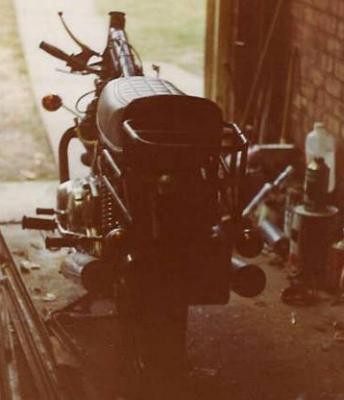 In the mean time I gave the bike a total strip down and checked all parts and, while doing this, I found remains of locusts - I would have not believed they could have been there all this time and this souvenir of Australia got me going again! I really wanted to return for another trip. However I still thought the way to go was to try to get Triumph or somebody to supply a bike. At this time I spoke to Hesketh but, although they were quite interested, they really did not have the financial support to do it. I also wrote to Heron Suzuki, Rickman the frame makers and also Norton but they were no longer manufacturing motorcycles.

Next I wrote to the editor of the Daily Mirror Newspaper and they came up with the idea of using the Norton again and go for parts sponsorship. In the end this was what I did. This time I knew what the bike needed to make it a better trip so I wrote letters to various people and some helped out. I sent loads of letters out and many replies came back saying 'sorry we can not help as our budget is at its limit' but they all wished me good luck.

These companies helped me in the following ways:


I spent a lot of time on the bike getting it how I wanted it - in fact it was better with all the new parts than when it first came out of the factory.

It was now getting near to my next Aussie trip and I tried to organize things but however well you think you have arranged everything, it is inevitable things will go wrong. I was told my flight tickets were OK and the money had arrived at the bank in Sydney so I thought things were going well. However there was a hitch with the bike. The rear wheel fitted OK but there was a problem with the Speedo drive as it was not quite right and had to be returned to the manufacturers. I told them the bike was set to go on at a certain time and they said they would try to get it back to me so I could send it fitted to the bike, but it did not arrive in time so I had to send the Norton with the rear spoked wheels fitted - I actually sent it with one new and one old wheel fitted which made it look interesting. 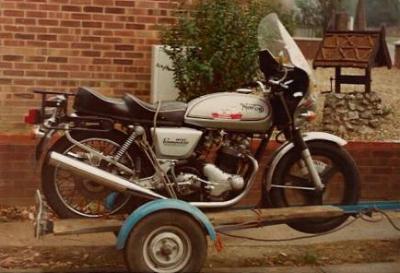 The Norton In Australia Archive