Pablo Picasso's 'Les Demoiselles d'Avignon' Content from the guide to life, the universe and everything 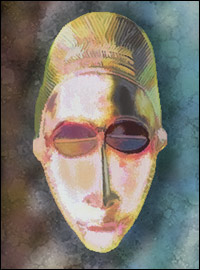 Pablo Picasso was the dominant figure on the early 20th Century art scene, and was, above all, a great innovator. By the age of 20 he had set up a studio in Montmartre, Paris, where he came under the influence of Toulouse-Lautrec, Degas, and other members of the Paris school, but soon began to develop his own style.

In 1906-1907 Picasso painted Les Demoiselles d'Avignon (French for 'The Girls of Avignon'), a work so revolutionary that it constituted a major turning-point for art in Europe1.

Les Demoiselles d'Avignon depicts five naked prostitutes in a brothel. Now painting naked figures was in itself not at all shocking - drawing and painting nudes was one of the best means for artists to demonstrate their skills and abilities. In previous paintings of nude figures, however, there had been no suggestion or intimation of sexuality: the figures were simply unclothed. But in Les Demoiselles d'Avignon the figures were not pictured nude to prove how well Picasso could paint a woman's arm: instead they constituted an overt sexual display. This in itself was profoundly upsetting to a society used to viewing depictions of exalted and idealized historical, mythological and religious subject-matter.

The Elements of Les Demoiselles d'Avignon

Picasso, in addition to cocking a snook at the conventions of subject-matter with this painting, dismissed the existing rules of composition, real-life accuracy and handling of space. This is demonstrated by these aspects of the work:

Add together all of these characteristics, and you have a painting such as none had seen before. In this single work Picasso both incorporated and refuted the artistic ideals of the Renaissance, and set out on a path to an entirely new means of expression in painting.

Les Demoiselles d'Avignon was the first full-blown example of analytical Cubism, an attempt to depict three dimensions without the use of perspective. It is characterised by an emphasis on formal geometrical criteria rather than the use of colour.

Up to the point when he painted Les Demoiselles d'Avignon Picasso had been considered a technical master, and the Paris art community had carefully followed the progress of his career. Although he refrained from showing this work in a gallery or salon until 10 years after its completion, Les Demoiselles d'Avignon sparked off many a heated debate in the Paris art community. Artists, critics and several 'curiosity-seekers' sought out Picasso's hidden studio to view the painting that had all of Paris chattering.

The painting upset many of Picasso's critics and friends, who thought he was throwing away his talent. They couldn't understand what he was doing. At least one critic wrote that Picasso 'must hate women to have created such a picture'. That interpretation is still popular today. Georges Braque, who later became Picasso's closest artistic ally, felt that Les Demoiselles d'Avignon was a 'caustic and bitter use of paint'. Even Picasso's good friend, the writer Gertrude Stein, disagreed with what he was attempting, and cut off contact with him for more than a year.

Yet with all this negative press, Les Demoiselles d'Avignon opened doors for Picasso. Growing tired of conventional painting objectives and techniques, he was to find a new means of artistic expression for the new society in which he was living. From this point forward he pursued his ideas for a new style, and incorporated into this developing style the new handling of space and form that he had first created in Les Demoiselles d'Avignon.

1Picasso considered this an unfinished work, and on the painting you can see areas where he reworked the canvas over and over again.