The National Wagon Road Guide: How to Get to California in 1858 Content from the guide to life, the universe and everything 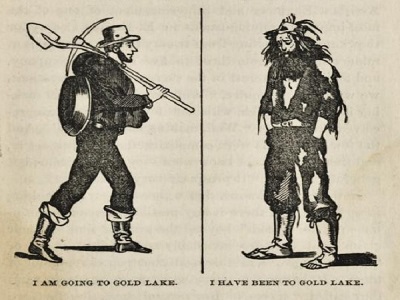 Imagine yourself a young (or youngish) male person who lived in the eastern half of the United States in the year 1858. Perhaps you find your opportunities unexciting. You could go to work in Uncle Henry's dry goods emporium or take a teaching position at the one-room school. You could economise to save up for a small parcel of land to build a modest house and grow a few vegetables.

Or you could pay attention to the newspaper hype and go West. California beckoned invitingly. There was a gold rush going on. Depending on who you talked to, the gold rush was the quick way to become rich or the road to ruin. Still, California was a new state, having been stolen from Mexico in the war ten years before and ceded to the US by the Treaty of Guadalupe Hidalgo1. There was lots of opportunity in California. A man could become a prosperous fruit farmer. He could get in on the ground floor of burgeoning enterprises. He could involve himself in politics and become not only rich, but also influential. And if he could talk a young woman into going with him, he could even become an ancestor.

Of course, the problem was getting there. One way was to board a ship on the US east coast and head south around the southern tip of South America, then back up the western coast of that continent to California. This was expensive, it was dangerous, and it took eight months. There was a shortcut involving an overland trek across the isthmus of Panama. It was a good way to catch your death of jungle fever or be killed by hostile locals. So most would-be Californians settled for the overland route, which required a wagon and some horses or oxen. This route, too, had its dangers. And you needed a good map.

There was a lot to know about 'going West'. A good guidebook would help. In 1858, a man named William Wadsworth published one. It's full of handy tips and vivid illustrations intended to aid the would-be settler. Call it the Hitchhiker's Guide to Western Expansion.

How to Go West: A Beginner's Guide

There are those who speak of making the passage of the plains a pleasure trip, from beginning to end. Don't believe a word of it...mind you, long before the Humboldt River is reached, you hear very little of song, or merriment of any kind.
–   National Wagon Road Guide, p16

The author is very upfront about the hazards of the overland route: Indians and Mormons (both implicated in the 1857 Mountain Meadows Massacre2), lack of food for animals and people, and bad weather. The route led through grasslands and over mountains. Time of year, ability to hunt, and foresight in bringing provisions were crucial. It was important to know where the rivers were, not only for navigation and crossing, but also to find water. The guidebook helpfully provides tips, such as 'buffalo chips3 make good fuel when there's no wood.' The writer also warns against rookie mistakes.

The book explains basic concepts that were new to travellers in 1858, such as 'canyon' and 'stampede'. Remember, they hadn't seen hundreds of TV Westerns. It guides the traveller from landmark to landmark, giving distances and summaries: 'Good camping here.' 'A beautiful country, and yet without a tree or bush in any direction...' This is the sort of information a wagon train needs. It also provides us with a snapshot of conditions of the time.

At the end of the annotated list of routes, the author summarises the distances travelled. The route from St Joseph, Missouri, to the California line was 1,794 miles (2,887 km).

In addition, the author provides advice for those who are bringing stock with them – cattle or sheep. It was important to follow the guide carefully to avoid being caught in an area with poor pasturage at the wrong time of year. The author also discusses the advisability of going into mining. He doesn't really recommend it, as it was not the easy path to riches many thought it would be.

This book is incredibly useful. But wait! The author has a final word for would-be migrants that is sure to surprise and delight the modern reader.

Why You Should Get Married First

In an appendix, the author offers some points to consider before migrating to California. Does the young man have good prospects at home? Why, then, stay there and inherit the farm. But if he's looking for new opportunities and is in good health, and can afford $200 for a grubstake, why come on out.

The author has very definite opinions about marital status.

If you are a young man and unmarried, but know of a girl that you love very much, and you are both old enough to get married, either stay at home yourself, or if you come, bring her along with you, as it will be very likely to save you much anxiety, three or four gold rings and no little postage, and probably the expenses of a trip home to get her after all.
– p138

Besides, the key to civilisation is obviously the presence of women. Women know how to organise. They will make you fix up the place. They grow vegetables. And of course, they help with population growth.

Both forward-thinking and socially retrograde, the National Wagon Road Guide is a fascinating historical read.

Before you watch another historically inaccurate Western, go over to Internet Archive and read this book. Then you, too can point at the screen and complain, 'Wrong! I swear that wagon's got springs!'

1The Treaty of Guadalupe Hidalgo gave the US 55% of Mexico, including parts of present-day Arizona, California, New Mexico, Texas, Colorado, Nevada and Utah. California became a state on 9 September, 1850. Yes, this was a landgrab of monumental proportions.2In September of 1857, there was a mass murder of 120 members of a wagon train in Utah. The United States and Utah almost went to war.3Buffalo chips are pieces of dried manure that can be used as fuel. Using dried manure from bovids or camelids as fuel has a long history and is common around the world except, oddly, in Europe. European settlers in North America seem to have learned this useful trick from the Native Americans.