'Loving Vincent' - the Animated Film Content from the guide to life, the universe and everything 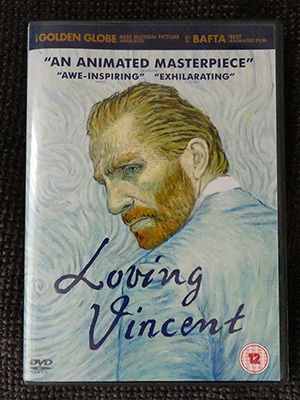 Loving Vincent is a 2017 animated film that tells the story of artist Vincent Van Gogh's final days. Notable for being the first feature-length animation with each of its frames being an oil painting, it took a team of more than 80 artists two years to produce the 66,960 images that were required. The artwork was inspired by 94 of Van Gogh's own paintings, plus flashback scenes in black and white.

The story is set a year after Van Gogh's death on 29 July, 1890, from gunshot wounds. Armand Roulin, the son of the postmaster, is tasked with delivering a newly-found letter from Vincent to the family of his brother Theo (Theo had died of syphilis on 25 January, 1891). During his investigations, Armand meets the people Vincent had known and painted portraits of, including art dealer and paint shop owner Père Tanguy, plus Dr Gachet and his daughter Marguerite. Armand learns more about Vincent the artist, and more about Vincent the man. He begins to suspect that Vincent's death was murder, rather than suicide as Vincent had claimed before succumbing to his injuries.

The film was directed by Dorota Kobiela, an artist and animator, with writer and producer Hugh Welchman. The animation was created by first filming the scenes in live action with CGI backgrounds, then creating oil paintings from the film1. Oil paint dries slowly, so many paintings could be reused for several frames by redrawing the moving characters while keeping the background the same.

The film was successful at the box office - its budget was around $6 million and it earned more than $42 million. It was released on DVD in 2018 with extras including a short documentary about the making of the film and an interview with Douglas Booth. It was nominated for the Best Animated Feature Film Oscar and BAFTA in 2018, but lost to Pixar's Coco in both cases. However, it did win awards at the 2017 European Film Awards and the Shanghai International Film Festival.

1Creating animation from a filmed original is called 'rotoscoping'.2Known for playing Roy in TV series The IT Crowd (2006-13), he has had roles in numerous films including Bridesmaids (2011) and Thor: The Dark World (2013).3Known for playing Pip in the 2011 BBC adaptation of Charles Dickens' Great Expectations and Mr Bingley in Pride and Prejudice and Zombies (2016) among other roles.4Who went on to play Pawel Piotrowski in Znaki (Signs) (2018-20) among other roles.5Known for the role of Corporal Paddy Garvey in Soldier Soldier (1991-95), for example.6Known for playing Hanna in Hanna (2011), Lady Bird in Lady Bird (2017) and Jo March in Little Women (2019) among numerous other roles.7Who played Demelza in Poldark (2015-19).