Deadly Life Insurance Schemes Content from the guide to life, the universe and everything 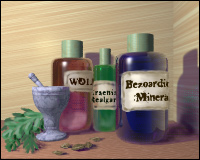 Insurance has long been important to provide financial protection in difficult circumstances, and life insurance enables people to provide for their families in the event of their death. However, there is a risk that people may be tempted to engineer the difficult circumstances in order to claim the insurance money. In the case of life insurance, that means people may be tempted to commit murder.

The earliest surviving life insurance policy in the UK was sold in 1583 and insured the life of William Gybbons - Gybbons died within 12 months and more than £350 was paid to one Richard Martin, 'Citizen and Alderman of London'. The reason why Martin paid about £30 for the policy, and the cause of Gybbons' death, were not recorded.

Although the exact circumstances in that case are not known, there are numerous cases of life insurance-related murder that have been proven since then. This Entry will highlight a few of them.

Many infamous historical poisoners committed their crimes with the motive of claiming insurance money. While Thomas Wainewright used strychnine on his victims, others (such as Mary Ann Cotton) used arsenic as it could be obtained from flypaper that was widely available in the 19th and early 20th centuries.

A series of insurance-incentivised murders occurred in Liverpool in the 1880s1. In the area called Vauxhall, measuring about a quarter of a square mile (0.6km2), at least 17 people with life insurance died in suspicious circumstances between 1880 and 1883.

Various methods were used to cover up the crimes. Sometimes the victims willingly agreed to a life insurance policy being taken out on them, but sometimes insurance policies were taken out on people without their knowledge - other people would impersonate them when an insurance agent visited, or policies would be chosen that didn't require the insured person to be examined by a doctor. Many people in the area were unable to write their own names, so an X was easy to forge. Neighbours would pretend that they were a relative rather than an acquaintance of an insured person, to explain why they should be a beneficiary of the life insurance policy. Several different insurance agents and doctors were approached at different times, to reduce the risk that someone would spot the pattern in the events.

The circumstances of the time also made it easier for the crimes to be committed. Agents received a commission from each policy they sold, which gave them an incentive to be less careful in their identity checks than they should have been. Similarly some of the doctors were not as careful as they could have been, as they received more money for private patients than for attending to the poor of the parish, which the insured people were. They often made a diagnosis (eg dysentery or pneumonia) based on a (misleading) description of symptoms by the perpetrators, rather than by direct examination of the insured people who had fallen ill. After the insured people died, the doctors were not rigorous in checking to see if the manner of death was consistent with the diagnosis, and sometimes didn't even see the body before pronouncing the cause of death. Post mortems after exhumation revealed arsenic poisoning.

Of all the people living in the area at the time with involvement in the insurance schemes, only sisters Catherine Flanagan and Margaret Higgins, nee Clifford, were convicted of murder (for the death of Thomas Higgins, Margaret's husband2, plus three others 'by way of similar fact'3). They were hanged in Kirkdale Gaol on 4 March, 1884. Waxworks of them were exhibited at Madame Tussaud's in London. The case was referred to the Home Secretary4 to investigate 'the system of Life insurances which has originated these wholesale murders'.

Although various changes to life insurance policies had occurred since then5, such as verifying the identity of the people being insured and checking that the beneficiaries have more of an interest in the insured person living than dying, people have been convicted of insurance-incentivised murders in subsequent centuries.

In Massachusetts in 1974, poison featured in the death of Edwin Bacon, a man who had taken out life insurance to protect his family in the event of his death. The insurance company received a request to change the beneficiary from his family trust to a business colleague James Blaikie, and Blaikie signed the form to say he had witnessed Bacon's signature. After Bacon was found in his office, killed by cyanide poisoning, ostensibly by suicide, suspicions arose when both Blaikie and Bacon's wife Adelaide made a claim for the insurance money. Investigations discovered that the signature on the form was a forgery. Blaikie was not charged with the murder of Bacon, but was jailed for other offences. Adelaide Bacon sued the insurance company for negligence, but it was judged that the company exercised reasonable care, as it was not unusual for beneficiaries to witness an insured person's signature, and expert handwriting analysis was needed to be able to tell that the signature was not genuine. However, the original insurance policy was still valid, so the family trust was awarded the insurance money.

In 2016 in Lancashire, Mohammed Yousaf, a father of two, was persuaded by his new wife Rukhsana Bibi to take out life insurance with her as the beneficiary. Within six months, he was beaten and killed by Muhammed Arif, the married brother of Rukhsana's ex-husband, who was having an affair with her. The pair were sentenced to life imprisonment. The insurance policy was judged to have been fraudulent, so no money was awarded.

Other people have survived attempts to murder them for their life insurance, and helped to improve the safeguards that aim to prevent such crimes.

For example, in Hull in 2013, a hitman was hired to kill Andrew Burr, a man whose wife persuaded him to increase his life insurance policy and paid the premiums for him even after they separated. The hitman instead went to the police. The man who had hired him (who was having an affair with Burr's wife) was convicted of conspiracy to murder and a string of other charges.

In 1990 in Florida, Edmund Bodine sued his insurance company for damages after having had to go into hiding in 1983 when the FBI discovered a plot to murder him for his $2 million life insurance. He and his colleague Philip Yordan, who had both had insurance taken out on them by William Stroup, asked for the policies to be cancelled in November 1983, but it took a lawyer's demand to the president of the insurance company before the policies were cancelled in December 1983. The insurance company was judged to have been negligent and was ordered to pay Bodine $75,000 for lost earnings, $2,000 for out-of-pocket expenses and $1,000,000 for pain and suffering.

1As described in The Black Widows of Liverpool by Angela Brabin (Palatine Books, 2009).2Five life insurance policies had been taken out on him, and a post-mortem examination found he had been poisoned with arsenic.3Thomas's 10-year-old daughter Mary (insured once), 18-year-old Maggie Jennings, a domestic servant (insured four times), and John Flanagan, Catherine's 22-year-old son (insured five times) - all found to have been poisoned with arsenic.4The Government minister responsible for law enforcement.5Not to mention changes to the sale and use of poisons.