Old Mother Redcap - Poll Jones, Friend to the Pirates Content from the guide to life, the universe and everything 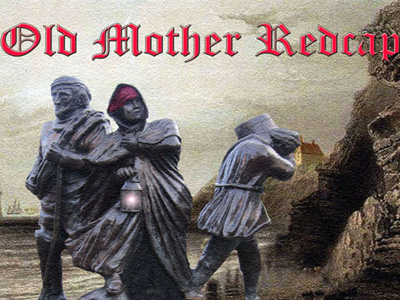 Old Mother Redcap
Wicked old witch.
Ill gotten gains
Once made her rich.
Host of a tavern on the Mersey Sands.
Blood of the mariners
Red on her hands.
- Wirral legend

On the banks of the River Mersey once stood an unimposing white, stone-built, cottage. Built in 1595 by the Mainwaring family, the walls of the building were nearly three feet (1m) thick. A dry well shaft led to numerous tunnels that connected the shoreline to various parts of Wallasey and Liscard on the Wirral Peninsula. The house had been renovated and enlarged over the years, most noticeably in 1888 when the new owner Joseph Kitchingham, a local lawyer, discovered the hidden side to the old building. Sadly Kitchingham had many of the tunnels and secret rooms filled in and bricked up during the renovations. From then on it had a varied occupancy, becoming an Inn, a café, a convalescent home and a nightclub, falling into disrepair and ruin, and was eventually demolished in the 1970s, whereupon a residential home was built on the site.

But it was way back in the 1700s when this building became infamous as simply Mother Redcap's. The proprietor at this time was reported to be a somewhat frail elderly lady, often noted to be sporting a red hat or headscarf. The Inn was a haunt for some rather dubious sailors who frequented the area at the time.

Poll Jones, aka Old Mother Redcap, was a friend to the pirates, smugglers and privateers1 who flooded the ports in the area. It is believed that, for a share of their plunder, Poll would secrete the stolen treasures in the walls and tunnels of the premises whilst the sailors were at sea. Many believe that Poll was banker to the privateers, offering a secure hiding place and earning the trust of many of the shadier seafarers, and a small fortune in the process.

The building itself, whilst being renovated in the 1860s, was found to boast a thick, solid oak door with heavy nails, and shutters and bars on the inside. A trap door featured immediately behind the front entrance; when opened it would mean a nine-foot (3m) drop for any unwanted visitors. A fake weathervane was used to signal it was safe for pirates and privateers to enter, or turned the other way to indicate danger from the authorities. Numerous bolt holes in the walls offered hiding places for loot. The dry well and connecting passageways provided both secure hiding places and a means for goods to be transported in and out of the area without being seen.

The tavern was a popular haunt for many privateer crews in the late 1700s, ships such as the Red Cap, Nemesis and Alligator all moored and frequented Poll's, either to hide their loot or hide from the pressgangs that roamed the area.

Other legends say Old Mother Redcap ran a group of criminal wreckers who lured unsuspecting crews to ruin upon the shoreline, waving red lanterns in the night from clifftops. The navigators would believe they were following the stern lights of other vessels onto a safe course into port, only to be dashed against the rocks and their cargoes spirited away to the Inn.

Upon her death, local legends state Poll Jones had a fortune in golden guineas hidden in her buildings and tunnels, but she died with no known estate and no money. The treasure has never been found. Even to this day, locals search for the treasure of Old Mother Redcap, believing the tunnels beneath Egremont Parade hold a pirate's hoard.

There is a statue to her in Liscard Village and local companies still arrange pirate treasure-seeking tours in the area. (2020)

1A privateer was basically a pirate operating under the authority of a government. These ships carried out military operations with authorising papers from whatever government required their services at sea. Some pirates were in government employ but held no official papers so were classed as pirates not privateers.