The Koan, Newport, Isle of Wight, UK Content from the guide to life, the universe and everything 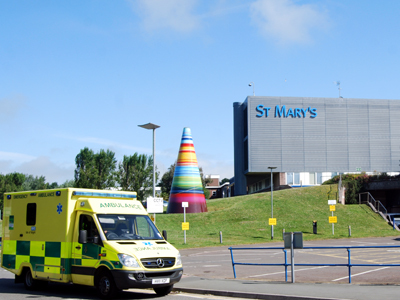 Defiantly standing at the front of the entrance to St Mary's Hospital is the Koan. This is a colourful but controversial gurt big lump of broken rock1 that doesn't work. Installed in 1997, it is 27' (8m) tall and 13' (4m) wide at the bottom. The artist Liliane Lijn promised it would light up like a Christmas tree and revolve, but the motor broke almost instantly so it never has spun round. What it has successfully done is put Islanders in a spin.

St Mary's Hospital2 is just outside Newport on the Isle of Wight and remains the last surviving hospital on the Island. For several decades the hospital has been underfunded and often mentioned in reports of hospitals likely to be closed. The only reason it still exists is that if it closed every Accident & Emergency would necessitate either ambulances waiting in the car ferry car parks for the next available car ferry, which in the middle of the night may involve a wait of a few hours plus the discomfort of a sea crossing, or numerous air ambulance helicopters would need to constantly fly backwards and forwards across the Solent, which is uneconomical.

Instead it has remained open, but as one of the country's most underfunded hospitals. Even today (2020) the Isle of Wight has been identified by Oxford University as one of the UK's five3 'Hospital Deserts', based on hospital capacity and number and age of the local population.

Every time Islanders, predominantly ill or elderly, need the use of hospital equipment that is not located at St Mary's Hospital, it requires a trip to the mainland. Throughout the 1990s there were several fundraising campaigns to raise enough money to purchase various pieces of vital hospital equipment such as kidney machines and other machines that go ping.

In 1997 the hospital held an urgent fundraising appeal for a scanner when they were given an unexpected, and unwanted, 'donation'.

When The Saints Koan Marching In

In February 1997 the Koan was dumped outside the main entrance to St Mary's Hospital, with the Isle of Wight NHS Trust quickly issuing a statement that it was nothing to do with them. It was reported that this cost £55,0004, paid for in association with the National Lottery and Arts Council through Healing Arts, a charity which promoted healing through the arts. Islanders prefer the idea of healing through having a fully-equipped hospital. Ones with scanners and other devices which mean that, if you are ill, you don't get shipped off overseas to the mainland. The response from Islanders was immediate – a petition quickly circulated on the Island asking for the Koan to be removed and the £55,000 instead being put towards the Scanner Appeal.

Unfortunately the Arts Council failed to answer queries asking why it hadn't given the money direct to the Scanner Appeal and instead issued a statement that they would not remove the Koan unless they were given the money back that they had spent on it. The Arts Council to this day are viewed as another group of patronising mainlanders who think they know what is best for the Isle of Wight without showing any interest in actually listening to anyone. And so the unloved lump remains. Every ten years the Lottery pays for maintenance, leading to unfulfilled speculation that it may one day actually revolve as promised.

The artist Liliane Lijn has a quote on her website stating:

In order to 'see' her inventions, Lijn has experimented widely and wildly across mediums and materials, notably, incorporating machinery, light, and language in her work.

It is noteworthy that she doesn't claim that her experiments in incorporating machinery actually results in it working. The description of the Koan itself states:

[Cones] signal a no go area or a diversion. Lijn saw them on roads as a child and they became an emblem of the road for her. The road itself signified departure, adventure, change. The striped cone therefore became a signifier of change.

This presumably means that she believes St Mary's is a no-go area and patients have to both divert and depart the Island and go on an unnecessary adventure to the mainland when they are at their most vulnerable, because money's been spent on a stripy stone rather than life-saving equipment.

Also, according to the artist the Koan is officially the Land Sea Light Koan5. No one has ever called it this except the artist. Oh and journalists, who presumably are paid per word.

1Technically a composite fibre skin reinforced with steel. 2The hospital evolved out of the old workhouse.3The other four being Northumberland, Powys, Rutland and Suffolk, none of which are isolated from their neighbouring districts in any way near the same degree.4Bear in mind that £55,000 was a lot of money in 1997 - the average UK house price compared to an average house price of £250,000 today.5To distinguish it from the other Koans that have been made.