Horseshoe Crabs and the Harvesting of Their Blue Blood as a Medical Resource Content from the guide to life, the universe and everything 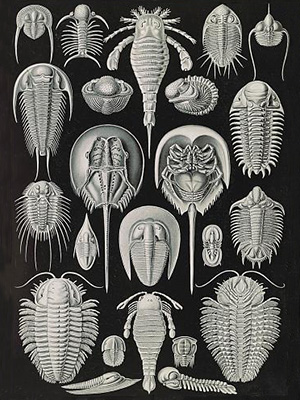 Horseshoe crabs1 have existed on Earth for at least 445 million years2. There are four different species alive today - three Asian: the mangrove (Carcinoscorpius rotundicauda), the Indo-Pacific or southern (Tachypleus gigas), and the Chinese, Japanese or tri-spine (Tachypleus tridentatus), and one American: the Atlantic (Limulus polyphemus). They have pale blue-coloured blood due to the presence of copper-based hemocyanin, which makes them pretty special in the animal kingdom. There are other blue-bloodied creatures like lobsters, snails, spiders, octopuses, squid, cuttlefish and the humble woodlouse, but Horseshoe crab blood has a unique quality. It contains a protein known as limulus amebocyte lysate (LAL), which coagulates (thickens) when it comes into contact with bacteria and other impurities, and scientists utilise it to test if new medical treatments are safe for human use. Pharmaceutical companies have been harvesting Horseshoe crab blood for medical use since the 1970s - a litre of it is worth around US$15,000 (£11,900) to the medical industry today. This precious substance is at the forefront of the global search for a vaccine to protect people against the coronavirus disease 2019 (COVID-19). What technicians in LAL facilities do is hook the crabs up to machines which extracts up to 30% of their blood from a vein close to their heart. Some half-a-million crabs a year are bled in this way. They are then returned to the original suppliers, who are tasked with setting them free.

One of my suppliers built a water slide to put the crabs back into the water. They love it!3
- John Dubczak

John Dubczak, director of operations at Charles River Laboratories, a LAL facility, states that the mortality rate for crabs used in his business is just four percent, but conservationists believe mortality rates for the LAL industry as a whole are closer to 30-40%. Typically, Horseshoe crabs reach adult stage between nine and 12 years old and they can live on land for up to four days if their gills are kept moist. Even if captured crabs manage to overcome the stress of being removed from their natural aquatic environment, being handled, transported to a lab, bled, then dumped back in the ocean, it's doubtful all would recover enough to propagate their species.

There's not very good science-based information on the mortality of the crabs. I've see figures range from 15 percent to 40 percent but nobody has a really good handle on that.
- Michael De Luca, senior associate director, Institute of Marine and Coastal Sciences, Rutgers University

In 2016, recombinant factor C (rfC), a synthetic alternative to LAL, was approved in Europe. Some US drug companies began using it, but in June 2020 the American Pharmacopeia declared it unsafe for use in the US. The manufacturing of a COVID-19 vaccine for human clinical trials, commencing in July 2020, will therefore have to utilise Horseshoe crab LAL if they wish to sell the vaccine to the US. There are currently about 30 companies working on a vaccine and each of them has to go through clinical testing. COVID-19 vaccine testing will not require more than a day's worth of LAL production, according to the Swiss manufacturer Lonza. John Dubczak agrees:

This places no undue burden on the [LAL] supply chain or horseshoe crab populations.

Glenn Gauvry, president of The Ecological Research & Development Group, is alarmed that hundreds of thousands of Atlantic Horseshoe crabs are not returning to their usual spawning grounds. He has estimated that a total of 600,000 mating pairs at the turn of the millennium had crashed to only 100,000 pairs in 2016. Their eggs are laid on land and buried in the sand. Some eggs are left exposed but they're an important part of the ecosystem because they provide a rich source of protein for migrating seabirds such as red knots and ruddy turnstones. Asian Horseshoe crab numbers are significantly declining due to climate change, overfishing, pollution and habitat loss. In August 2016, approximately 500 dead Horseshoe crabs were washed up on Japan's southern beaches. The cause remains a mystery at the time of writing. Asian countries such as China and Thailand value the crab eggs (roe) as an aphrodisiac, and the crabs themselves are used as bait by fishermen. If the three Asian species were to decline to the point of extinction, it stands to reason that demand for the Atlantic Horseshoe crab would skyrocket.

There's no doubt that Horseshoe crab blood is important to human health and it will always be in big demand unless a proven-safe substitute is found. The genie is out of the bottle. Horseshoe crabs are now close to officially being categorised as an endangered species. What a travesty it would be if these prehistoric survivors were to become extinct on our watch.

1They're not crustaceans like true crabs, they're arthropods more closely related to scorpions and spiders.2Lunataspis aurora, ancestor of today's Horseshoe crabs, were swimming in the oceans during the Late Ordovician period - that's well before even the dinosaurs made an appearance.3Although quite how you could tell if highly stressed, blood-drained and possibly injured crabs were enjoying themselves beggars belief.