An h2g2 Bluejay Yarn: Colourful North American Birds Content from the guide to life, the universe and everything 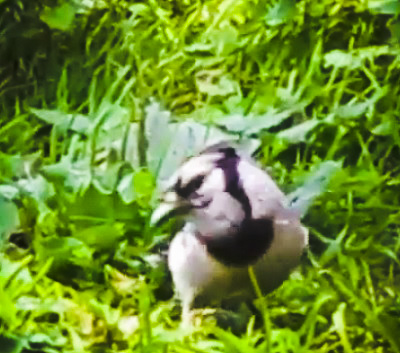 They're blue and white, they're clever, they're lively, and they're noisy. If you live in the eastern/central United States or southern Canada, you'll spot them in spring and summer, if not all year round. Mark Twain wrote a famous story about them. We're talking about the bluejay, or Cyanocitta cristata1.

Bluejays are passerine birds: that just means their feet allow them to perch on branches. They belong to the corvid family, which includes ravens, rooks, crows and magpies. Corvids are very clever birds, and the bluejay is no exception: it's good at outwitting the 'jay and squirrel-proof' feeders put out by snobbish songbird fans. The bluejay is a songbird, too, by the way, with a healthy repertoire. You can hear some calls here. Jays can imitate hawks, which is a sneaky talent. When hawks are heard, other birds scatter. The jay who imitates a hawk can now feed without competition – at least, until the other birds catch on to the false alarm.

Enough of this anthropocentric talk. Let's collect some science on these birds. 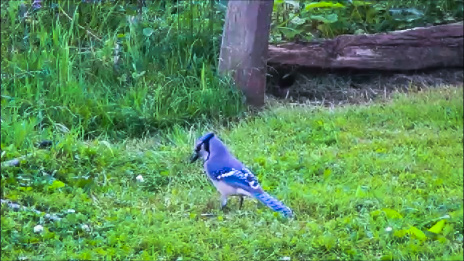 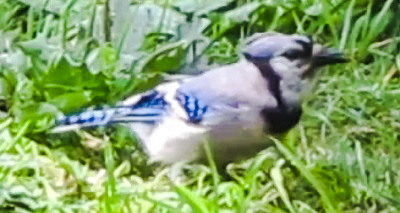 Bluejays are found in plentiful numbers throughout eastern and central North America. They mostly hang around all year, but some migrate south in winter. No one knows why some do, and some don't. They never fly further south than the United States and always migrate by day. Again, little has been studied, perhaps because of lack of curiosity on the part of ornithologists, and perhaps because of lack of bluejay cooperation in studies.

Bluejays mostly eat seeds, nuts, and insects. They will pound hard nuts with their bills to open them. They will come to feeders for suet and seeds.

Bluejays mate for life. Courtship involves aerial chases. The bluejay couple build a nest of twigs, grass, bark, and mud up in a tree. The nest may be decorated with strips of paper, rags, or string. Both male and female birds help incubate the eggs: a nest will contain 4-5 greenish or blue eggs with brown spots. It takes 16-18 days for the birds to hatch, and 17-21 more before they leave the nest.

Bluejays have got bad press in the past. Anti-bluejay prejudice may account for the use of the term 'jeer' to describe a bluejay call. They aren't really making fun of humans when they do this. Want to hear some more bluejay calls? The Audubon Society has some.

While it is true that jays will sometimes rob other birds' nests and eat their eggs, or even kill baby birds, scientific studies have shown this to be a rarer phenomenon than generally supposed2. The bluejay's reputation as a predator is largely unearned. As US Fish & Wildlife expert Les Line wrote in his article for Audubon, 'Slings and Arrows: Why Birders Love to Hate Blue Jays', 'I blame the patron saint of birdwatchers, John James Audubon, for the blue jay’s image problem.' According to Line, Audubon's drawing of bluejays pilfering nests was widely reproduced on 20th-Century insurance calendars, which spread the false image of the bluejay as a lawless marauder.

Spoilsport scientists tell us that bluejay feathers aren't really blue. The feathers contain no blue pigment at all: they look blue because of the way they reflect light. When wet or seen in a strong light, they appear brown. It is to be hoped that this information will discourage humans from chasing bluejays for their feathers: as usual, the feathers look better on the birds.