Emmy Noether - Mathematician Content from the guide to life, the universe and everything 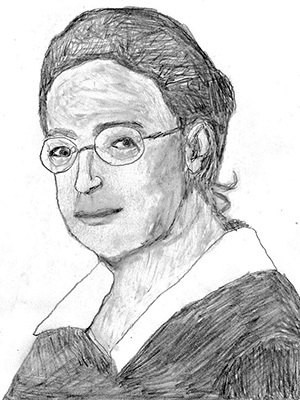 Emmy Noether was an unconventional woman and a brilliant mathematician. In spite of her struggles (simply because of being female) to carve out a career for herself, she made significant contributions to mathematics and mathematical physics and was well regarded by her colleagues and contemporaries, including Albert Einstein.

Amalie Emmy Noether was born on 23 March, 1882, in Erlangen, Germany, to Ida Amalia Noether, née Kaufmann, and Max Noether1. Max was a mathematics professor at the University of Erlangen.

As a child Emmy had a talent for languages, and at the age of 18 she qualified to be a teacher of English and French. However, she had also studied arithmetic at school, and must have picked up some mathematical knowledge from her father and brothers2 so she applied to the University of Erlangen to study mathematics and languages in 1900. Like her fellow female predecessors such as Sofia Kovalevskaya, she was not officially allowed to register on a course and had to ask permission from (male) professors to be able to sit in on their lectures. However, she was allowed to take the Matriculation Examination and she passed it, proving that she had the ability to study at university level.

Women were allowed to be admitted to study for degrees at the University of Erlangen from 1904, so Emmy registered and was awarded a doctorate in mathematics in 1907. However, in spite of this achievement she was not able to get a paid job as an academic, because such roles were still not open to women. She was allowed to work as assistant to her father at the University, including helping to supervise his doctoral students, and she continued to do mathematical research. In 1908 she was allowed to give lectures, but only in an unpaid capacity. Her father provided her with some money, but she had to live frugally.

Noted mathematicians Felix Klein and David Hilbert invited Emmy to join them in Göttingen University3 to work on mathematical physics and Einstein's Theory of Relativity in 1915. There she developed what is known as Noether's Theorem4. Amongst other things, this theorem connects the Theory of Relativity with the previously understood laws of Physics by noting that mass and gravity can be viewed as equivalent.

Emmy gave lectures at Göttingen, but only as Hilbert's assistant, and again she was unpaid. She was allowed to become a lecturer in her own right after the First World War but it was not until 1922, when she was 40 years old, that she received a salary for her work. In her research she turned to the field of 'Abstract Algebra' and developed concepts that now bear her name, such as 'Noetherian Rings'. Her lectures were difficult to follow for all but the most dedicated and talented students, but she was well respected as a doctoral supervisor - 'Noether's Gang' would discuss mathematics with her in university and outside, even at the swimming pool, and many of her students went on to have successful mathematical careers after graduation thanks to her support.

The build up to the Second World War intruded on Emmy's work, as she was of Jewish heritage. In 1933 she had her right to teach withdrawn. At first she was patient - her father had died when she was 39, so she was able to live on her inheritance, and she taught her 'Gang' in her own home. However, when she was offered a grant to become a Visiting Professor in Bryn Mawr College Pennsylvania later that year, she accepted it and travelled to the USA. There she also gave lectures at the Institute for Advanced Study at Princeton University, where fellow German mathematicians and physicists who had been unable to stay in Nazi Germany, including Albert Einstein and Kurt Gödel, had found refuge.

Emmy Noether died on 14 April, 1935, of complications after an operation to remove a melon-sized ovarian cyst. Tributes were paid to her by Einstein and her colleagues at Princeton. Her legacy lives on - as well as numerous mathematical objects, her name has been given to buildings, awards and even a crater on the Moon.

1The surname was originally Nöther, but Max chose to use the form Noether for himself and his family.2Emmy's youngest brother Gustav (1889-1928) was disabled so his education was limited, but Alfred (1883-1918) obtained a doctorate in chemistry, and Fritz (1884-1941) became a professor of mathematics.3Emmy had visited Göttingen and sat in on Hilbert's lectures for a time in 1903-04.4For every symmetry in physics there is a conservation law.