The Opposite of Horse Sense: Dick Fellows' Stagecoach Robbery Fails Content from the guide to life, the universe and everything 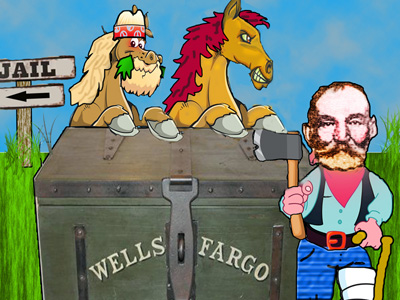 Ah, the Old West: California in its violent prime. For over a century and a half, readers have thrilled to the stories of desperadoes and their exploits, thanks to the dime novel, cinema, and television. The stories aren't all hype, either. Between 1856 and 1913, there were 458 stagecoach robberies in California. That's a lot of 'stand and deliver'. Stagecoach robbers, also called 'road agents', were romantic figures with nicknames like Black Bart. Most of them, that is.

And then there was Dick Fellows. That wasn't his real name. Fellows – stagecoach robber, linguist, occasional newspaper writer, Sunday School teacher, and sometime moral philosopher – was one of the most inept bandits in the history of banditry. His main problem? Horses hated him. They threw him off, injured him, ran away, gave him away, and got stoned. Those horses might as well have been working for Wells Fargo. Horses and Wells Fargo agents were the main reasons Fellows spent so much time teaching Sunday School in prison. But let's back up and get some background on our dangerous outlaw.

Who was Dick Fellows, and What Was He Doing Out West?

Dick Fellows' real name was George Brittain Lyttle. He was born in Clay County, Kentucky in 1845, to respectable people. His maternal grandfather was the Kentucky militia's General Brittain, a War of 18121 veteran and important member of society. His father was a lawyer. George had breeding and education. He also had a wild streak and a drinking problem.

After serving briefly in the Confederate army during the US Civil War2, George went back to reading law in his father's office. But his behaviour was bringing scandal on the family name, and the Lyttles were jealous of their reputation3. George moved to California under an assumed name, and took up hog farming.

A Romantic Life of Crime 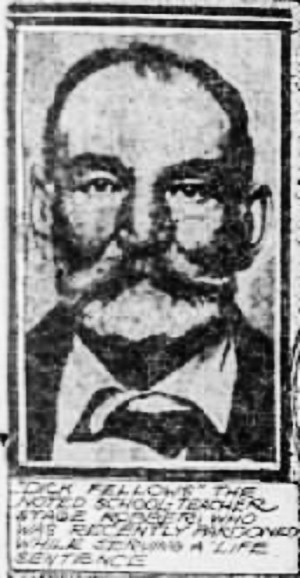 I do not think that your Company should be too hard on me. I have never directed against them particularly any matured scheme for plunder… and if at any time compelled to trespass to supply my immediate wants, I would aim at affluent corporations and never molest poor persons or private individuals. I do not say this complainingly, but merely for the sake of a better understanding...
– George B Lyttle to Mr Hume, Wells Fargo agent, quoted in Bad Company: the Story of California's Legendary and Actual Stage-robbers, Bandits, Highwaymen and Outlaws from the Fifties to the Eighties, Joseph Henry Jackson, 1949, pp 234-235

It is with regret that we note that George was not a successful hog farmer. His hogs kept dying. He was good at languages, especially Spanish. But offering to teach Spanish in Southern California was not a lucrative business. It failed on the 'coals to Newcastle' principle. So George took up stagecoach robbing. Stagecoach robbery was potentially lucrative: where railheads ended, passengers needed to be transported to their destinations (or the next railhead) by coach. The coaches also carried lots of money in their Wells Fargo strongboxes: money that was used to pay workers, keep businesses running, and supply banks in a growing economic sector. All you needed was a pistol, a place to lie in wait, and steady resolve. Oh, and a good, fast horse.

George (as we'll continue to call him) first landed in San Quentin prison in 1870, after a failed robbery. A Desperate Desmond on the road, George was always a model prisoner. Soon he'd talked his way into a job in the prison library. He was also teaching Sunday School. Before you say anything: the biggest enemy in prisons in the Old West was boredom. There wasn't enough to do. Sunday School was very popular. George had a grave manner and convincing line of talk: even the guards wouldn't swear in front of him. He was so good at this kind of thing that they let him out in 1874, four years before his term was over.

He went back to robbing stagecoaches. In 1875, George got wind of a tempting target in Caliente: Wells Fargo was moving $240,000 in gold coin by stage. George duly rented a horse. The horse duly dropped George on his head, leaving him out cold while the stage passed by unmolested. The horse left the scene, as its work here was done.

George woke up, chagrined. He'd missed his big chance. Oh, well: he'd make up for his losses somewhat by robbing the stage on its way back. It wouldn't have so much money on it, but a daring exploit might redeem his self-respect as a road agent. He stole a replacement horse and successfully held up the stage, sending it on its way empty.

He now had a large, unwieldy Wells Fargo strongbox, about the size of a small trunk, and no tools to open it with. When he tried to put it on the horse's back, the horse had had enough. The perfidious beast ran away, leaving George on foot in the middle of nowhere. George decided to hide in some railway construction tunnels nearby and headed that way.

It was dark. The chest was heavy. There was an 18-foot drop George failed to see. He broke his leg, which increased the scope of his problems. Ever resourceful, he hid in the railway tunnel. Using an axe stolen from the railway camp, he prised open the strongbox, which contained a measly $1,800; better than nothing. The next morning, he hobbled off on homemade crutches to a nearby farm, where he stole another horse.

Which proceeded to give him away. Mr Hume, the Wells Fargo agent, had no problem following George's horse, because that horse – the one he picked out of three in the barn – had been shod with one mule shoe. Mule shoes leave different tracks from horseshoes. It was back to prison for George.

From 1875 to 1881, George was again the prison librarian at San Quentin. He spent a lot of time writing letters explaining himself and his motivations to Mr Hume of Wells Fargo and others. He also exposed the duplicity of the Bakersfield sheriff: the scoundrel had taken $500 of the stagecoach money as a bribe, and still not helped George to escape. What was the world coming to?

In 1881, George was out. Within two months, he was back to robbing stagecoaches. Did he get caught? Of course he did. Was a horse involved? Guess.

Hume of Wells Fargo and a team of agents were sure the recent spate of robberies was due to George. They formed a dragnet and tightened the circle around him. Constable Burke of Santa Cruz arrested George. If Burke had been cleverer, or George less canny, the story would have ended there, and without a horse this time. But Constable Burke was susceptible to flattery. George gave it to him, in spades, admiring how clever the lawman was for catching him. George stood the drinks – then knocked the constable out with his manacled fists and ran away. He was recaptured. Undaunted, George stole a gun from another lawman and escaped once more.

If only the horse he then stole hadn't been eating 'locoweed'4. It does no good to threaten a stoned horse with a pistol, and the horse was perceptually impaired, anyway5. When George tried to mount him, the horse put up quite a fight, much to the amusement of the bystanders who detained the frustrated outlaw. It was off to prison again for George Lyttle, for the third and final time. This time, he went to Folsom, where he soon became an instructor in the Department of Moral Instruction.

I have tried hog-raising and stage-robbing, the instruction of moral philosophy and literature. The first two were failures, the third hardly profitable.
Whether the last is a success I leave the reader to judge.
– Dick Fellows, Folsom State Prison, 14 June, 1894, quoted in California Desperadoes: Stories of Early California Outlaws in Their Own Words, by William B Secrest, 2000, p 172

1Not to be confused with the Franco-Russian War of 1812.2Very briefly. Lyttle was in and out in a matter of months, having been captured, imprisoned, and paroled in nearby Ohio in 1863. One source claims he was in the 13th Kentucky Cavalry, which would explain the brevity of his career. Horses saw George coming.3Even years later, they were lying to local historians. The 1922 History of Kentucky, vol 5, by William Elsey Connelley and Ellis Merton Coulter contains this: 'G. Brittain Lyttle is a man of high intellectual attainments and has achieved special pedagogic distinction as a teacher of the Spanish language, his professional service having been rendered in the cities of Knoxville, Tennessee, and New Orleans, Louisiana, as well as in various other communities.' We'd call that spin, at the very least.4Marijuana, which grows wild in much of North America.5There is insufficient literature on the effect of marijuana on equine perception to say with any certainty what the horse thought George was. It needs to be noted that cannabis was an ingredient in veterinary medicine as early as the 1880s.