Nora Waln: A Tourist in Nazi Germany, and What She Found There Content from the guide to life, the universe and everything 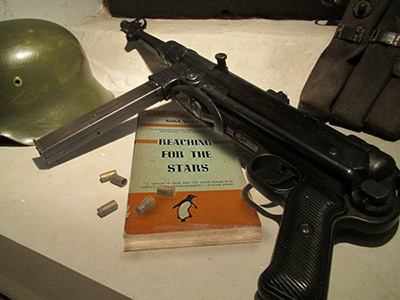 Reaching for the Stars (later released as The Approaching Storm)
Nora Waln, London, 1939.

On solemn days of commemoration we gaze virtually and from a safe distance upon battle scenes of the past. We look back in time (and down, because we're always above and out of firing range) at the beaches of Normandy and think, 'This is heroism.' That collective response is usually followed by another, according to group affiliation: 'See the determination/intelligence/sound planning of our soldiers/sailors/engineers/leaders.' Individually, however, we may also experience a niggling doubt. 'How did humanity get here, anyway?' War is always the result of some catastrophic social, political, or ethical failure, or combination of the above. To understand how those heroes came to be dying on that beach, we have to ask ourselves what caused the Second World War in the first place. And that's harder than it looks.

Some commentators point to growing antisemitism and other forms of race hatred in the 1920s. Others explain that the chaos in post-war Germany (hyperinflation alone drove people to madness and suicide) made the country vulnerable to takeover by gangster rule. Still others, notably historian AJP Taylor1, blame the whole mess on the inherent nature of German social attitudes, which tended to glorify militarism more than other Europeans did, in his British view. All of those factors no doubt contributed to the deaths of millions and the massive suffering of the Second World War. But what about ordinary German people? Couldn't they see the horror coming? Why didn't they stop this runaway regime before it pulled everybody into war?

It might be a good idea to ask someone who was there. Nora Waln, an American writer, lived in Germany from 1934 to 1938. Her book, Reaching for the Stars, has a story to tell. It's fascinating, like watching a train wreck.

A Visitor Crosses the Border

Nora Waln (1895-1964) of Pennsylvania spent 12 years in China. She married there (to George Edward Osland-Hill), acquired a stepdaughter, and witnessed a lot of history in the making, not all of it comfortable. She had a great love for Chinese people and their culture. She'd just completed her bestselling book The House of Exile when her British husband, retired after 28 years as a civil servant with the Chinese Post Office, decided to fulfil a lifelong dream and study music in Germany. In 1934, they crossed the border near Aachen into Hitler's Third Reich.

I have a passport. An American passport. My husband forgot to offer it and he was not asked for credentials for me. … There was considerable concern about my husband's desire to bring in and keep over an indefinite length of time a motor car of English manufacture, but seemingly no concern about his bringing in a woman.
Reaching for the Stars, p 10

Waln had no particular interest in Germany, but went along, as she said, to keep house for her husband. As she soon found that the servants could do that perfectly well, she mostly spent her time getting to know the people and observing what was going on around her. Her husband, who was 'not interested in politics', ignored the Nazis and spent his time at universities and concert venues. It must have been a shock when Himmler threatened his wife. (We'll get there.)

Waln, who grew up in Pennsylvania Dutch country, decided she really liked Germans. Their customs reminded her of home. She enjoyed country weddings and discovered, as many before and after her, that German foresters are hospitable, capable, and will talk to you for hours about nursery management. She loved their music, their literature – even the sentimental Heimatromane ('homeland novels', think Heidi) – and their cuisine. What she didn't like was what Nazism was doing to her new friends.

Daily Life in the Third Reich

Dissatisfaction was met but accidentally, and tragedy apparent only when stumbled on.
Reaching for the Stars, p 91

Waln was raised by pacifists, but she was taught not to be critical. She listened to her Nazi friends and her anti-Nazi friends, and initially decided that there were probably fine people on both sides. It bothered her to find out from the broker showing her a house for rent in Cologne that it was becoming vacant due to the sudden dismissal of its owner, conductor Hermann Abendroth. Abendroth wasn't Jewish, just liberal. (He later joined the Party and got another job.) She shrugged this off and rented an apartment, but the uncomfortable realities kept intruding on her enjoyment of life. A book club luncheon was interrupted by the news that the hostess' twin brother had returned from five days in custody.

'He has signed a contract – sold the publishing business Grandfather and Father built up – given it in exchange for a farm.'
'Is Karl all right, Sybilla? Normal?'
Ruth had come in. 'Mother says he is like a man shell-shocked. Mother was a nurse in the War. She – she says he – he needs quiet.'
Reaching for the Stars, p 90

And then life went on. Waln found people so afraid to voice an opinion that they paled if they feared they'd said too much. There was little wonder: one shopkeeper explained to her customer what could happen if one uttered any 'negative' thoughts.

She had met a friend on the street who had asked 'How is business?' and she had answered, 'Bad – practically non-existent.' This conversation had been overheard by a boy of fifteen, son of her nearest neighbour.
He had reported it at the next meeting of his Hitler Youth Group.
[…] 'Every workday morning, for six weeks, I have to present myself at the ward office of the Party. I must be there promptly at eight o'clock and wait until the official is ready to receive me. He is a young man, about twenty-six, always sleekly groomed. I have to say Heil Hitler! as I open the door into his private office, giving the Nazi salute as I go in. Then I must stand before his desk – he remains seated – and raising my hand in the salute hold it there while I repeat Heil Hitler! Business is good to-day!
Reaching for the Stars, pp 63-64

Why didn't people rebel against this sort of petty tyranny: ridiculous rules made up by uneducated bureaucrats, informing by overzealous, brainwashed teenagers, denunciation by envious neighbours? The local tradespeople explained. They had businesses they depended on for survival. They had families. What would their children do if they ended up in a concentration camp? Maybe this would all blow over soon.

By Christmas, Nora Waln wasn't so sure it was going to blow over. That was when the Christmas Eve festivities she was attending – a private evening at an aristocratic family's chateau – was interrupted by the butler's refusal to serve dinner. His reason? There was a 'Jewess' present. (The lady in question was a third-generation Catholic and a war widow.) The butler waved aside threats of dismissal, replying that he had records of all the family's telephone calls and proof that they were 'international pacifists' who read The Times2.

The horror stories kept piling up. Some things she witnessed, others she heard about. Hearing could be almost as hard on the nervous system.

I came round to find the narrator [of a harrowing, but true story] splashing cold water on my face. She herself was crying quietly. 'You have got to learn to steel yourself against shock. This thing isn't going to end in Germany – or in Europe.'
Reaching for the Stars, p 80

Nora Waln began to see how people could fall into this kind of silent complicity with an evil system. Like her husband, many were more eager to enjoy the good things that life offered than to look for problems to solve. Others had more pressing concerns, like making a living. Most feared their neighbours: potential informers were everywhere. It was better to say nothing critical – as the Germans told her, 'Sprich durch die Blume': speak through the flower, say only good things about those in power. That, of course, was the way the Nazis wanted it.

Rabbits nibbling in a field of clover display no corporate concern when a weasel slips in among them. ... Individually anxious, the rabbits hastily hop aside from the path the quiet weasel is pursuing towards his selected victim. Crouched in hiding, they are still, heedless to the piteous death-cry of their fellow. When the weasel has gone, the remaining rabbits soon present a tableau of contentment on the meadow, a pretty pastel in fawn and green.
Reaching for the Stars, p 60

To use another metaphor, they were like frogs in water being heated slowly. They weren't going to notice until they were boiled alive.

What Did She Do?

Nora Waln woke up to the danger. She took notes. She wrote her book. The manuscript disappeared from her home. For some reason, Waln appealed directly to Reichsführer-SS Heinrich Himmler. Himmler told her, 'You never wrote such a manuscript. You must have dreamed it.' (Defining reality for other people was a Nazi speciality.) Waln and her husband went to England, where she rewrote the manuscript, mailing it to her New York publishers in instalments. The 1939 release of Reaching for the Stars outsold Mein Kampf in an anxious United States. In a moment of defiance which she later deeply regretted, Waln mailed a copy to Himmler with the dedication, 'I have dreamed another dream.'

As Waln herself admitted later, 'It was a foolhardy thing to do, and I shall never cease blaming myself.' Sending that book to Himmler, and taunting him, was a terrible idea. She didn't name names, but it wasn't hard for the Gestapo to figure out who the people in her book were. Two boys the couple had picked up hitchhiking on their first day in Germany, and who later became good friends of Tante Hühnchen (as they called her), had already been shot. Then Waln learned that seven children of her acquaintances had been taken into 'protective custody'.

Waln went back to Germany and met with Himmler. She offered herself as a substitute hostage. Himmler agreed on condition she revise the book to remove criticism of the government, and remain in Germany as a pro-Nazi historical novelist. She refused. 'Words live longer than we do,' was her conclusion as to why. She, her husband, and her daughter lived out the war in England. Afterwards, she returned to Germany both as a journalist and to distribute relief aid on behalf of her college sorority. Of 300 anti-Nazi friends she tried to locate, fully one-third had been murdered. Waln divided her time between trying to help homeless children and lecturing adults on what they had done wrong.

Was this book a good idea? Certainly, the way it was produced and published were not. Is it an extremely valuable document for understanding how whole countries can go wrong? It is. It is unnecessary to approve of the author's attitude to learn major lessons from Reaching for the Stars.

For more information about Nora Waln's postwar activities, see the articles and clippings in The Key of Kappa Kappa Gamma, February 1946.

1A historian once remarked that Taylor's book The Course of German History (1945) should be renamed 'The Curse of German History'.2Officially simply The Times but sometimes known as the London Times outside the UK, this newspaper was particularly hated by the Nazis on the grounds that 'Times' is 'Semit' spelled backwards.