Overtoun House, Dumbarton, Scotland: Dog Suicide Bridge? Content from the guide to life, the universe and everything 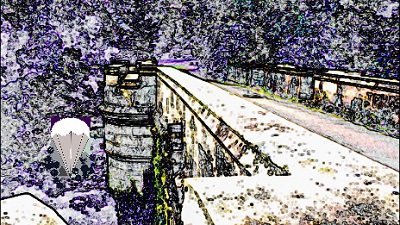 I will never forget the awful whine she made as she leaped.
- Alice Trevorrow, describing the 'suicide leap' of her springer spaniel from the ill-fated Overtoun Bridge in 2014

Overtoun House is a listed building near Dumbarton, Scotland. The stately home overlooks the River Clyde. Once, it housed rich industrialists – one even became a peer. In 1938, it was given to the public. Since then, it has been a convalescent home for soldiers, a maternity hospital, and a Christian youth centre. The house's 'Scottish baronial' style appeals to filmmakers: both Regeneration (1997) and Cloud Atlas (2012) used Overtoun House for location filming.

The property's approach bridge is also listed and picturesque. In recent years, it has become much more famous than the house, for a very sinister reason. It's known as the bridge where dogs commit suicide. Numerous canines have been seen to leap over the parapet and plunge 50 feet to the burn (creek) below. Unlike the springer spaniel in the quote above, who spent time in animal hospital, not all survive the leap. Even the lucky ones can't tell us why they jumped.

So: do dogs commit suicide? Is the bridge haunted? What's going on here?

How Many Dogs? Is the Bridge Haunted?

The number of dogs reported to have leapt from Overtoun Bridge varies considerably. The most sceptical source grants that about half a dozen dogs have jumped off the bridge over a period of 13 years, while the Daily Mail claims that at least 650 have done so in the last half-century, of which 50 died. The answer is probably somewhere in between: as our sceptical source points out, there is no obligation on anyone's part to report a dog suicide officially. Records are bound to be spotty.

However, some dogs have jumped off the bridge. In broad daylight. On clear, sunny days – which, from the point of view of canine preservation, are fortunately rare in Scotland. Why here? What could possibly motivate these deadly leaps?

The answer, say some, is obvious: the bridge must be haunted. There's some evil presence on that bridge. Tales abound, mostly flimsy, of spooky doings at Overtoun House. The oddest thing about the house itself is that it was designed by architect James Smith of Glasgow. This isn't odd per se, but it is a fact that James Smith was the father of Madeleine Smith. In 1857, Madeleine Smith was tried for murder in the arsenic poisoning of her boyfriend. The jury returned a verdict of 'not proven', which is Scottish for 'we think you did it, but the prosecution's case wasn't strong enough'. This alone is not enough to spookify a bridge, even by Most Haunted standards.

It is true that in 1994, a mentally-ill man killed his child by throwing the baby over the parapet. He would have followed, had he not been restrained. This was sad, but not evidence of paranormal activity. The reputation of the bridge as a canine death trap dates back decades.

We have a puzzle: although not necessarily in epidemic proportions, unexplained dog-leaping has taken place on the Overtoun Bridge. Could there be an explanation other than evil, dog-hating ghosts?

Dr David Sands is an animal behaviourist. He doesn't believe that dogs commit suicide – although the question has been considered by psychologists. Before we attribute anthropomorphic models to animal behaviour, it might be a good idea to see whether there is a more species-related stimulus that could motive a dog to jump over a wall.

Sands is not interested in ghosts, but he is interested in how dogs think. He took a look at the bridge – from a dog's point of view. The first thing he noticed was that a dog walking over the bridge couldn't possibly see over the parapet. To a canine, the bridge terrain looks perfectly flat and safe. Not only that, but the humans on the bridge often stop to admire the view. That makes the dog curious.

This doesn't explain why the dogs are jumping over the parapet. What's so attractive on the other side of that wide wall? The answer, said Sands, could be in their noses. All of the dogs reported to have leapt from the bridge were of the long-snouted hunting variety. These dogs have poor vision relative to us, but a sense of smell 100,000 times more powerful than that of a human.

What are they smelling that's so attractive? Mink, said the behaviourist. Mink, in Scotland? Yes. Mink are an invasive species that first escaped from fur farms in the UK in the 1930s. They've been wreaking havoc on the native wildlife ever since. Recently, even wildlife protectionists have agreed to a culling project. In addition to making life difficult if not impossible for the water vole, mink... well, stink. That weaselly fragrance is a supernormal stimulus to the average hunting dog. Dr Sands tested it out on a variety of dogs. You can see the test results on this tv show. Sniffer dogs prefer mink to any other form of rodent scent, apparently, even squirrel. Of course, the smell of mink would be more likely to waft over the bridge wall on a clear, sunny day...

Dr Sands believes he has settled the question of why dogs jump off the Overtoun Bridge. Disappointed ghostbusters disagree, but Scottish locals seem to find the argument persuasive. At least, they were convinced enough in 2015 to post a sign that says, 'Dangerous Bridge - Please Keep Your Dog on a Lead'. The dogs can't read: let's hope the owners pay attention.